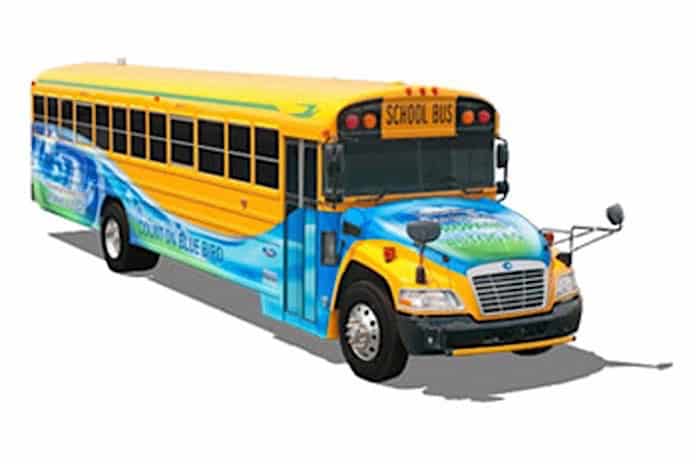 The latest Vision is also a product of an on-going partnership with Ford and ROUSH CleanTech. The ROUSH CleanTech Liquid Propane Autogas Fuel System is fully integrated and designed to work in conjunction with Ford’s 6.8L engine.

The new bus seats up to 77 passengers and offers a 67-gallon, certified steel fuel tank compared to a 60-gallon tank in the Vision diesel model. The propane-powered Vision also outputs 362 horsepower compared to 200 to 260 horsepower in the regular version. Torque also was increased to 457 pounds at 3,250 RPMs. Blue Bird also said the new bus offers best-in-class serviceability, broader optional equipment choices and a five-year/100,000 mile warranty.

The next-generation Vision will be on display during the STN EXPO Trade Show on July 26 in Reno, Nev.

Phil Horlock, president and CEO of Blue Bird, told School Transportation News last month that the next-generation Vision will be a tool the industry can utilize to help meet the pending regulations from NHTSA on Corporate Average Fuel Economy, or CAFE, for commercial, vocational vehicles such as school buses.

“We feel very, very strongly about a green environment,” he said. “That’s why we drive very aggressively our propane programs and CNG programs.”

He added that the propane-powered Vision has been especially successful in California and Texas, states that have been friendliest toward the alternative fuel via credits and tax rebates. Blue Bird also remains the only large bus manufacturer to currently offer propane. Thomas Built Buses announced earlier this year that it expects to make a propane Type C available to customers in time for the 2013 model year.

“We certainly have leadership in that area,” Horlock added.

Blue Bird also partners with Girardin Minibus to produce the Type A Propane-Powered Micro Bird, which began rolling off the production line in January. Collins Bus Corporation competes in that segment with it’s own propane-powered small bus models.