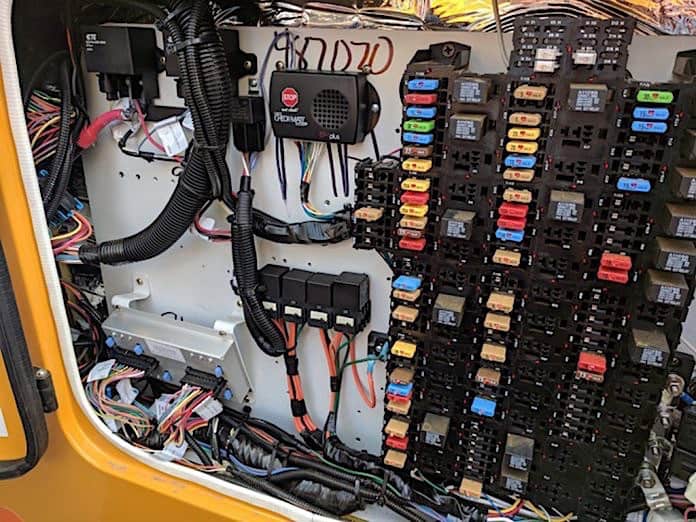 The child-check systems sound an alarm at the end of routes to prompt the school bus driver to walk the length of the bus, scanning each seat in the process to look for students who did not disembark from the vehicle. The California Highway Patrol approved and filed the technical requirement in the state’s Title 13 requirements for school bus equipment at the beginning of this year in response to the Paul Lee School Bus Safety Law that was passed and enacted in 2016.

The law requires all new and existing school buses to have systems that meet the CHP specifications by the beginning of the 2018-2019 school year. That meant no existing child safety alert systems on the market at the time met the specs. The late approval of the new requirements provided vendors with challenges on upgrading their systems and lengthened the time needed to install each system.

Meanwhile, the waiting list for compliant equipment has grown amid a lack of qualified installers, which means in-house school district mechanics must perform the work. Further complicating matters, Sen. Hueso’s spokeswoman pointed out that many school districts provide year-round, home-to-school transportation service, which would require installs be completed by July 1. One such affected district is National School District, an elementary school district near San Diego that first brought the issue to Sen. Hueso’s attention, his spokeswoman told School Transportation News.

The California Association of School Transportation Officials and the California Association of School Business Officials lobbied for a so-called urgency statute to delay implementation from former state Sen. Tony Mendoza. He authored the Paul Lee, law which was named after the 300-pound, 19-year-old, nonverbal student with autism who died Sept. 11, 2015, on his school bus after his driver failed to notice him and left Lee alone on the bus for eight hours in a heatwave.

Mendoza filed the emergency bill to delay the child-check requirements to the 2019-2020 school year, but the legislation fell into limbo when Mendoza resigned his senate seat in February amid allegations of his involvement in a sex scandal. By Feb. 18, Hueso picked up the bill and refiled it as SB 1269, which gave school districts and school bus companies the additional year to comply with Section 28160 of the state’s vehicle code.

A hearing on SB 1269 is expected some time next month.