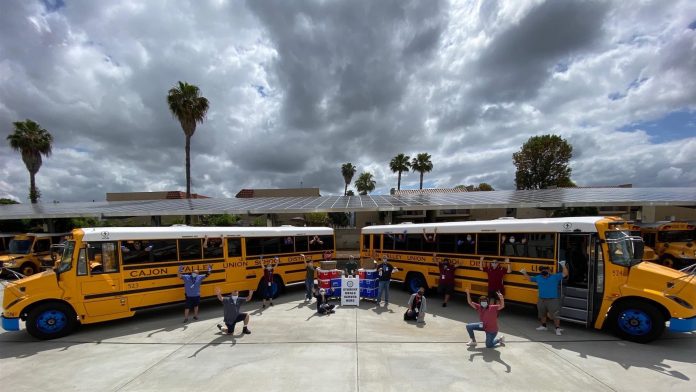 A trailblazing district, CVUSD added solar power to 25 of its school sites and then turned its attention to improving air quality for communities and especially students.

CVUSD Transportation Director Tysen Brodwolf shared that the district services 35 schools in total with 49 buses, five of which are LionC electric buses that have been on the road since 2019. She added that the district is looking to add 15 or more EVs.

“There’s a lot of grant funding out there and there’s more coming,” Buxbaum noted.

For areas where grants are not as readily available, he recommended loans and financing plans. Additionally, the U.S. Senate on Tuesday passed a $1.2 trillion infrastructure package that includes $5 billion for electric and low-emissions school buses. The legislation heads to the House, which has promised even more money for electric school buses.

The Lion buses with blue bumpers and blue wheels draw interest across the district, even among community members like firefighters, Brodwolf said. She added that the students enjoy not only the look and quiet operation of the buses but also the cleaner environment and improved air quality as they ride.

“It’s more than just dollar signs, it’s about the environment and for the future,” Brodwolf stated.

Buxbaum noted that Lion had to retrofit the buses to allow for V2G charging, proving that partnerships are essential for a project such as this.

Despite struggles with grant funding and the complications experienced due to COVID-19, he said it was nevertheless worth it to achieve success in the district’s electrification efforts.

“The biggest thing is patience, and working through issues as they come up,” Buxbaum said. He noted that the district is continuing its electrification efforts by looking to add five electric warehouse trucks.

Brodwolf explained that electrification is a long process – but that’s why it’s important to lean on partners who are invested in seeing the project succeed. She advised webinar attendees to be forward thinkers and plan with an eye on expansion. She added transportation leaders should plan routes based on EV range and have a backup plan in cases of power outages.

V2G can provide power back to buildings and serve as a backup plan if power goes out at the district, added Russell Vare, who serves as director of OEM Partnerships for Nuvve.

The stated range of the district’s electric buses is 100 miles but with additions like air conditioning, the realistic range is closer to 70 miles, Buxbaum said. However, since technology is ever improving, he advised student transporters to track such developments and reevaluate things to see what fits for their operations.

Meanwhile, Brodwolf reported a 40 percent savings in maintenance and noted that electric school buses outlive their diesel counterparts due to having fewer moving parts.

“It makes sense in the long term. It’s a lot of up-front cost, but down the road, I predict these vehicles are going to save us money,” she said.

She added that fleet electrification often takes longer than first thought, but that doing research, being patient, and consulting with peers and partners are essential.

CVUSD sought input from Twin Rivers Unified School District, near Sacramento, California, widely known for its electric bus trailblazing, and received recommendations for the Lion EVs that it eventually purchased.

Nuvve’s Vare explained that the Southern California-based energy company is heavily focused on vehicle-to-grid technology for school buses. He added that V2G supports bus charging and discharging to support the electrical grid – as well as being profitable for school districts who do it correctly.

Nuvve’s software optimizes V2G operation by considering bus charging schedules, market bidding restrictions like time-of-use rates, and more. The company targets cost savings and revenue generation for the district, as well as optimizing bus battery health while guaranteeing that buses will be charged when needed.