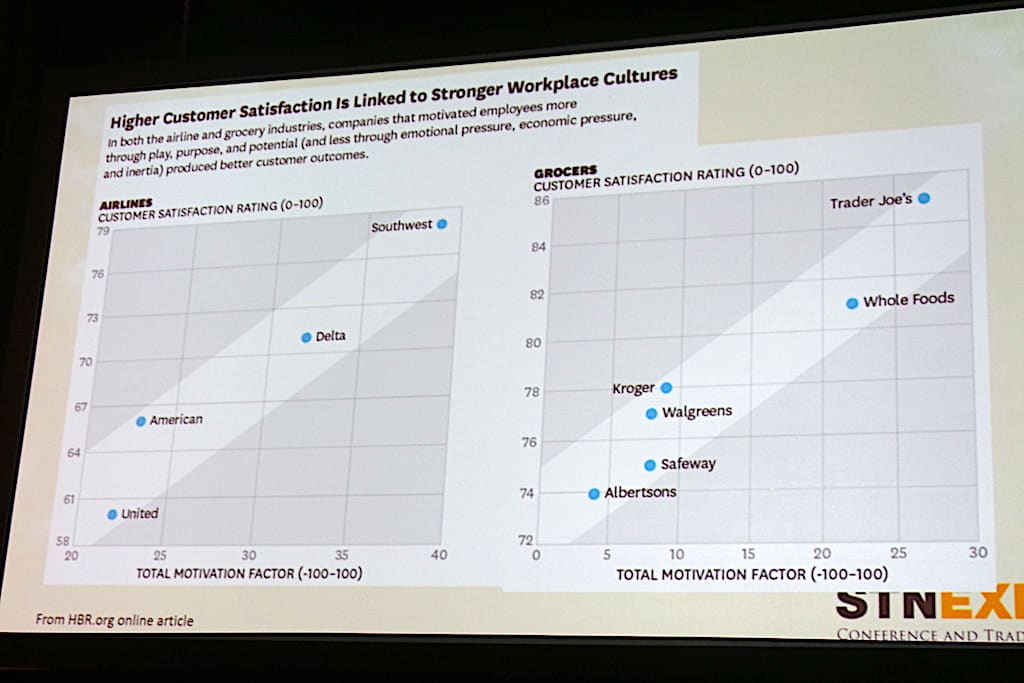 Everyone wants hard-working employees, said the founder and chief innovation officer for People Centric Consulting Group in Jefferson, Missouri during the Monday morning keynote address. But some of the methods commonly used to get them are not the best ones.

“Your job as a manager is not to make people successful; it is to help them succeed or fail quickly,” said Harkey, adding that the best way to do that is through creating a definitive workplace culture.

This starts with inspiration. Harkey showed a video of comedian Michael Jr. observing, “When you know your ‘why’ your ‘what’ has more impact.” Harkey followed that up with the observation that 30 years of research is discovering that why we work determines how well we work.

Good managers don’t just tell employees how to fix problems. Harkey recounted a story in which he consulted for a company and discovered they were throwing away excess product that amounted to $40,000 a year. The manager told Harkey to fix the problem, but Harkey tasked a recent hire with that job. A month later, the employee had cut the waste in half, and three months later he had eliminated all the waste.

Since he’d made his job easier, he went looking for other problems to solve. He was able to find better manufacturers for products they used, and eliminate redundant processes. He went on to save the company $250,000 a year through his improvements.

Harkey showed a chart that compared companies with positive cultures that customers appreciated, like Southwest and Trader Joe’s, with companies with a perceived mediocre or even negative culture, like United Airlines or Albertson’s. He explained that companies with high levels of employee engagement have customers who are more satisfied and loyal. This also results in increased sales.

The numbers for employee engagement in the US are as follows: 33 percent of employees are engaged, 51 percent are disengaged, and 16 percent (or one in six) are toxic. People who work with toxic employees are 54 percent more likely to quit their jobs. Cutting a toxic employee, while undesirable in the short run due to shortages, is much better for your culture, current employees, and company in the long run.

Seventy percent of disengagement is caused by management. Harkey shared the five following tips to create people-centric management and thereby lead the whole company to success.

“Where do you find dedicated employees? They already work for you,” Harkey explained. He finished with three main takeaways: Culture Matters, Management Influences Culture and Train Your Managers.

Hurricane Sally struck the Alabama Gulf Coast as a Category 2 storm, bringing with it widespread flooding and damage that grounded the Baldwin County...
Read more
Government

Speaker Pelosi Vows to Seek Another Round of Coronavirus Relief

Speaker Nancy Pelosi announced on Tuesday that Democrat leadership will seek an agreement regarding another round of emergency coronavirus relief to bring before the...
Read more
Seatbelts

The National Highway Traffic Safety Administration formally denied a request from seatbelt manufacturers SafeGuard/IMMI and C.E. White regarding a 2013 petition to allow for...
Read more
People

Michelle Minor, a school bus driver for Gwinnett County Public Schools near Atlanta, said it’s always been in her nature to help those in...
Read more
Safety

A 7-year-old student was hit and killed by an illegally passing vehicle while attempting to board her school bus just east of Abilene, Kansas....
Read more
Safety