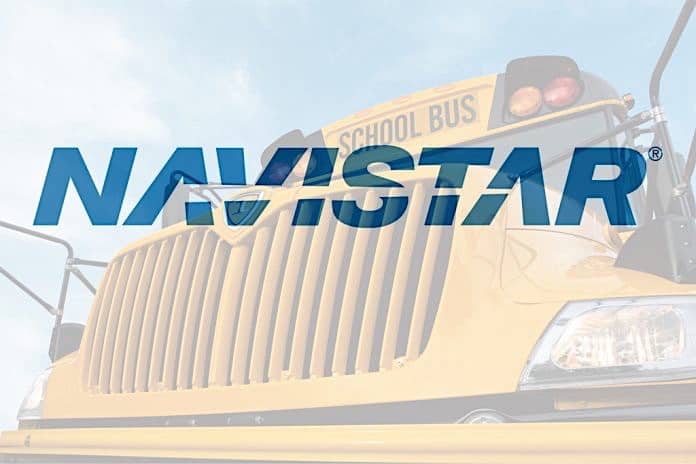 Revenues in the quarter increased 28 percent, to $3.3 billion, compared to the fourth quarter of 2017. The revenue increase was largely driven by a 45-percent increase in the company’s Core volumes, which represent its sales of Class 6-8 trucks and buses in the U.S. and Canada.

“2018 was a very strong year for the industry, and a breakout year for Navistar,” said Troy Clarke, chairman, president and CEO. “We were the only truck OEM to grow Class 8 share during the year. With the industry’s newest product line-up, superior quality and a strong focus on customer uptime, we expect to gain market share in 2019 for the third year in a row.”

The company finished 2018 with strong momentum across the board. During the fourth quarter, the company launched the International CV Series line of Class 4/5 trucks, the only Class 4/5 truck that is designed, distributed and supported by a manufacturer specializing in commercial vehicles.

Additionally, its medium-duty International MV Series and vocational International HV Series built improved order share resulting in a strong backlog. The company reported a backlog of 45,400 units in its Core markets, up from 15,600 at the end of 2017.

In October, Navistar improved its debt profile by repaying its 4.5 percent senior subordinated convertible notes issued in October 2013. Repayment of the outstanding principle of $200 million at maturity was funded with cash on hand.

One year ago, Navistar reported its first profitable quarter of the year with a net income of $135 million, a five-fold increase from the loss of $34 million posted for the same period the previous year.

For the 2017 full fiscal year, Navistar reported a net income of $30 million compared to a loss of $97 million for FY2016. It was also the first annual profit reported by Navistar since 2011, and the company also set a 52-week high for trading on the New York Stock Exchange.

“Our 2017 was a breakthrough year, as we returned to profitability and grew our market share 1.5 points,” said Clarke one year ago.

“While we expect 2019 to be another strong year for Navistar and the industry, it’s important to recognize that Navistar as an investment is much more than just a cycle play,” Clarke said. “As our ongoing improvements demonstrate, the company also has strong opportunities to benefit by recapturing market share, growing parts revenue, improving margins, generating free cash flow and further de-risking the balance sheet. For all these reasons, looking forward, the company is well-positioned to generate superior shareholder value.”

For the fourth quarter of 2018, the Truck segment recorded a profit of $197 million, compared with a year-ago fourth-quarter profit of $112 million. The year-over-year change was primarily due to the impact of higher volume in the company’s Core markets and strong defense results, partially offset by higher commodity and structural costs, as well as the impact of supplier constraints.

For the 2018 fiscal year, the Truck segment recorded a profit of $397 million, compared with a fiscal year 2017 loss of $6 million. The improvement was primarily driven by the impact of higher volumes in our Core markets, higher other income, higher profitability in defense, and a decline in used truck losses.

For the fourth quarter of 2018, the Parts segment recorded a profit of $156 million, compared with a year-ago fourth-quarter profit of $157 million. The results were primarily driven by higher Fleetrite brand sales, offset by higher freight-related expenses and internal allocation of development, engineering and SG&A expenses.

For the 2018 fiscal year, the Parts segment recorded a profit of $569 million, compared to a fiscal year 2017 profit of $616 million. The 8 percent decrease was primarily driven by lower U.S. margins, and higher freight-related expenses and internal allocation of structural costs.

For the fourth quarter of 2018, the Global Operations segment recorded a profit of $4 million, compared to a year-ago fourth-quarter profit of $1 million. The year-over-year change was driven by higher volumes due to improvements in the Brazilian economy, and cost reduction benefits associated with operational restructuring implemented in early 2018.

For the 2018 fiscal year, the Financial Services segment recorded a profit of $88 million, compared to a year-ago fiscal year profit of $77 million. The increase is primarily driven by higher revenues and is partially offset by higher interest expense, an increase in the provision for loan losses in Mexico, and higher depreciation expense on operating leases.