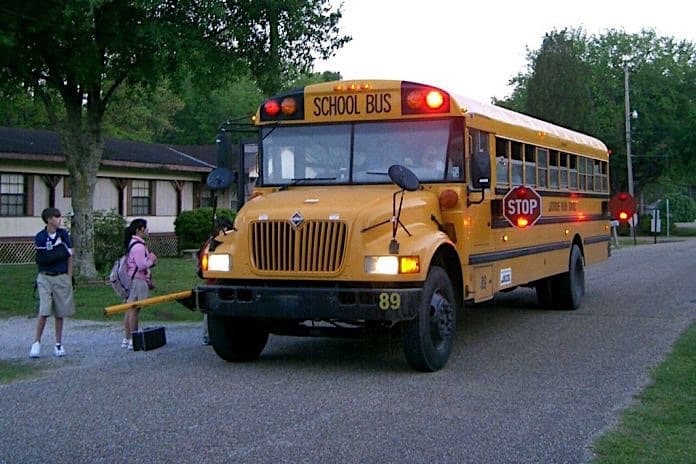 The National Highway Traffic Safety Administration ruled that there will be no altering FMVSS 108 to additionally warn motorists school buses are stopping to load or unload students.

A private citizen, William Thompson III, petitioned NHTSA in 2012 to add an intermediate lamp that transitions from the amber school bus warning lights to the red stop signals that activate when the school bus is approaching the bus stop. Also, when the doors open and the stop arm extends. He requested that the amber and red lights alternately flash for a period of three seconds, to provide further notification to motorists that they must come to a complete stop.

He explained that amber and red lights as currently required by FMVSS 108 “do not effectively communicate when the bus will begin the process of picking up or dropping off children because amber lamps do not transition to red until the bus door is actually open.” This, he reasoned in his petition, creates “uncertainty” in motorists and leads to “risk factors,” such as illegal passing or “panic stops.”

“These risk factors, in turn, could lead to injury or death of children and other road users,” he wrote to NHTSA.

He explained that the school bus driver would actuate the amber lights as is currently required. But as the bus makes its “final approach” to the stop, the driver would actuate the signal warning lamp switch a second time to activate the intermediate signal that would flash for three seconds. The red lights would then actuate as they do now when the loading doors open.

In a denial of petition for rulemaking dated Jan. 12 and published in Friday’s edition of the Federal Register, NHTSA responded that motorist confusion over what the amber and red lights mean does not constitute a safety need that requires amending the standard. The agency added that Thompson provided no data that “persuasively demonstat(es) changes he proposed would lead to a net benefit for vehicle safety.”

Instead, NHTSA wrote that updating the regulations could further confuse motorists when they approach school bus stops.

Thompson cited two NHTSA studies and one each in North Carolina and in Florida. NHTSA said one of its studies, the 1997 “National Survey on Speeding and Unsafe Driving Attitudes and Behaviors” and the “Best Practices Guide on Reducing Illegal Passing of School Buses” contained no empirical data about the frequency or cause of stop-arm violations, contained information relevant to evaluating whether these violations are because of motorist uncertainty about what the signal warning lamps mean and do not advocate changes to FMVSS 108.

NHTSA said the 1997 Florida study concluded that while many motorists do not understand the law, but “many, many more motorists are, in fact, intentionally violating the law.” It led to the North Carolina research that documented occurrences of stop-arm violations, but does not establish the causes for these infractions. A more recent state survey concluded that confusing signal warning lamps are just one of several causes of stop-arm violations.

Charlie Hood, executive director of the National Association of State Directors of Pupil Transportation Services, said the Florida and North Carolina studies led to subsequent, similar surveys of illegal school bus passing, including the NASDTPS annual survey of states that will be conducted for the eighth time this spring.

(STN Podcast E12) – Tool of Equity: Educational Access for all Students Amid COVID-19