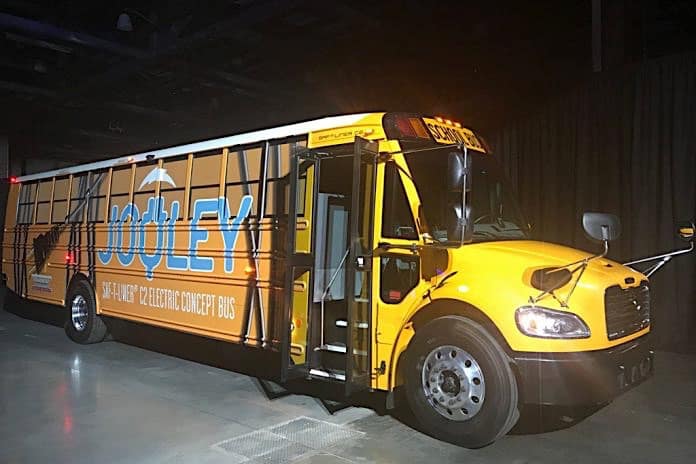 The roll out of the new Saf-T-Liner C2 All Electric School Bus came toward the conclusion of an NAPT general session the company sponsored that focused on the link between passenger vehicles, commercial trucks and school buses when it comes to advanced driver assistance systems. Thomas Built Buses was joined in the presentation by Daimler sister brands Mercedes-Benz and Detroit.

Aptly named “Jouley” after the joule unit of energy, the C2 electric is a first-generation vehicle, though President and CEO Caley Edgerly cautioned that Thomas Built Buses and the entire industry have a ways to go in developing ZEVs past the experimental stage.

“They key purpose of producing this bus is 100 percent to learn,” he told a joint crowd of NAPT and NASDPTS conference attendees. “We have to invest to learn.”

A company spokesman told STN later that the C2 should not be considered a concept school bus, despite the wording on “Jouley,” adding that the manufacturer wasn’t able to remove the lettering before the presentation.

Meanwhile, Edgerly added that the C2 Electric is expected to go into production in early 2019. Thomas manufactured an early electric school bus named “Sparky” in the mid 1990s and about a decade later experimented with hybrid school buses.

The bus features a EDI PowerDrive 7000ev powertrain that provides 100 to 160 kWh of battery energy. The baseline range is 100 miles with an operating range of up to 100 miles between charges. Additional battery packs are available to increase range, the company added.

Leslie Kilgore, Thomas’ vice president of engineering, told the attendees that the C2 Electric completely charges from a zero-charge battery in 8 hours, or about 14 miles per hour.

The batteries, she added are packaged in a safety cage within the frame rails, while Edgerly added that initial testing indicates a 5- to 20-percent fuel economy increase compared to a diesel-equivalent school bus depending on usage and load.

Both he and Kilgore also said Thomas continues to test the C2 Electric to determine how the batteries will respond in real-world operations.