Video technology may be getting more complex, but when the purchasing time arrives, a focus remains on assisting bus drivers 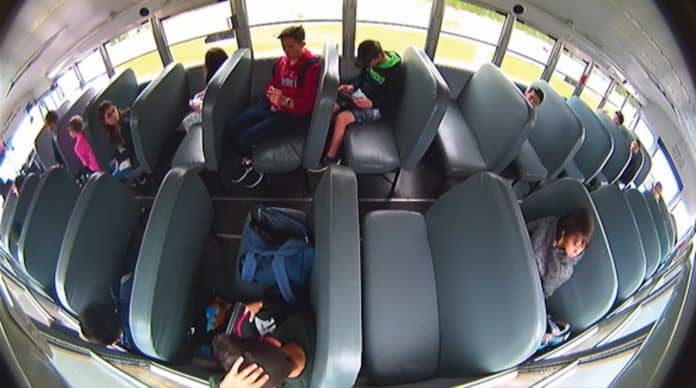 School bus technology is more advanced than ever—and it doesn’t stop marching ahead. But the process of choosing the right solution when upgrading equipment will remain largely unchanged for years to come, say early adopters and industry professionals.

“I don’t believe the decision-making is all that tough. … A carpenter, a mechanic, anyone who uses tools in their job, knows that you can’t go to bed and have a tool magically do your job for you. You have to know how to use them,” explains Caleb Williams, assistant director of transportation at the College Station (Texas) Independent School District. “Technology is another tool in the toolbox. When it comes to technology and the decision-making process, you’re always going to need humans to sort out what’s going to work, or not.”

The important thing to remember about choosing technology solutions is to play the game on your home field, he said. Williams recounted an occasion when a vendor proposed a routing software package for the 12,534-student district.

“I told him, ‘You can show me how it works in some town I don’t know, but show me how it works in my town,’” Williams explained. “He did and I said, ‘That’s got to be the worst route I’ve ever seen.’ Our city has a lot of crowned roads and drainage ditches for flood mitigation that really affects traffic flow and routing. That wasn’t programmed into his routing software. I could see that right away, because I know my town.”

Rob Scott, vice president of 247 Security, which specializes in school bus and pupil transportation solutions, agreed. “You want to get the answer in a way you understand it. There’s no reason in the world you shouldn’t say to a supplier, ‘Prove it. Demonstrate it to me in a real way. Show it to me in a way that meets my requirements.’”

Williams recalled joining the district 15 years ago as a substitute driver, when features varied from bus to bus, due to low-bid purchasing. His vehicle, he remembered, “looked like something out of Chitty Chitty Bang Bang, with all these knobs and buttons and stuff that looked like they were out of the 1950s.” He decided there had to be a better way.

As his career has advanced, he’s dedicated himself to closing the technology gap between cars and yellow buses, and finding cost-effective safety, management and comfort solutions. He said he feels fortunate to have a supervisor who listens to suggestions, and to be working for a district that is located near the Texas Transportation Institute, which is operated under the auspices of Texas A&M University.

“All of that means we’re already of that mindset of looking to the future,” said Williams. His district provides in-the-field feedback to video surveillance and fleet management solutions provider Seon.

That brings the topic full circle. “It’s a really good place to ask, ‘What do I want? What’s this system going to do for me?’” Scott questioned. “That answer varies from place to place. When you get those questions answered, you can start to match the technology to your requirement.”

Fleet managers should also place a greater emphasis on networkability, explained Scott, by selecting equipment with ports to allow connectivity to devices and functions they might not even be considering today. “It’s important to understand how your devices will interact with other technology,” he continued.

Scott noted that today’s buzzwords are different—1080p, 360-degree coverage and transfer capacity, to name a few—and they make the process of understanding a district’s needs all the more challenging.

“People understand resolution as it relates to television: 1080p is going to give you a better image than 720 pixels. But, then you have to talk storage, transfer capacity and speed, if you’re going wireless,” he said. “A 1080p file is two-and-a-half times bigger than 720. Now you’re going to chew up capacity much faster.”

Malcolm noted that it’s a delicate balancing act to set the best bit rates and optimize storage and playback quality. But, he noted, Seon has developed a multi-channel feature to “easily tilt the balance to favor playback quality or storage, while maintaining a usable file.”

The bigger-capacity question is pushing solid-state technology out the door, Scott and Malcolm agreed.

“(But) if you want to go to an industrial-grade solid-state drive (SSD), that solution gets fairly pricey as it gets bigger,” Scott cautioned.

Scott touts 247’s patent-pending dual-stage hybrid drive (DHD), which combines solid-state and hard drive, which eliminates the inherent weaknesses in both mediums. “Vibration and file corruption issues are effectively removed from the equation,” he said.

They also agree that 360-degree cameras are featuring wide fields of view, both horizontally and vertically, and frequently have the ability to replace two or more cameras.

Other issues to be aware of concern storage requirements for much larger files, the bandwidth required to move these bigger files, and time-saving techniques that need to be available when preparing a video to be used as evidence. But, 360 cameras are prone to distortion and lost details when certain dewarping technologies are used.

In fact, 360-degree cameras can deliver greater detail than even 12 months ago, he noted. “People are familiar with the fishbowl effect. When you have a very specific incident and you want to really see what is going on between the seats, you don’t want distortion,” Scott said. “We have that solution, where you can zoom in on a full-frame on the camera and then pan across it to get a very high-resolution image of a small space.”

He mentioned the compatibility of 247’s 1080p and 360-degree solution with 720p and IP cameras as another example of the sort of networkability that buyers need to consider.

Don Carter, director of transportation with the Port St. Lucie (Florida) Public School District, has seen technology come a long way since his days as a 16-year-old student bus driver in North Carolina. While the questions are often the same, who has the final word does have a big impact on outcomes, he said.

Some states set specifications that districts must follow and may even have responsibility for equipment purchases. Florida has a specifications committee that sets minimum standards and gives local districts leeway to add options.

“When it comes to the actual purchase process, I’m fortunate I make the decision without any interference in what I believe is the best interests of student safety and driver comfort,” Carter said. “Once I get a budget amount, I get however many buses I can get with the money I have.”

While Florida provides an extra level of care by requiring bus drivers to give hand signals to children when it’s safe to approach, that hasn’t eliminated the dangers of cars blowing through stop arms. Port St. Lucie is a testing ground for a camera-equipped radar system that is attached to existing stop arms that will sound a warning—inside and outside the bus—if an approaching vehicle isn’t likely to stop.

“We have it on 10 buses. Drivers like it. We’re providing feedback to Seon and the system is also providing information to them,” Carter said. “As they see something they want to tweak, they’ll come down on the weekend and do it.”

Rick Grisham, executive director of the Cobb County (Georgia) School District, is adamant that “no bus should operate without communication devices, digital video inside and outside the bus, and GPS.”

In his district, turn-key stop-arm enforcement exterior cameras have cut violations in half, with shared revenues reinvested in safety-sensitive initiatives, and front windshield cameras now track outside activity.

“We must, and will, do everything within our means to keep students safe,” he said.

Grisham’s team is currently reviewing the pros and cons of student RFID tags, on-bus tablets, systems with capabilities to go wireless with live video, social media software that provides real-time updates, plus apps that can tell parents where a particular bus is within a few miles. “We’re weighing convenience as well as safety,” he said.

In the end, Grisham advised, “No technology or program is paramount or can replace a well-trained and professional driver. … A lot of common sense with fiscal sustainability is key.”

Bullying has been a part of childhood (and adulthood) since the beginning of recorded human history and, likely, even before humans began documenting it....
Read more
Special Reports

When he analyzed recommendations from the Centers for Disease Control and Prevention (CDC) on social distancing and calculated how they would affect passenger capacity...
Read more
Special Reports

When it comes to introducing electric vehicles to school district fleets, Patrick Gervais wants decision-makers to know that the future is now, even with...
Read more