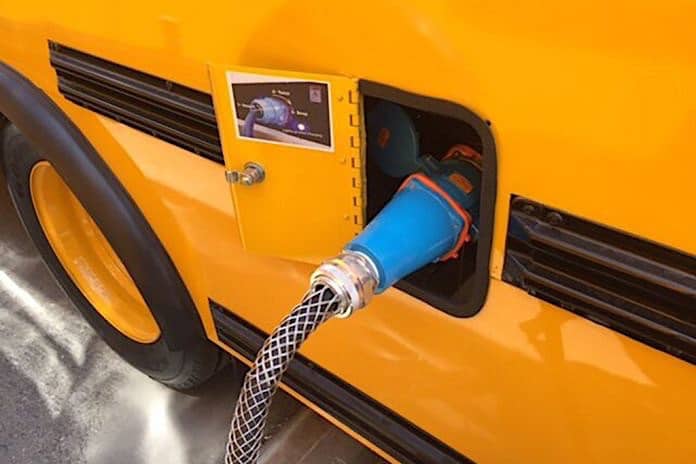 With the largest round of funds to date for electric school buses hitting districts, the topic of charging infrastructure and utility programs is top of mind.

Earlier this month, the American Transportation Research Institute (ATRI) released, “Charging Infrastructure Challenges for the U.S. Electric Vehicle Fleet,” which broke down three key infrastructure-related challenges that are expected to impact the electrification of the trucking industry, which is comprised of more than 12 million freight vehicles. The three challenges facing companies and operators, according to ATRI, are electricity supply and demand, electric vehicle production and truck charging requirements.

The ATRI research paper states supplying the required amount of energy to the trucking industry will require utilities to expand infrastructure to generate more electricity and transmit and distribute the electricity to locations where trucks will need to be charged.

Most relatable to school transportation, the ATRI paper discussed the challenges in infrastructure and how some states are more prepared than others.

“Some states are better equipped to implement electrification than others,” ATRI writes. “Since trucking operates across all states and in both rural and urban settings, the industry will need affordable and reliable access to electricity in myriad locations throughout the country.”

The paper states that according to the U.S. Energy Information Administration, there are nearly 3,000 electric utilities in the U.S. The research finds that with full electrification of today’s light-, medium – and heavy-duty vehicles in the U.S,. an additional 1,593.8 billion kWh of electricity would be needed, which represents an increase in annual U.S. consumption of 40.3 percent to power all vehicle truck types.

When unpacking what that means for the school busing industry, The World Resources Institute agreed that utilities will play a major role in preparing the electric grid for the new load that transportation electrification represents.

For instance, a map produced by the Clean Energy Works shows the number of electric school buses (ESBs) awarded to states across the country by the first rebate of the U.S. Environmental Protection Agency’s Clean School Bus Program. California and New York were heavily awarded programs, followed by Georgia, Illinois, Michigan, Texas and South Carolina. But a second map by Clean Energy Works shows the number of utility programs within states, with the largest current number being five. New York leads the way with the most utility programs, with California and then Michigan following suit. 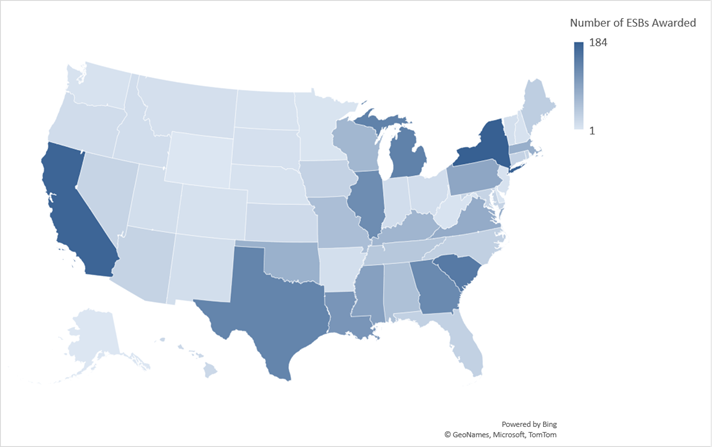 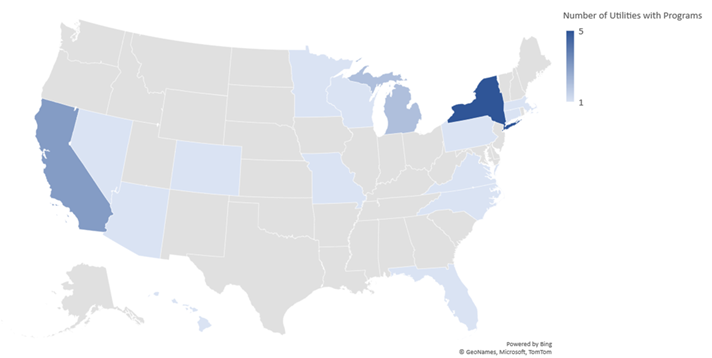 Because many of the electric vehicles were awarded to rural districts, as per the Clean School Bus Program prioritization application process, there is going to be a lot of demand for ESB connections in states with little to no utility programs.

“When pursuing school bus electrification, smaller school districts may need to give additional consideration to how their depot layouts might change by adding charging units,” commented Vishant Kothari, manager of school district technical assistance for WRI’s Electric School Bus Initiative. “In addition, smaller districts can be challenged by limited staff capacity. We have seen some transportation staff dealing with competing interests (driver shortages, etc.) and have limited capacity to take on new technology. Smaller districts in rural areas may also have fewer options available for infrastructure-related services, like nearby maintenance staff who are certified electricians with experience installing/maintaining electric vehicle supply equipment (EVSE) and working with high voltage; districts can take steps to address that in their planning/contracting.”

According to a press release, NYCSBUS, a nonprofit that was formed when the New York City Department of Education took over 1,000 school buses from now-defunct contractor Reliant Transportation, will leverage The Mobility House’s charge and energy management system, ChargePilot, to optimize infrastructure planning and operation for 30 electric school buses deployed at the Bronx’s Zerega Avenue depot. The program is expected to help NYCSBUS save $70,000 to $160,000 annually with managed smart charging.

New York was the first state to make zero-emissions school buses by 2035.

From WRI’s perspective, there will need to be various resources for the PowerGrid to support electric vehicles. “This will include substantial procurement of renewables and clean firm sources of energy, investments in infrastructure buildout and upgrades on both the transmission and distribution systems, deployment and integration of electric vehicles into distributed energy resources management and communications systems, establishment of rates that incentivize efficient consumption patterns, and programs to educate customers and support adoption,” said Michelle Levinson, manager of eMobility financial solutions for WRI’s Electric School Bus Initiative.

Levinson added that while the challenge is substantial, there are significant funds dedicated to grid upgrades in both the Bipartisan Infrastructure Law and the Infrastructure Reduction Act of 2022. “And there is momentum within the industry, such as GridWise Alliance’s February 2022 report on near-term, no-regrets grid investments to integrate EV charging,” Levinson added.

At this report, electric represented 1,181 school buses of the total 32,873 manufactured between Nov. 1, 2021 and Oct. 31, 2022. Though that number is expected to grow with the additional funding available from the CSBP and as more grant funds become available. The number was already up from 667 electric school buses reported the year before.

In July, WRI stated that school districts and fleet operators have committed to implementing 12, 275 ESBs across 38 states. A vast majority of the electric vehicles — 10,000—are tied to a contract announced at the end of December between bus dealer Midwest Transit Equipment and SEA Electric, a manufacturer of commercial electric vehicles converted from diesel, over the next five years.

The ATRI research continues, stating that there are four issues to infrastructure, starting with the U.S. electrical infrastructure is gaining while demand is set to increase. This includes hydroelectric, coal and nuclear power plants, which are oldest in age and yet offer steady power levels during peak and off-peak time periods. In addition to power plants, ATRI states that the distribution system used to deliver electricity is also aging.

The second issue is that electrical outages could half surface transportation. School Transportation News recently reported on summer heat waves and their potential impact on electric school buses.

The third infrastructure issue ATRI discusses is variable electricity rates, which could negatively impact the trucking industry, though this appears to be less of an issue for school busing as they could be charged during the middle of the day between runs.

The final issue is meeting state-level electric vehicle demand, which ATRI says may be difficult. The report notes that states would consume at minimum 25 percent more electricity as a result of full car and truck electrification nationwide. Seven states, including California, will see an increase in consumption larger than 50 percent.

While there are elements of the ATRI report that are unique to the trucking industry due to factors such as size, range required for trucking over long distances and the need for parking, Hamilton Steimer, research analyst for WRI’s Electric School Bus Initiative, said that some of the report’s points about challenges for full fleet electrification are relevant to school buses.

“Such as those regarding restrictions on charging times and costs to fleet owners,” Steimer said. “However, the cost, charging, and operating performance of battery electric trucks and electric school buses will continue to improve as the electric medium- and heavy-duty vehicle (MHDV) industry further develops.”