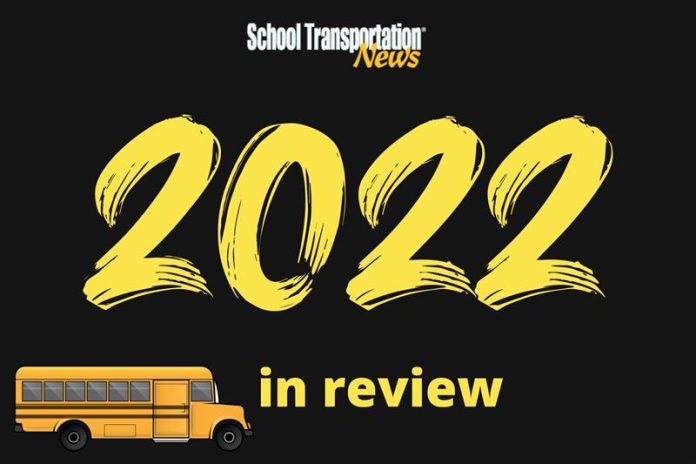 The school bus driver shortage and the COVID-19 pandemic were among the most popular STN magazine articles consumed by readers during 2022.

However, two out of the top 10 magazine articles, based on views reported via Google Analytics, reported on the importance and advancements of electric school buses, a topic that certainly flourished this year and a growing trend the editors expect will continue in years to come.

Our team is thankful for the hard-working professionals dedicating their time and appreciation to this industry.

The following news articles are ranked in order of popularity and indicate the month of publishing. 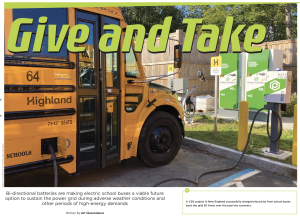 10. Give and Take (Published September 2022.)
Bi-directional batteries are making electric school buses a viable future option to sustain the power grid during adverse weather conditions and other periods of high-energy demands. The Texas power grid outages that were caused by the freezing temperatures of Winter Storm Uri in 2021 and the scorching temperatures of the searing heat wave this past summer are only a snapshot of a looming nationwide problem and an indication that school bus electrification may hold the lion’s share of a solution. While electric school buses are powered from the grid to vehicle, or G2V, the reciprocal answer to providing power back to the grid during times of emergencies and high demand is vehicle to grid, or V2G. 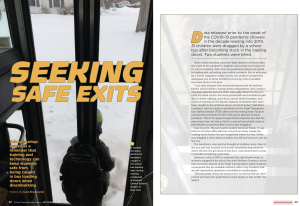 9. Seeking Safe Exits (Published September 2022.)
School startup serves as a reminder that training and technology can keep students safe from being caught in school bus loading doors when disembarking. While online learning kept students off buses for an extended period of time during the COVID-19 pandemic, students nationwide have resumed in-school learning. With that, comes the potential uptick in loading and unloading zone safety incidents at school bus stops. 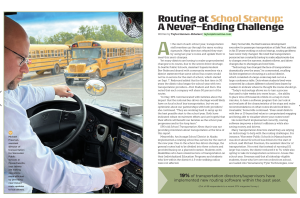 8. A Never-Ending Challenge (Published October 2022.)
Michael Freeman, assistant director of transportation for Worcester Public Schools in Massachusetts, said tablets are making operations more efficient by providing near-instant route updates to bus drivers. At the start of each school year, transportation staff members go through the same routing rigmarole. Yet, many districts were forced to make unprecedented changes to their routes, due to the severe driver shortage. Many transportation directors stated they were relying on technology to help with their routing challenges. For instance, Worcester Public Schools in Massachusetts was short about 62 bus drivers for the start of school, said Freeman. He noted that instead of running 101 large-bus routes, the district reduced the number to 74, while also opting to take its transportation service in house during the school year. 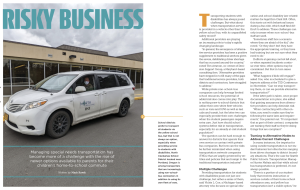 7. Risky Business (Published March 2022.)
Transporting students with disabilities always poses challenges. School districts prefer to transport all students via the yellow school bus, but that is not always an option, especially when providing service to students with disabilities. While private non-school bus companies can help leverage limited school resources, the potential of added risks also come into play. This is nothing new to school districts that utilize their own white fleet vehicles such as vans and SUV’s as well as taxi cabs and transit systems, but these non-yellow modes can especially provide their own set of challenges when the student passengers require extra care. 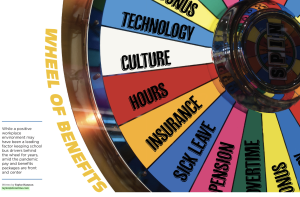 6. Wheel Of Benefits (Published March 2022.)
While a positive workplace environment was a leading factor in keeping school bus drivers behind the wheel for years, pay and benefits packages remain front and center concerns. When compared to the average minimum wage in the U.S. of $7.25 an hour, $19 an hour to drive a school bus does not sound at all that bad. But when compared with actual job duties of school bus drivers, and the fact that well-known restaurant food chains are willing to pay a starting wage of $21 an hour to combat labor shortages, it all comes into perspective of why hiring transportation employees is a challenge. College students provided a few recommendations that could be helpful. For instance, flexible schedules, growing their retirement fund before going into the workforce and a pure passion for the industry itself. In addition to increasing salaries, they also recommended to lower the minimum driving age to 18, along with better advertising of retirement plans and district training programs. 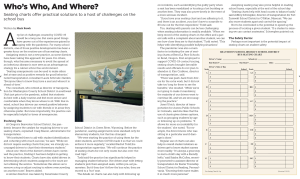 Seating charts offered practical solutions to a host of challenges on school buses. For many school districts, one of those positive developments was the greater focus on the routine use of bus seating charts. Assigning seats is not a new practice, as some districts had been taking this approach for years. For others, what became necessary to avoid the spread of an infectious disease is now seen as advantageous for a host of other reasons. 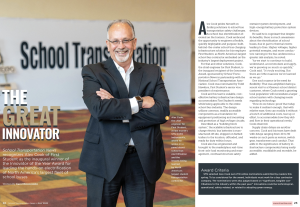 4. The Great Innovator (Published July 2022.)
School Transportation News recognized Alex Cook of First Student as the inaugural winner of the innovator of the Year Award for leading the hands-on electrification of North America’s largest fleet of school buses. As school bus electrification elevated on the horizon, Cook embraced the opportunity as the head engineer for the school bus contractor to implement a flexible, quickly deployable, purpose-built, and behind-the-meter school bus charging infrastructure solution. For that and other successes, Cook was named the inaugural recipient of the Innovator Award, sponsored by School Transportation News in partnership with the National School Association. 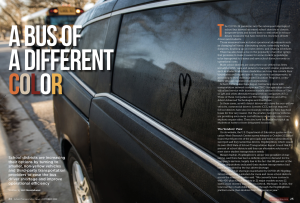 3. A Bus Of A Different Color ( Published October 2022.)
School Districts are increasing their options by turning to smaller, non-yellow vehicles and third-party transportation providers to ease the bus driver shortage and improve operational efficiency. The COVID-19 pandemic and the subsequent shortage of school bus drivers forced school districts to seek relief in extraordinary measures that tested the resilience of their staff, drivers and students. Those measures included operational adjustments such as changing school bell times, eliminating routes, extending walking distances, doubling up on routes driven, and rotating schedules. More school districts are using their non-yellow bus fleets including SUV’S, vans and sedans to transport smaller populations such as students who have disabilities and may live outside their boundaries and require special transportation arrangements, as according to their Individualized Education Programs, or students who are experiencing homelessness. 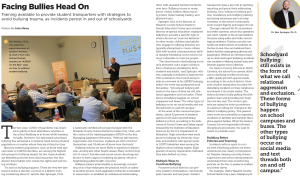 2. Facing Bullies Head On (Published March 2022.)
Two years of the COVID-19 pandemic resulted in a patchy school attendance, whether it was virtually or in the school building. However, bullying remained a consistent trend among students no matter where they were sitting in class. Minority student populations, such as those with special needs or LGBTQ+ identities, are among the highest risk groups for bullying targets. By law, these students are federally protected from discrimination, but that does not deter bullies who violate the rights and well-being of others. Special training developed for special education classes on how to address student bullying is now also being used on school buses. 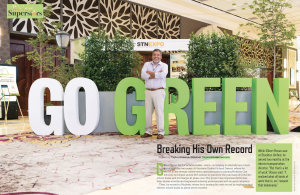 1. Breaking His Own Record + Rising Superstars Profiles (Published October 2022.)
Gilbert Blue Feather Rosas did the unfathomable in helping to electrify two school districts within two years. At California Stockton Unified School District, where he served as the energy conservation specialist prior to joining Modesto City Schools, he helped secure $8.3 million in grants for the purchase of 11 electric school buses and 24 charges in phase one. The project was implemented in less than eleven months and impressed industry professionals with its quick adoption. Then, at Modesto, he is beating his own record by implementing electric school buses in about seven months.