Indiana had its small-town fictitious basketball team in the movie “Hoosiers.” Minnesota had the Disney movie “The Mighty Ducks,” about a rag-tag youth hockey team. But Richmond, Virginia’s team is not fictious: the all-real St. Bridget Catholic School robotics team known as “Team Clueless.”

The school located in Richmond, Virginia, has two middle-school robotics teams. They compete in the FIRST LEGO League of the FIRST Robotics program. Each year, participating students on the team compete by building a robot exclusively out of LEGOs programmed with different sensors to complete various missions on a standardized board provided to all competing schools.

However, there’s another part of the competition that represents one third of the possible points. The middle-school team pursued the Innovation Project, which calls for students to be involved in something within their community, by finding a problem and coming up with an innovative solution. In so doing teams are judged on teamwork and impact of their innovation and the creativity of their solutions.

St. Bridget competed in 2021 for FIRST LEGO League with the innovation theme “cargo connect.” It presented an opportunity to resolve a prevailing problem with last-mile parcel delivery in supply chains by using school buses when they aren’t serving students during a normal workday.

“The big open-ended problem they’d solve was improving the transportation of products,” explained Eric De Boer, the school’s instructional technology specialist and one of the FIRST LEGO team coaches there. “One of our teams was focused on package delivery and porch pirates, so they came up with a [do-it-yourself] DIY package protector for the people’s front porch. The other team had the idea of using school buses to deliver packages for Amazon because the kids are delivered in the morning and the afternoon, but what are those buses doing middle of the day? We didn’t know. So, we looked into it. The programming encourages you to talk to experts in the field, so we reached out to one of the local public-school divisions, [and] talked to their director of transportation.”

The young minds contemplated the routine of school bus drivers and their role in student transportation and questioned what the drivers themselves do in the middle of the day. The bus drivers are part-time at St. Bridget, like at many schools, and often work three hours in the morning and/or two hours in the afternoon, and then they’re done. Some drivers take the bus home with them, while some of them leave it at the school’s bus lot.

To better wrap their arms around driver and bus availability, the team designed a survey to obtain data on how interested school bus drivers might be to earn extra wages by putting in more hours driving a bus to deliver cargo or parcels when they’re not transporting students. The students engaged Henrico County Public Schools, which agreed to participate.

The students learned that 66 percent of Henrico County bus drivers said they would work more hours if they could get paid extra to deliver packages. The survey also showed that a lot of extra work of driving field trips and sporting events had been curtailed during COVID-19. 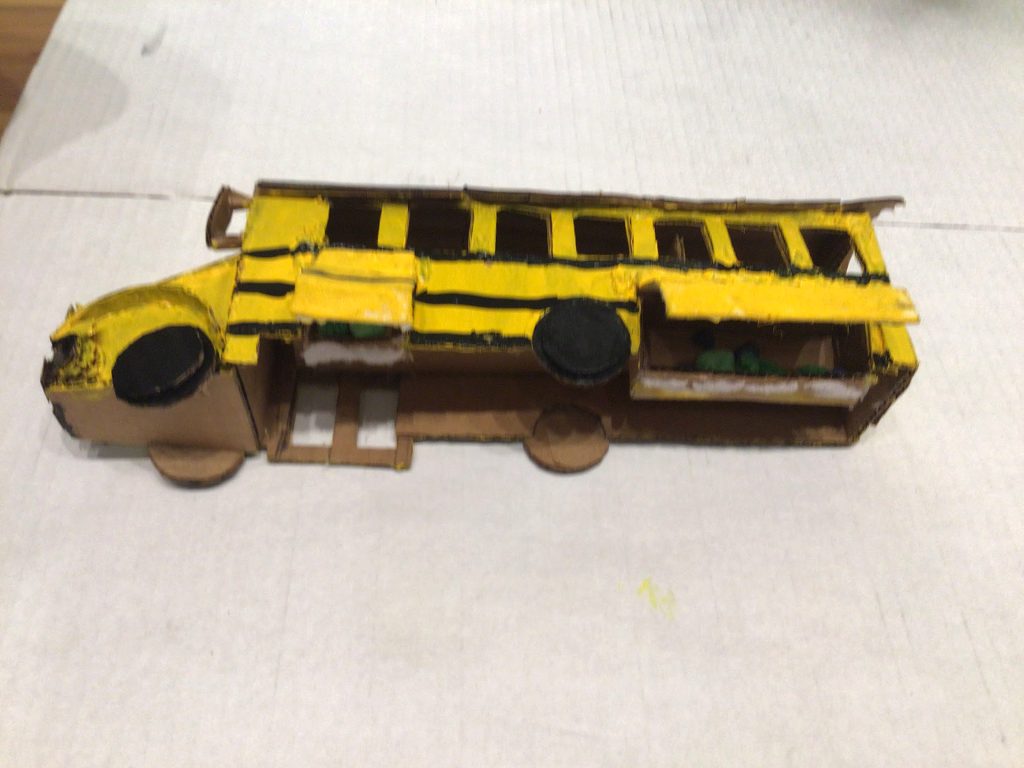 Could a School Bus Actually Be Used to Transport Goods?

A turning point was an interview the students conducted with a manager at Amazon Fresh delivery in Seattle. Halfway through the conversation, she said, “Well, are you guys actually trying to do this?” They said they were considering it and suggested they first find out if it was legal in their state.

After consulting a lawyer at a local law firm, who looked up the Virginia law, they informed them that it’s not legal to use school buses for anything but to transport students and the elderly in Virginia.
A bit discouraged, the team then asked, “How do you change the law for that?” That’s when they reached out to state legislators and connected with Sen. Siobhan Dunnavant of Henrico County, near the Richmond school district. By this point, the robotics team had advanced to the national championships, the only team from Virginia to do so, and won. A world championship was in their site as one of 108 out of 24,000 teams globally. This caught the attention of Sen. Dunnavant, and the wheels, figuratively, continued to spin.

The middle school team, Team Clueless, created a device called a “Bus Box.” It could be installed on the undercarriage of buses to transport packages and generate revenue in doing so. The bus box, however, wasn’t essential, and the concept could be used without any retrofit to merely transport packages that would rest on the floor or seats if necessary. But first, the students had to navigate through a thick path of legislative requirements if their idea was to ever move forward.

How To You Overcome Legislative Gridlock? Leave it to Middle Schoolers

While the team fell short of winning the world championship, Sen. Dunnavant hosted the students at her legislative office to congratulate them on their accomplishment, which included winning the Rising All-Stars Award, which is similar to the MLB Rookie of the Year award. The visit sparked a conversation about the idea for the innovation project and the obstacle of thestate law from inhibiting them from moving forward. The legislative session is normally held in January and remains open for about two months.

Unfortunately, the team missed its window for Sen. Dunnavant to propose a bill. Getting a bill to go through subcommittee and then committee usually requires time for debate by committee members and changes before going forward for vote. However, Sen. Dunnavant had another idea.

Bills can be pushed through the legislature if they have unanimous consent in both the House and the Senate. “You’re too late for our general assembly session this year unless I can get unanimous consent [it could still move forward in this session],” Sen. Dunnavant, said. “And, you know what, I bet I can do it. I’ll propose your bill. It’s very late, so it probably won’t go through, but we’ll see what they say.”
She proposed the bill at one of the last legislative sessions to go to committee. Without any opposition, the bill moved to committee.

By unanimous consent, the proposed bill went to the education subcommittee.

“From day one, I have focused on providing Virginia’s students with a best-in-class education,” Gov. Youngkin said. “The ‘bus box’ is a perfect example of what’s possible when we foster innovation, provide the necessary educational resources, and encourage our students to excel.”

DeBoer recalled that the final vote may have been 96-3, 96-4 in favor of the bill. . “We found out about that before we went to the world competition,” he said. “But then, the bill became law July 1 in Virginia, and they had a ceremonial bill signing and invited the team out, had a public-school bus there to complete the picture.”

Sen. Dunnavant added, “I have been so humbled to learn from the St. Bridget Middle School Robotics team, Clueless Robotics. They have demonstrated the fearless pursuit of the possible,” she continued. “As a new robotics team, they won the state championship and were awarded at The World Robotics Competition. They also imagined a practical solution to help with the transportation of goods, tested it and then persuaded support for a legislative solution. They have learned the life skills of teamwork, imagination and persistence can make anything possible.”