Electric utilities across the U.S. are poised to be a key part of the electric school bus transition. In a variety of locations across the country, they are currently exploring how electric school buses can function as giant rolling batteries to support the power grid, enabling greater renewable electricity generation, and providing disaster relief through the use of vehicle-to-grid (V2G) technologies.

As shown in the map below, at least 15 utilities across 14 states have committed to pilot electric school bus V2G programs, which allows electricity to be stored in the bus batteries and later discharged onto the grid. The batteries’ stored power can help stabilize fluctuating energy conditions, alleviate the need to start up additional power generation sources by shaving peak energy needs, and provide mobile emergency power to shelters and other essential facilities. Because school buses operate on set daily schedules and often sit idle in the summer and during portions of the school day when electricity demand is high, they are ideal for this purpose. The power they can provide to the grid or buildings could offer benefits to help offset electric bus costs, a win-win for schools and the electric utility or other entity using the electricity. 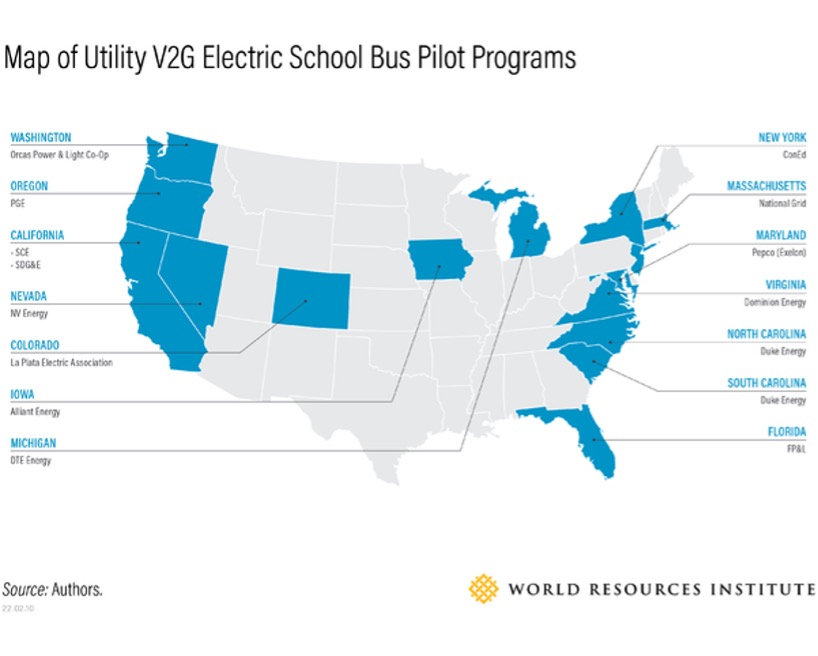 While many of the V2G pilot programs are not expected to have results for another year or more, two earlier programs shed light on how the plan can work. In 2021, electric utility National Grid successfully delivered power from one electric school bus back to the grid for more than 50 hours over the course of the summer using V2G technology during peak demand times. By using V2G when demand for electricity was at its highest and most expensive, the electric school bus helped reduce local emissions in Beverly, Massachusetts, and decreased the need to use less efficient fossil fuel “peaker” generators.

Last year, electric utility Con Edison also successfully completed one of the first V2G pilot programs, testing the charging and discharging of a fleet of five school buses in partnership with White Plains School District in New York state, bus manufacturer Lion Electric, infrastructure company Nuvve and bus contractor National Express. Con Edison was able to successfully accept energy from the electric school buses in White Plains back into the grid, and that energy was distributed to their customers.

The following considerations for the design of future projects that test V2G technology with electric school buses are based on an in-depth review of the pilot projects in all 14 states.

1.  Does the Program Prioritize an Equity-First Approach when Selecting Partners and Locations?

Electric school buses with V2G technologies offer an opportunity to advance an equity-driven agenda given the air quality, health and resiliency benefits that may be amplified in underserved communities where residents face higher levels of pollution and are more susceptible to climate change impacts. Several proposed or deployed V2G electric utility programs have focused on underserved communities, identified through indicators such as the number of students eligible for free and reduced lunches or average family income. For example, the goal of a project funded by the Portland Clean Energy Fund, is to use V2G technology to create an electric school bus-based resiliency hub in a low-income community in Portland. There is a crucial need for electric utilities to continue to enhance their efforts to integrate additional equity-related indicators — such as race, and exposure to air pollution — in program design to ensure projects directly benefit underserved communities. This can be done throughout the program design and implementation process, from thoughtful criteria for school district partner selection, to expedient interconnection application processing and providing technical assistance for under-resourced school districts. In turn, these students and others in the community gain access to cleaner transportation and associated air quality benefits.

Using electricity for powering buses typically results in significant cost savings compared to relying on diesel fuels. However, specific electricity rate designs, which can vary widely across the U.S., influence the economics of electric school buses and can be particularly important if using V2G applications. Electricity rate structures can influence when buses are charged or when it makes sense to discharge electricity.

In some cases, districts may face higher costs for charging during peak usage periods. Or they may face higher demand charges if their overall power usage increases during a specific hour (or, sometimes, a 15-minute interval) during a month. Significant cost increases can be incurred if demand charges are increased. For these reasons, new rate structures may be needed to enable school districts to utilize electric school buses and to provide energy through V2G programs. Pilot programs can be used to better understand the timing and volume of electricity used by electric school buses and how to best structure rates to enable both school bus electrification and V2G applications.

Electric school buses could play a role in disaster recovery and response by providing electricity during hurricanes, fires, floods and other emergencies. With climate change, natural disasters are becoming more frequent and more intense. By 2030, floods will affect more than 145 million people, including many who live in coastal areas of the U.S. During extreme weather and other emergencies, interconnected infrastructure systems can fail due to power outages that stop core community operations and expose the most vulnerable residents to disproportionately high risk.

With proper planning and infrastructure, electric school buses could provide power to buildings that are often used as shelters or offer power to other equipment, such as cell phones, during power outages. Investing in resilient infrastructure and solutions today will be necessary to provide life-saving emergency back-up power, as these events become more common.

Now is the time for electric utilities, manufacturers, policymakers and other stakeholders to work together to deploy electric school buses nationwide and prioritize underserved communities. V2G programs can be an important part of the transition and offer value to both the community and the grid overall.

School Transportation News edited this article originally published by WRI’s Electric School Bus Initiative for style and space and republished it with permission.

Greggory (“Gregg”) Kresge is a senior manager of Utility Engagement and Transportation Electrification for WRI, focusing on school bus electrification and vehicle-to-grid (V2G) integration. Prior to joining WRI, Gregg was the electrification of transportation-project delivery manager for Hawaiian Electric servicing the islands of Hawaii, Maui, Lanai, Moloka`i and Oahu. In various capacities over a span of 12 years, he worked in two separate island utilities. Gregg was also the co-chair of the Smart Electric Power Alliance (SEPA) EV Working Group. He is an EV owner since 2013 and lives in a condominium with no access to dedicated charging and is looking forward to increased public charging options.