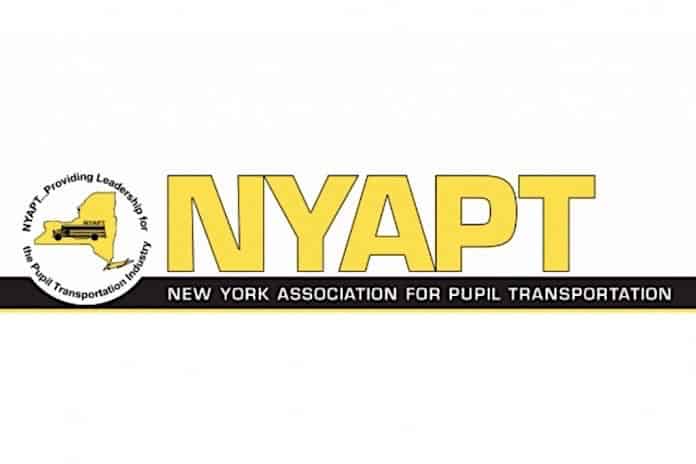 The New York Association for Pupil Transportation celebrated the passage of legislation that will increase and enhance random testing of school bus drivers for the presence of drugs or alcohol. Specifically, NYAPT announced that the legislature has passed S.2587E/A.208E, sponsored by Senator Carl Marcellino (R-Syosset) and Assembly Member Donna Lupardo (D-Binghamton).

Current federal and state laws require that school bus drivers be subject to “random” testing for drugs and alcohol in accordance with rigidly-regulated testing procedures. The association, however, has noted technical issues with the testing regimen and seeks to enhance it for school bus drivers in New York state.

The bill, as passed, would: (1) Require that all drivers employed by an operator, including school bus drivers who drive smaller buses and are exempted under federal law, be included in the sample pool for random tests; and (2) Increase from 6 to 8 hours the period beyond which an individual can consume alcohol prior to driving the school bus.

These measures were originally advocated by NYAPT, among other school bus safety organizations, following numerous instances of school bus drivers being apprehended for driving under the influence of alcohol. The association met with the sponsors to urge the introduction of legislation to close the gaps in testing and to make the rules more stringent for school bus drivers. To their credit, they saw the value of the proposed actions and have worked hard since that first introduction to get the legislation passed.

The association sees this legislation as helping to assure parents that their children are in safe hands at all times. The tests would also be reassuring for the drivers who can go out on their daily routes knowing that they are not compromising the safety of the children they have on their school buses.

Senator Marcellino shared that: “It is time we closed this loophole based on bus size. This bill goes beyond placing the DWI laws on all school bus drivers. It allows schools to do pre-employment drug and alcohol use testing. These are steps we need to be taking to ensure all of our children safely make it to and from school.”

Assembly Member Lupardo noted that: “It was surprising to learn bus drivers of smaller school buses were not subject to random testing for drugs and alcohol. By closing this loophole our roads will be safer for everyone, but most importantly for the students who ride the bus to and from school every day. I’m glad we were able to get this legislation passed through both houses of the Legislature and look forward to it being signed by the Governor.”

“School bus drivers do amazing work to keep our children safe each and every day of the school year. We trust them with our children and day after day, they earn that trust,” stated Lori-Ann Savino, President of the New York Association for Pupil Transportation, and Transportation Supervisor for the Jericho School District on Long Island. “This legislation helps us and helps them ensure all the Moms and Dads that our children continue to be on the safest ride to school.”

NYAPT Executive Director Peter Mannella, noted that “this legislation originated with the school bus industry as we looked for ways to manage our internal controls and procedures more rigorously—even those mandated by the federal government. We should not have to explain to the parents and the public why a bus driver had been given the keys to drive a school bus in a compromised condition. That should never happen. We applaud Senator Carl Marcellino and Assembly Member Donna Lupardo for their introduction and advancement of this important legislation and we urge Governor Cuomo to sign it into law!”

Click here for a copy of the Association’s Memorandum in Support of the Legislation.