A school bus without its tires, fuel, oil and other hazardous liquids, was submerged into the Gulf Shores at Saunder’s Yachtworks in Alabama, to give first responders unique, hands-on, real-world emergency evacuation training. 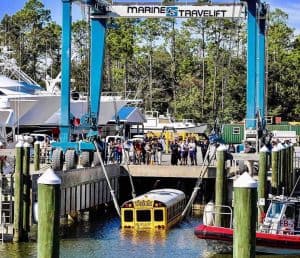 The Oct. 24 training was produced by Baldwin County Schools, along with the Orange Beach Fire Department. Organizers said the training is the first of its kind to be conducted nationwide, and involved the assistance of several different local agencies and fire departments.

“We learned that we have more to learn,” said Kevin Lanford, assistant chief of training for Orange Beach Fire Department. “Our divers got some experience, but we recognize that this is only a beginning and that we will have to do additional training in the future.”

Orange Beach, a popular tourist destination, is located on Alabama’s Gulf Coast and borders Perdido Pass, Wolf Bay, Intercoastal Canal and Mobile Bay. School buses take main roads that travel along the canal, and Pollard said there is a significant possibility that a bus could fall into the water.

The idea originated from Glenn Brown, fleet manager for Baldwin County Schools, as well as a fireman and paramedic with the Orange Beach Fire Department. Brown was doing training with first responders and identified an area that needed to be addressed.

“First responders had no prior training in school bus evacuations in any scenarios,” said Anthony Pollard, transportation director for Baldwin County Schools. “[Brown] took it upon himself to invite fire departments and first responders, have them come in and do training on the technical aspects of school buses. This included police departments knowing where hydraulics might be located, and fire departments, where emergency exits are located and how large are the exits.”

It was the Orange Beach Fire Department that suggested placing a school bus into the water. Baldwin County Schools donated the bus, and almost a year of training and planning led to the event.

“With the potential hazards, it was an ideal scenario that needed to be added to the training we do with first responders and eventually our own bus drivers,” he added.

Prior to the bus being lowered into the water, Brown held classes to bridge the many communication and code-word gaps between the different agencies that were involved. 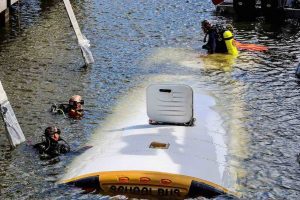 The bus was lowered into the water using a boat lift, which allowed the teams to control how the bus was positioned. It was also suspended throughout the day, to avoid moving. Lanford said the trainers concluded at the end of the event that a bus would most likely overturn on one side.

Unforeseen consequences resulted from the bus being lowered into the water. One was that the water level was lower than trainers anticipated. Pollard said the removal of the bus tires allowed for the bus to sink lower and faster.

Another result, said Pollard, was that the increased water pressure didn’t allow the emergency roof hatches or the rear exit door to open.

Lanford said he noticed further complications once the dive team entered the water.

“The inside of a school bus is very crowded and confined; the number of and positioning of the seats had a big impact on our divers’ ability to move,” said Lanford. “Plus, the need to search under and between each seat added to the work load and the stress load.”

The school bus was stocked with dummies to represent student passengers. Low visibility also complicated the dive. In an emergency situation, especially under water, first responders must ensure the bus isn’t going to shift or move, and that there are no other hazards that can negatively affect student evacuation and rescue, said Pollard.

“The drill was extremely risky,” he explained. “We learned as a department that divers cannot just enter a bus. They must first make sure the bus is safe to enter. When entering the bus, the visibility for the divers was less than six inches. The bus seats and emergency exits were hazards for the divers as well, because their dive equipment could have easily been compromised. Furthermore, imagine entering the murky bus as a diver and having back packs, student bodies, and many other obstacles hindering the rescue efforts.”

Future training events will be developed to encounter more emergency situations, Lanford said, adding that they will require multiple agencies, as training turns from rescue to recovery.

“One of the biggest take-always is that no one would want to have a lunch box that floated out the bus, turn up 10 days later and little Johnny had lost his life,” said Pollard. “No one wants to see body bags being pulled up from the water. When the first responders pulled up the dummy that weighed more than 150 pounds, it was a heart-breaking [sight]. This training is going to help all agencies respond so much quicker, now that they all have ideas as [to] how a bus fills with water.”

The teams involved said they learned a lot through this exercise, and will have more ways to expand and enhance the training, including for students.