Tim Purvis has nearly seen it all when it comes to school transportation operations in the Golden State.

Purvis was a struggling college student when he discovered the school transportation industry in 1984. He was working on his undergraduate degree in world history from California State University at Fullerton, with a career goal of teaching high school students, when a friend recommended he become a school bus driver.

Purvis recalled he was “broke, hungry, and had to pay for college,” so driving a school bus was a great job opportunity. He said he was able to take children on field trips with his textbook in hand, to read while he waited, of course.

“During the Los Angeles Olympics [the summer of 1984], they were short on drivers so badly, they hired me within a day, I think, and trained me and by that September,” Purvis said. “I was driving high school kids and some elementary.”

His first job at Fullerton Joint Union School District (FJUHSD) gave him plenty of study time as he waited for the kids on field trips, and he was able to work his school schedule around his driving hours.

Purvis explained, that he had a very supportive boss at the time, Jerry Hart, who pushed him toward his full potential. As Purvis was beginning to study for his master’s degree in American studies, he reevaluated his career goals. Hart, then-superintendent Dr. Ken Jones, and Chief Business Officer Tom Godley wanted Purvis to recognize his potential for managing the business side of operations.

He said they advised him to become a state-certified school bus driver instructor. “I have to tell you, I laughed,” Purvis shared. “I thought, this is not what I wanted to do.”

However, Purvis complied and went to the state capital in Sacramento in 1987 for the training. Within three weeks, he became a fully credentialed California school bus driver trainer. That June, a week before he completed the training, he married high-school sweetheart Diane. Purvis refers to her as his number one business partner who is always by his side.

He then spent the next year as an operation supervisor and a trainer for the Fullerton district. However, he said Hart continued to push to him. Hart required Purvis to obtain experience in every aspect of school transportation, including overseeing the school bus mechanics.

In 1989, a new position opened up as the assistant director of transportation for Poway Unified School District in San Diego County. Purvis said there was little room for growth at Fullerton, as his transportation director Hart, still had many years before retirement.

However, Purvis said he and Diane had just bought a house in Ontario, California, and they weren’t sold on the idea of moving almost a hundred miles south.

Hart and Godley, however sat him down one day and told him to apply for the position. Purvis said they continued to push him out of his comfort zone. Poway soon hired him.

Purvis discussed quite a few operational changes that have impacted him throughout his career, including funding and the changing qualifications to be a transportation director.

In 1991, a California Supreme Court ruling between Poway, Murrieta Unified School District and Oxnard Unified School District changed the way school districts ran their operations. The ruling stated that said school districts no longer were required to transport general education students, and transportation was only required per state law to transport students with a disability, as required by their individualized education program.

“It’s appropriate for Poway to do what we can do under the auspices that the California Department of Education code states that general education transportation is not mandated,” Purvis said.

“I like the fiscal side of it. You usually have a lot of buried costs in there for things that aren’t going to go away, such as field trips. If you shut down general education transportation and you sell off your general education large bus fleet, your field trip costs are buried in those, and that expense doesn’t go away,” Purvis explained. “Because you’re now going to have to contract for that and pay minimums for trips, and all these things you wouldn’t have to do if you’re augmenting your driving force.”

However, he said, charging for transportation never crossed his mind back when he joined the industry in 1984. 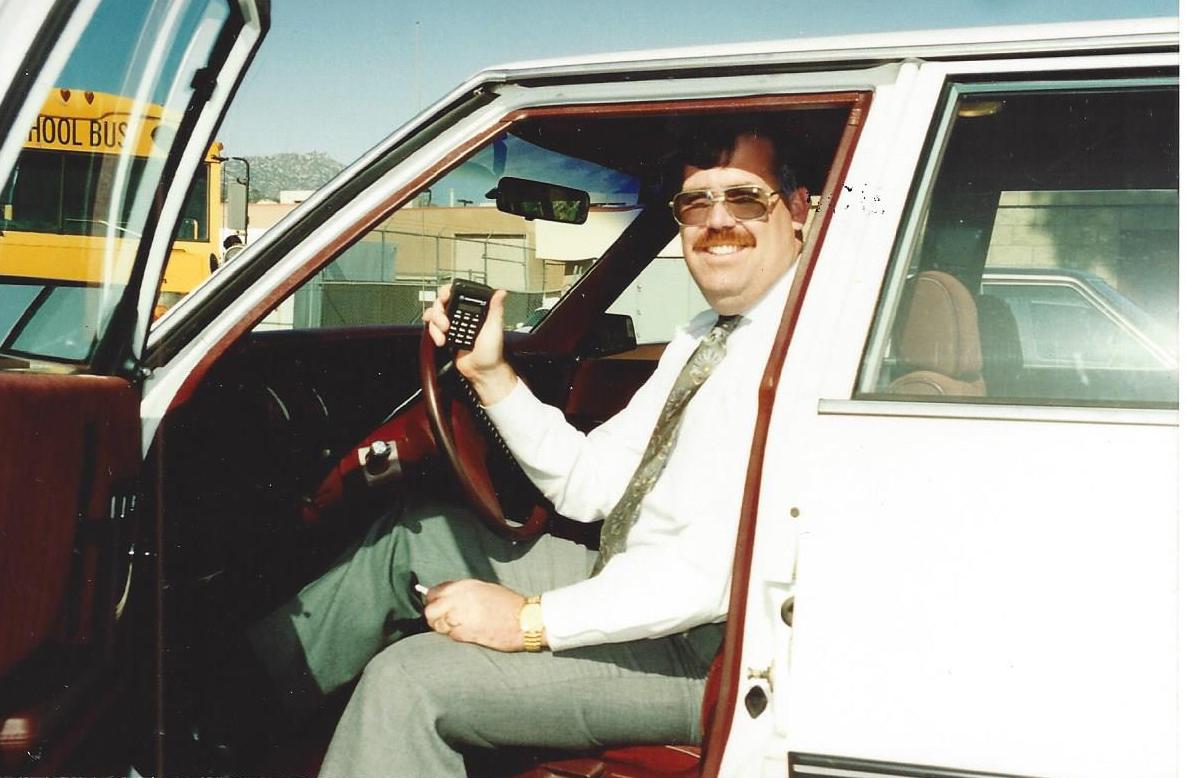 Another large change in California occurred in 1992, when the state of California saw its first school district essentially go bankrupt. However, because a school district can’t shut its doors, Purvis said the California Department of Education and Department of Finance stepped in. The state created an independent oversight body, the Fiscal Crisis & Management Assistance Team (FCMAT), which is responsible for sending in “study teams” to help school district departments such as pupil transportation, food and nutrition and risk management.

Purvis started doing consulting work for FCMAT in 1994 with colleague Mike Ray. Purvis said it was this experience, along with performing independent consulting for School Services in California, that encouraged him to start his consulting company Pupil Transportation Information (PTI) in 2012.

He said he helps transportation directors be familiar with laws and regulations, especially in reference to making financial decisions. Through PTI, Purvis performs comprehensive reviews of all aspects of transportation department operations and provides recommendations and additional management assistance, including leadership training and onsite evaluations.

“Like other consulting agencies, with transportation, we can go in and help them with the recommendations,” Purvis said. “We can guide [districts] with whatever the request is. I do that on vacation time, on weekends and at night.”

Another aspect that has changed throughout the industry, is the change in qualifications of what it takes to be in an administrative transportation position. Purvis explained that 25 years ago, getting into the transportation business didn’t require someone to have all the technical experience that is needed today.

Purvis explained that many transportation directors start as bus drivers and work their way up the ranks. But he noted that along the way, they have usually had a mentor to help them. Meanwhile, many directors didn’t receive formal educations on transportation logistics or have previous experience with providing fiscal oversight or supervising vehicle maintenance.

“But yet, they’re managing one of the most challenging areas of the classified contract, and that’s part-time services with more additional time and overtime, and that is school bus drivers,” Purvis explained.

Now, he added, transportation directors need to be more invested in their operations and understand how to articulate fiscal budgets to be able to advocate for the departments’ needs.

He noted that many people in the industry believe school bus drivers are the biggest need in a transportation department. However, Purvis disagrees.

“I will tell you that among if not the largest problem, is the recruitment and retention of good, strong, well-trained people [in the industry] — transportation leaders,” Purvis explained.

Purvis said he loves technology and has benefited from it as well as gravitated to it over the years. He said technology helps departments better streamline operations.

“Don’t go out and buy all the bells and whistles to say I have GPS,” Purvis continued. “And then you turn around and can’t explain how you’re applying GPS on buses, how it’s helping you. You need to be astute.”He explained, that even districts with as few as 15 routes can utilize the capabilities of routing software. He advised, however, that installing the technology isn’t enough. He recommended that a director needs to understand its functionality and the ways it is improving operational efficiency.

Tim Purvis is also currently the chairperson for the National Writing Committee on Technology for the National Congress on School Transportation, which was scheduled to be held in Des Moines, Iowa in May. However, the coronavirus outbreak forced the conference to be rescheduled tentatively for May 16-19, 2021. More information is available at stonline.com/go/6w.

One technology solution that Purvis said he believes has really changed the industry is a parent- facing app that provides real-time information on the location of school buses. He said regardless if the district serves a rich or economically struggling community, he said there are expectations to providing instant communication.

“If you don’t have a parent app out there and you’re not being fully transparent, I would ask you, what are you hiding?” Purvis questioned.

Especially because parents in Poway have to pay for transportation services, he said they should be able to open up their phones and pull data on when the school bus will arrive.

Accomplishments Over the Years

Purvis has had a very full 36-year career in school transportation, and he said he doesn’t plan on leaving the industry anytime soon. Besides winning several awards from the state of California and serving as president on the California Association of School Transportation Officials (CASTO) Chapter #3 for San Diego, one of his accomplishments was teaching the first Tesla Transportation Leadership Academy, provided by the California Association of School Business Officials. The class is designed for those who are in transportation management or leadership roles as well as those who are aspiring to be in those roles. Purvis graduated 41 students last December.

His district also received an award through the San Diego Air Pollution Control for having one of the largest alternative fuel bus fleets in the area. Purvis explained that he has the responsibility to make decisions based on taxpayer money, which is what drove the district’s cleaner air initiative.

His fleet of 152 school buses consists of 18 percent compressed natural gas, 2 percent gasoline, and 80 percent cleaner diesel. He added that he is the process of receiving five additional electric school buses.

As far as industry accomplishments, Purvis said he has seen a lot of changes throughout his years to continue to make the school bus the safest form of transportation for students. He said the implementation of lap/shoulder seatbelts, LED lighting, driver training, wheelchair securement regulations, and even higher seatbacks, have all played a role in improving safety.

When asked what has kept him in the industry, Purvis, who is normally of a man of many words stopped short. “I think I get to work, with not only some of the smartest people I know, but they also hold a passion, a lifetime of dedication, [to school transportation.]”

He added his passion is serving as a teacher and a mentor to other professionals in the industry, due in part to the people who mentored and pushed him from a young age.