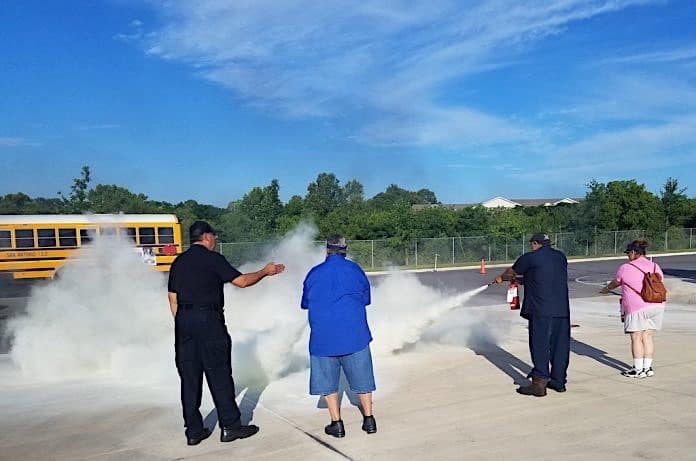 At San Antonio ISD, an interactive, engaging safety training for the transportation staff has the whole department in high spirits and ready to take on the new school year.

The Transportation Safety Training Extravaganza consisted of one day of classroom instruction followed by a day of hands-on training. Nathan Graf, SAISD’s general manager of transportation, first started the program during his second year at Houston ISD, and ran it there for six years. This June, he brought it to SAISD for the first time. The verdict? Everyone “loved it,” he said.

Graf estimated 350 drivers, aides and technicians attended the training, which was put together by 14 driver/trainers with much “teamwork, care and attention to detail.” SAISD partnered with the Crisis Prevention Institute, American Red Cross, Operation Lifesaver and San Antonio Fire Department, all of whom were in attendance to guide exercises.

“It’s really neat because the drivers then have the ability to get out of the classroom. It’s not your typical PowerPoint, they actually get to get out and put their hands on something.” Graf told STN.

The response from his transportation staff was overwhelmingly positive, said Graf. “They had the time of their lives,” he told STN. One mechanic even requested to teach a class next year on general bus maintenance.

Just before school started, the department completed the rest of their training, which Graf said included wheelchair training, bus evacuation, E-Z-On vests, integrated car seats and student management. “One of our activities involved playing “Family Feud” with the questions and answers being related to bus safety. The drivers and monitors were really engaged in this activity.” Graf noted.

This week, SAISD kicked off the school year with a district-wide convocation for all 9000 employees. There, the transportation staff received the Spirit Stick Award that traditionally goes to the attendee who shows the most spirit at the gathering, marking the first time that the award has gone to a department.

“Everyone is just on cloud nine in our department,” Graf enthused. “Morale is as high as I’ve ever seen it.”