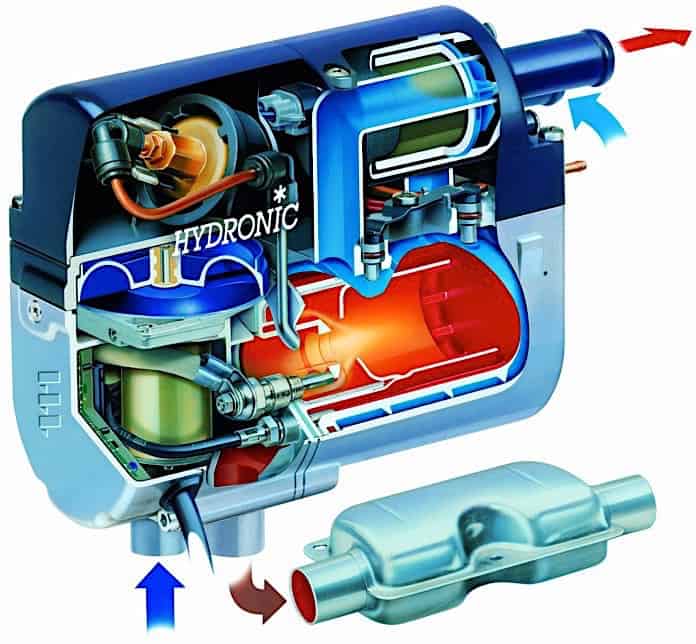 School districts in some of the colder states are beginning to see a two-fold benefit to installing engine heaters on their buses. Not only do they get the buses warmed up for drivers on cold mornings, but they are decreasing idle time and, in the end, cutting emissions.

“Given the increased efficiency of the new diesel engines as well as the increasing requirements and regulations to minimize engine idling; the need for additional heat has grown,” said John Dennehy, V.P. of marketing and communications for Espar Products.

By adding timers to the device to set a pre-heat start-up time, cold-smoke and pollutants that are the by-products of a cold engine are reduced.

In an effort to highlight some of the emission issues concerning school buses, DetroitABC affiliate Channel 7 sent out a news crew to the Bloomfield Hills School District high school to do a story on the black smoke related to start-ups.

“They couldn’t do the story because our buses don’t smoke,” said Rich Hella, head mechanic for the district. “The parents have noticed that the buses don’t smoke as much because the heaters keep the engines warm.”

The addition of engine heaters has also cut down on costs for the district. It has extended the life of the engine starters, the alternator and the batteries because they don’t have to work as hard.

“It’s cut down on overtime also. Our mechanics would have to come in at four or five in the morning to get the buses started by jumping them or using starter fluid,” added Hella.

Promoting engine heaters as idle-reducers is a recent change for some companies.

“We’ve started to promote our product as an anti-idling product instead of an engine heater about 24 months ago,” said Paul Baczewski, sales manager for Webasto Product North America, Inc. “It’s something that the industry is more willing to listen to on the end-user level.”

The emissions selling point can also be used when companies take their products to the bus and engine OEMs. Since the 2007-compliant engines route some of the engine heat to burn off emissions in the exhaust system, less heat is available to the rest of the bus.

“There is less heat to warm the inside of the bus cabin and to defrost the windows,” said Baczewski. “You have to find a pretty good balance of what the end user is looking for.“

Finding Emissions Funding
In the end, school districts must have the money to add heaters as part of their emissions reduction and anti-idling programs or to keep their buses running in the cold winter months. Fortunately for many districts, there are ways to offset the costs with government grants.

“Grants are available to school districts and school bus operators at both the state and federal levels to help retrofit buses with anti-idling solutions,” said Curliss.

A number of school bus fleets have been retrofitted to control emissions with money from the EPA’s Clean School Bus Program. To help transportation departments find similar funding, some companies keep the lines of communication open with certain government agencies.

“I work diligently with the EPA from the federal level down to the local state level,” said Dennehy. “We don’t understand their decision-making process, but we recognize that they are trying to do the right thing.”

Kurt Vanportfliet, a Webasto dealer in Denver, has sought funding through the EPA and the Congestion Mitigation and Air Quality (CMAQ) Improvement Program. He is currently involved in a major retrofit program with 13 school districts in Colorado, which began in 2005. By 2008, the program will have retrofitted approximately 4,500 buses all together.

“It is a combo anti-idling/emissions controls program — the SuperBus,” said Vanportfliet. “We work with school districts to educate them on the products and the return on investment. We create a demand for the product in the marketplace and then the non-profit organization seeks funding.

“We looked at the EPA’s map of the U.S. that have non-attainment areas, and we know the federal government would be providing funding for their air quality program. It made sense to go into these areas and develop programs.”

One of the districts involved, Aurora School District, is currently 90 to 95 percent finished with the engine heater installs and 60 percent complete with crankcase filter and DOC (exhaust system) installs, according to Fleet Manager Phil Bowser.

Reprinted from the September 2007 issue of School Transportation News magazine. All rights reserved.