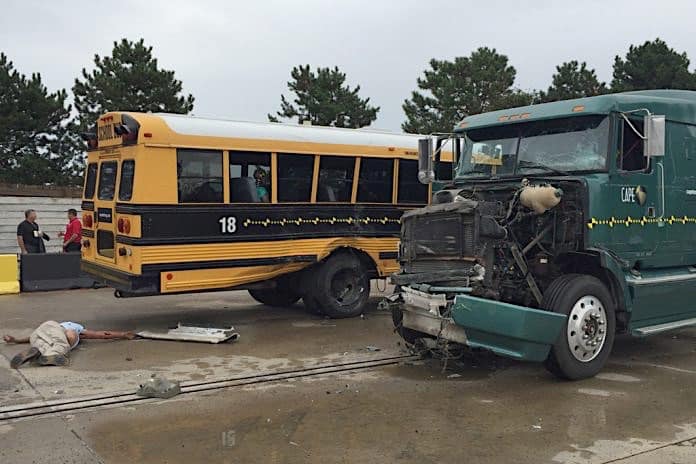 WESTFIELD, Ind. — A controlled side-impact crash of a semi-truck into a school bus demonstrated the benefits of lap-shoulder seat belts.

The crash test simulated high-profile, fatal school bus crashes occurring several years ago in both Florida and New Jersey. The National Transportation Safety Board (NTSB) studied both incidents and concluded that lap-shoulder belts would likely have saved lives because the occupant restraints enhance school bus compartmentalization, or the protective envelope that high-back and cushioned seats afford students.

NTSB found that compartmentalization, alone, is only effective in keeping properly seated students within the seating area during frontal and rear impacts. However, side impacts and rollovers cause unrestrained students to move laterally outside of the seat compartment, which can cause serious injury or death.

The 35,000-pound, radio-controlled semi traveled down an 800-foot track and into collided into the right rear axle of the 17,000-pound, model-year 2001 conventional school bus. A crash test dummy was behind the wheel of the semi while another 10 dummies, six of which were secured by lap-shoulder belts, were situated in the school bus.

Tribbett added that Tuesday morning’s rain resulted in the wettest conditions for an IMMI crash test so far. It was also the 18th crash demonstration performed at CAPE, a 24,000 square-foot facility that opened in 1996.

IMMI and CAPE officials will next review both external and onboard video recorded during the crash test to determine the exact movements of the crash test dummies and exactly how the largest dummy was ejected. A final video is expected to be released publicly later this year.

Following the crash test, IMMI presented a panel discussion on the adoption of three-point seat belts in school buses that included the perspectives of school district officials and national association representatives. Facilitated by Angela Cain, a former television news anchor in Indianapolis, the panel featured the real-world experiences of Tom Cohn, director of transportation at Helena Public Schools in Montana, as well as those of Clark-Pleasant Community Schools Superintendent Dr. Patrick Spray and Director of Transportation Bob Downin.

Also participating on the panel were Diana Hollander, state director of transportation at the Nevada Department of Education and the current president of the National Association of State Directors of Pupil Transportation Services (NASDPTS). Nevada became the third state earlier this year to pass a law requiring three-point seat belts on school buses. The law takes effect in 2019.

Michael LaRocco, state director of transportation at the Indiana Department of Education and the president-elect of NASDPTS, rounded out the panel with James Johnson, managing director of bus sales at IMMI.

IMMI also recognized eight local school districts with awards for implementing school bus lap-shoulder belts in their school buses despite no state law requiring them to do so.