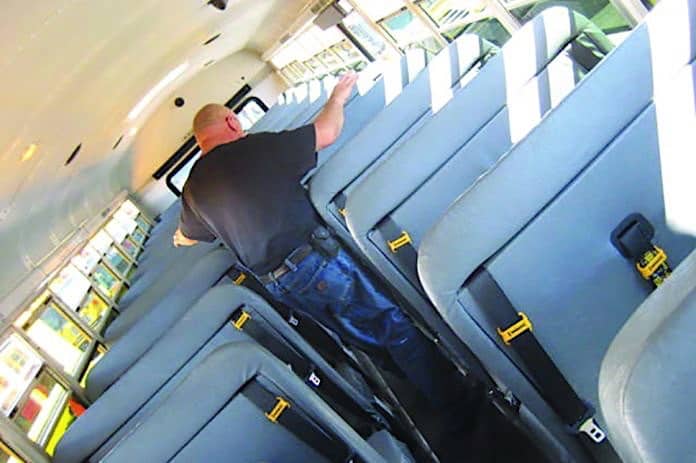 Use of lap-shoulder belts continues to top the list of controversial conversations in the world of school bus transportation. School districts across America are increasingly weighing the pros and cons regarding the use of the three-point belts, and opinions on usage range from one end of the spectrum to the other.

While some school districts research the safest way to transport their students, including the use of occupant restraints, others believe that the current bus design with compartmentalized seating is by far the safest option for all students riders. Amid all this, an average of only six school-age passengers die nationwide in bus crashes each year, according to the National Highway Traffic Safety Administration (NHTSA). However,the feds estimate the number of injuries to be in the thousands.

NHTSA, at least under the Obama administration, recommends that all buses be equipped with seat belts despite previous research that the occupant restraint systems might save one additional student life a year. Federal law already requires seat belts on smaller school buses weighing 10,000 pounds or less because the vehicles are lighter than conventional or transit-style buses and are built more like cars and vans. They often carry preschoolers or special needs children.

Currently, two dozen states have legislation pending that, if passed and signed into law, would mandate lap-shoulder belts. Tennessee introduced a bill in response to the Chattanooga school bus crash in November. Since, the legislation has advanced through committee and has triggered interest in a similar lap-shoulder seat belt bill in Ohio, which rejected such a bill in 2014.

Charles Vits, market development manager for Safeguard/IMMI, has been designing the belts and studying their effectiveness since 2002, when a pilot program was initiated in California. In 2005, the state passed a law requiring the installation of three-point belts in large school buses as well as in small buses. The pilot program examined the initial placement of the belts, the transition of the use of belts by the students, the communications with the transportation operations, the initial resistance to the change, and the effect of the new three-point system on school districts.

“Our studies showed that kids do wear them, and it was shown that by belting students in, there was significant improvement in behavior, there was a much calmer environment, and no kids were running around the bus,” he added.

Vits also said that many districts nationwide are moving forward with lap-shoulder belts as shown by increased seat belt sales and via word of mouth. This despite no new laws passed, at least as of this writing, that require them to do so. But he added that successful implementation of lap shoulder belts in a school district requires “buy-in” from all parties involved about their usage school buses prior to roll out. This extends to the school board, administration, parents, the media, and the community at large. SynTec Seating Solutions and Thomas Built Buses approached Iowa’s Des Moines Public Schools last fall with an invitation to test lap-shoulder belts for one year and to determine what interest there might be in converting to the occupant restraint system. The study began in October, and six months later the district is ordering eight new buses installed with the seat belts for the coming school year.

Todd Liston, DMPS transportation director, explained that the two equipped buses that have been cycled throughout the district and their drivers have reported that the seat belts have made it easier to manage students, which range from pre-K through 12th graders. Liston added that the district originally intended to purchase nine new buses without lap-shoulder belts, but the added cost of the occupant restraints required him to trim the order by one vehicle. Gradually, the district’s goal is to replace all 136 buses in the fleet with three-point belts.

“What we’ve done with these buses this year has led us to getting belts in our future buses. Kids are used to using seat belts these days.” Liston said, adding that the district has not received any negative feedback from the drivers.

However, not all school transportation experts favor using the three-point belts. Responding to the recent STN survey, Ed Hennerley, transportation director at Queen Creek Unified School District in Arizona, said he is opposed despite the district owning similarly equipped buses. Hennerley, a 40-year veteran of school transportation, said he believes the school bus is already the safest mode of student transportation and that compartmentalization provides the ultimate safety for the students. “I’m all for safety, but I have a better idea—train your drivers,” he added.

Training, Hennerley continued, begins with hiring the right person for the job and being proactive in training and testing drivers properly. Hennerley’ said his concerns center on how the belts can be readily adapted from a small grade school child to a larger high school student, though all seat belt manufacturers have been offering “3/2” seating configurations for the past several years. He also said he’s concerned about children not being able to be quickly release themselves from the seats in case of a rollover, or a bus breakdown on a railroad crossing, for example.

But Vits at SafeGuard explained how the buckles used on the belts are released in an evacuation or rollover incident by pushing one button, therefore releasing a child in a controlled manner. He also pointed out that lap-shoulder belt buckles must comply with FMVSS 209. “Therefore they must release with the same button force whether or not there is a load on the belt system,” Vits added. “This allows the controlled dropping of a child that has suffered minimal injury compared to the unrestrained child that was hurled across the bus and now may be unable to move and evacuate because of injuries suffered.”

But Grover also He also said he is concerned with Randy Gover, transportation director of Weatherford ISD in Texas, currently only uses the lap-shoulder system for special needs students but added that he is in favor of adding the occupant restraints for each of his big buses, if funding would be made available. A state law requiring three-point seat belts passed 10 years ago, however, the requirements are contingent upon funds being appropriated by the state legislature, and that has yet to happened aside from an initial grant program. “Compartmentalization is safe for head-on collisions, (but) lateral force is not friendly to students,” Gover said, echoing recommendations by the National Transporation Safety Board. “My biggest concern is for buses traveling on highways with band or athletic groups, especially where a bus might roll over in rural areas where road erosion exists.”

During the recent TSD Conference in Texas, Blue Bird and supplier partner HSM Transportation Solutions announced that a factory seating option will be available to customers for the 2017-2018 school year to ease district transitions to lap-shoulder belts. It is a convertible solution allows the bus owner to change the seat-back frame to accommodate three-point seat belts without the operator needing to purchase all new seats and install them on the bus. Similar standalone products already exist on the market from HSM as well as SynTec ad SafeGuard, the latter which also partners with IC Bus on the convertible BTI Seating System.

Reprinted from the May 2017 issue of School Transportation News magazine.