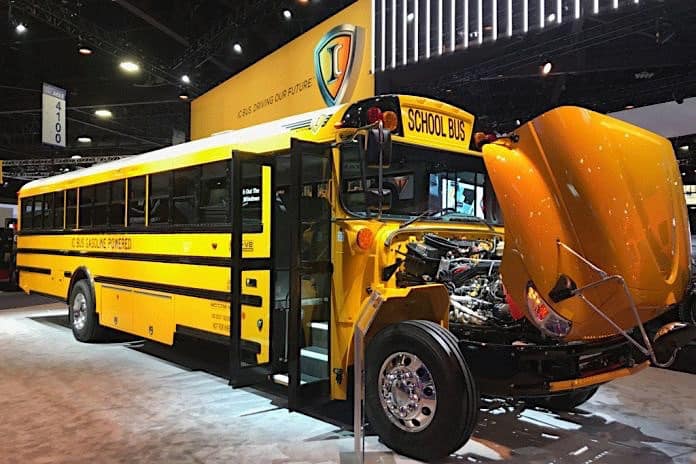 IC Bus parent Navistar said it and Volkswagen Truck & Bus are developing a Class 6/7 electric truck and releasing it in late 2019 or early 2020, signaling that a ZEV school bus may not be too far behind.

The announcement was made on the first day of the North American Commercial Vehicle Show in Atlanta.

“VW Truck and Bus has helped develop this electric technology and though our alliance we are able to leverage it,” Mark Johnson, vice president of marketing for Navistar, told STN Publisher Tony Corpin on Monday.

Troy Clarke, Navistar’s chairman, president and CEO, explained in a statement that the company can “move much more quickly into electric propulsion” with the aid of VW Truck and Bus technology investments and components. “We believe the Class 6/7 vehicle is ideal for electric powertrain solutions in the near term, given its abundance of packaging space, and that these vehicles typically run short distances and can depot to recharge at the end of the day.”

The two partners also announced their intention to converge OnCommand Connection and RIO to a Volkswagen Truck & Bus global connected vehicle platform. The companies said the first step is the adoption of common, in-cab connecting device hardware that Clarke said would create the world’s largest global ecosystem for commercial vehicles that will provide, among other things, predictive analytics and parts failure forecasting.

Volkswagen Truck & Bus added that it expects to launch the cloud-based, brand-independent platform by the end of the year.

Clarke testified before a House committee earlier this month urging the Senate to include commercial vehicles in legislation directing the National Highway Traffic Safety Administration to establish federal regulatory standards for autonomous vehicles.