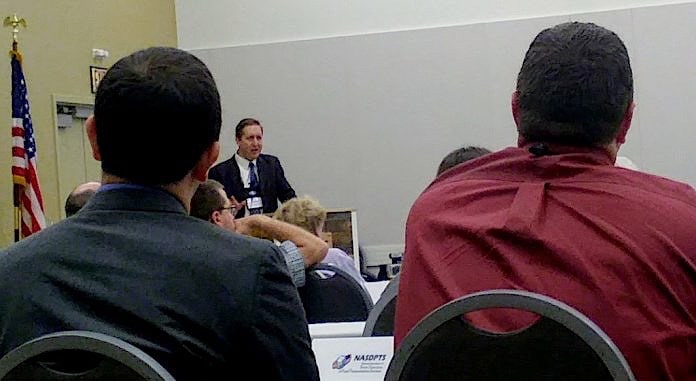 Highway safety specialist Jeremy Gunderson informed attendees at the National Association of State Directors of Pupil Transportation Conference earlier this month on safety initiatives that are currently being worked on by the National Highway Traffic Safety Administration.

Gunderson explained to attendees that, due to NHTSA currently having no administrator, “no additional budget is allotted to school bus safety above the present level.” But, he said, there is much NHTSA is currently working on in that area.

He recapped former administrator Mark Rosekind’s Nov. 2015 recommendation “that school buses should have three-point seat belts. Period.” Gunderson acknowledged that he observed “a lot of focus on the seat belt issue” at the NAPT and NASDPTS Ohio Conferences.

He explained that there is as yet no federal law or mandate for lap-shoulder belts seat belts on every school bus,  because “there is a lot of competition for these funds” that are available for student transportation. Those at the federal level, he said, don’t want fewer kids to get school bus rides because of increased costs relating to the manufacture or retrofitting of school buses to include seat belts.

NHTSA is, however, in favor of education on the proper usage of lap-shoulder seat belts on buses that have them. A current project is focused on understanding districts’ decisions and funding when implementing seat belts on buses, developing a model policy and best practices for districts looking to add seat belts, and researching the role the belts play in improving student behavior. Gunderson said the association would also like to correct misinformation regarding the seat belt issue, since it receives several questions each month on the topic.

Another NHTSA project involves determining the best way to gather school bus crash report data, due to inconsistent crash report data coming from states. When a nonfatal school bus crash occurs, the information gathered should include injuries, use or nonuse of seat belts, driver experience, type of road, trip purpose, the party at fault, and other school bus fleet data. An area of current research is analyzing crash data to determine “the likelihood that a crash might have been avoided if ESL (electronic stability control) was present.”

Gunderson shared that NHTSA’s goal is to spur uniformity among all states when it comes to state laws. Those include school bus inspections, driver training and continuing education, maximum age of school buses in operation, speed limits for school buses, and safety technology aboard buses.

On behalf of NHTSA, Gunderson thanked the state directors present for the illegal school bus passing count that NASDPTS sponsors every year. The results of that count determined that approximately 14 million school bus stop arm violations occurred during the school year. “I was shocked when I was made aware of that statistic,” said Gunderson. NHTSA plans to assess state and local efforts to combat the epidemic, enhance a best practices guide, and develop a program to be piloted in one community that focuses on reduction of illegal school bus passing.