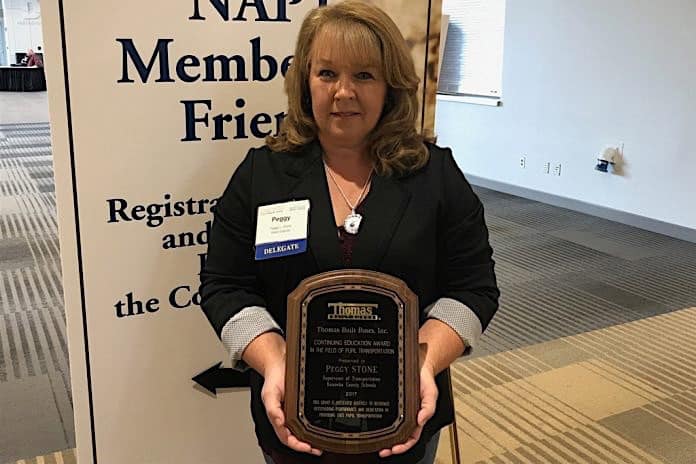 NAPT said that the award and its accompanying grant given on Saturday were “created to help further the education of an NAPT member in the field of public school transportation.” Stone has been attending the NAPT Summit and taking the association’s Professional Development Series courses since 2009. She said her goal is to become an NAPT Certified Director of Pupil Transportation.

Kanawha County has 164 buses that transport 25,000 students daily. Out of her 21 years in student transportation, Stone has been a supervisor there for the past 11 years. She told STN that “in a lot of things, we’re way ahead of the game.”

“We try to pilot a lot of different things for the state,” she continued. One of those things currently being piloted is the Guardian Angel, which provides a beam of light to illuminate a student’s path to cross the road when it is dark. The county also piloted the extended stop arm being showcased at the trade show. All their school buses have Wi-Fi and soon all will have fire suppression systems.

The county piloted propane school buses, and while it has yet to purchase any, other West Virginia counties did as a result. Stone shared that she would like to perform a pilot program on RFID cards for student tracking.

The driver shortage in the county has forced Stone to combine five routes into other routes, and she also drives a bus “almost every day.” However, she shared that management has developed good relationships with the local media. Their promotion of the job of school bus driver has resulted in increased applications.