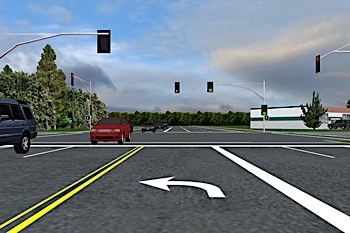 The study, funded and published by the Oregon Transportation Research and Education Consortium, monitored specific eye movements of motorists from Oct. 1, 2011, through Dec. 31, 2012. Researchers found that motorists who wait at intersections to turn left, and sometimes “lunge” forward into the intersection, focus their attention on the flow of traffic and the signal rather than any pedestrians crossing the street. As a result, pedestrians are often an “afterthought.”

“There are far more pedestrian crashes in marked crosswalks than anywhere else on roads, and pedestrians already have a false sense of security,” said David Hurwitz, an assistant professor of transportation engineering at Oregon State University. “This study found that one key concern is permitted left turns.”

These permitted left turns, the researchers said, are often allowed by a “hodgepodge” or lack of signals that confuse motorists, who are forced to “pick their way” through narrow windows of traffic. Protected left turns, on the other hand, are those that utilize a solid green arrow to indicated to drivers when they have the right of way to complete their left turn.

Individual school bus operations may forbid left-hand turns. The Safe Routes to School guide on Determining School Bus Stops recommends to “avoid or limit stops that require the school bus to make a left turn anywhere along the route.”

Using Oregon State’s full-scale driving simulator that tracked specific eye movements, the study was done with 27 subjects experiencing 620 permitted left-turn maneuvers. The research facility allows test subjects to see, experience and react to realistic driving experiences while scientists study their reactions and behavior. The traffic engineers found that about one time in 10 or 20, the driver didn’t look to see if a pedestrian was in the crosswalk before moving into the intersection. This suggests a “major level of risk” to pedestrians if they assume that drivers will not only look for them, but also allow them to cross the street before proceeding.

The study also found that the problem is aggravated by the permitted signals that can vary widely from state to state and city to city. Examples of permitted left-turn signals are a flash and circular green, yellow and red lights as well as a flashing yellow arrow. The researchers pointed out that more consistent national standards on the flashing yellow arrow were recommended in 2009 but the process of upgrading these signals across the country “takes time.” The researchers concluded more states and cities should consider banning permitted left turns while pedestrians are allowed to cross. They said traffic managers in Washington County, Ore., did just that in response to a high number of complaints about pedestrian-vehicle incidents.

“In traffic management you always have multiple goals, which sometimes conflict,” Hurwitz said. “You want to move traffic as efficiently as possible, because there’s a cost to making vehicles wait. You use more fuel, increase emissions and waste people’s time. The permitted left turn can help with efficiency.

“But the safety of the traveling public is also critical. Sometimes the goal of safety has to override the goal of efficiency, and we think this is one of those times.”

The research will be presented this June at the Driving Assessment Conference in Bolton Landing, N.Y., and in July at the Western District ITE meeting in Phoenix.