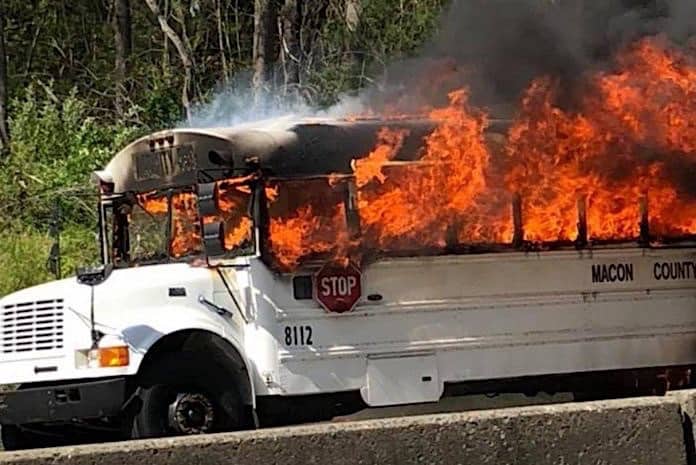 Two recent school bus fires resulted in no more than burned-out vehicles when their drivers put their training into practice to keep their students safe.

Carmen Chavez, a veteran school bus driver for Lee County Public Schools in southwestern Florida, was on her morning route to Challenger Middle School on April 27 when she heard noises coming from the engine.

“The fire started when the compressor in the engine locked up, causing a loud popping noise, which let Chavez know that something was not right,” the district said in a video update.

Smoke followed the popping noise, and Chavez radioed the yard to let transportation personnel know what was going on and that she was evacuating the students off the bus. Video shows smoke billowing and almost engulfing the bus.

“As soon as I saw that I said, ‘that bus is going to blow up, so get away as far as you can go,’” Chavez recalled.

The Cape Coral Fire Department arrived to put out the fire, which it said was “accidental due to a mechanical failure.” The district said that the bus had just been inspected two weeks earlier. Another bus took the students to school.

The fire department commended Chavez for the way she “quickly, successfully, and safely” evacuated all 22 students aboard. “Thanks to her swift actions, there were no injuries,” it added.

A similar situation occurred on April 28, when Erica Muse was taking students from Macon County Schools in southwestern North Carolina home from an activity trip. Muse and some students heard a pop, which was later found to be from the left rear tire exploding.

After pulling over to the side of the road as soon as safely possible, Muse and the two other adults on board began unloading the students. The bus then began to smoke and flames quickly spread. The district and the Macon County Sheriff’s Office confirmed that everyone was able to get off the bus to safety before it caught fire. As soon as students were a safe distance away, Muse notified the bus yard and authorities.

“According to a few of the students on the bus, the adults were very calm, cool and collected. The adults even had their wits about them to remind the students to get their belongings off the bus before they departed,” shared Todd Gibbs, director of auxiliary services.

Nearby Haywood County Schools loaned the group another bus so they could get home. Gibbs said it is conjectured that the blown tire set off a chain of events leading to the fire, and that a representative from bus manufacturer Thomas Built Bus is coming to examine the vehicle next week.

“Thank you Lord for an alert bus driver and a safe return home for everyone,” said the sheriff’s office.

“We are very grateful for the actions of bus driver Erica Muse,” Superintendent Chris Baldwin told STN. “Her reaction to this incident may very well have prevented the loss of life.”