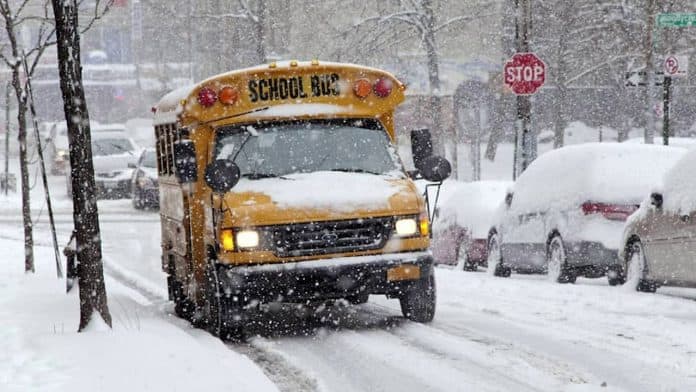 As School Transportation News wrapped up 2019, a few late-breaking business-focused news items of note have been posted below.

• FORT DODGE, Iowa — The Fort Dodge Community School District Board of Education unanimously approved a recommendation to purchase four new 77-passenger school buses from Hoglund Bus Co. from Marshalltown, for $98,459 per vehicle. Two bids were received, reported the Fort Dodge Messenger on Dec. 24. Included in the winning bid was a $7,000 trade-in allowance for four buses the district is retiring. The total net price with the trade-ins is $386,836.

Thomas Built Buses, in Council Bluffs, bid $100,678.50 per bus with a trade-in allowance of $4,000 for the retiring buses. The total net price bid by Thomas Built Buses was $398,714, it was reported. Bill Niemeyer recommended the school board accept the Hoglund bid. The new buses will comply with Iowa state law that requires new school buses to have seat belts installed, Niemeyer noted. Stop-arm cameras are also included.

• MINNEAPOLIS, Minn. — In the growing confrontation between proponents of propane vs. electric buses, the Minneapolis Star Tribune said the Minnesota Propane Association wants the Gov. Tim Walz administration to consider liquid propane as an overall lower-cost alternative to spending $4.7 million on electric-powered school buses, out of the $47 million that Minnesota is slated to receive from the Volkswagen cheating scandal funds. According to Gregg Voss, a spokesman for the propane industry, 40 Minnesota school districts now use propane school buses.

Voss claimed that there are 18,000 propane buses in use nationwide that are transporting 1.1 million students daily. The Tribune reported on Dec. 31 that the Minnesota Pollution Control Agency (MPCA) expects to invest $23.5 million over the next four years, with about 65 percent of the funds directed to help electrify Minnesota’s transportation sector.

But that act of generosity wasn’t an isolated case. The previous month, a separate donation of $2,242 was reportedly made from various businesses to also offset the lunch debt of 100 students throughout the district.

• WELLS, Maine — For the past two months, Ledgemere Transportation’s staff of 18 employees collected nonperishable food to donate to the Wells Elementary School Food Pantry for the holiday season, to send food home to needy students during school vacations and on weekends. Ledgemere provides contracted school bus services for districts in Southern Maine, acknowledged Lauren Clark, terminal manager for Ledgemere’s fleet of 18 vehicles in Wells, who stressed that school bus drivers were the backbone of the collection effort. Ledgemere is a Student Transportation of America company.

• MEADVILLE, Pa. — The local mayor of Meadville, LeRoy Stearns, was lauded in December for becoming a first-year school bus driver for Hubbard Bus Service, Inc. According to the Meadville Tribune, he transports Meadville-area students on school days to and from Faith Builders Christian School in Guys Mills.

The Tribune notes that “Stearns, 63, is the only Meadville mayor in recent memory to drive a school bus, but he’s not the only bus driver to win the support of city voters. Larry McKnight, who was elected to City Council in November and will join Stearns in office next month, has been driving for Hubbard for three years, and drove city buses for Crawford Area Transportation Authority for nearly four years before that. While the position is not known as a traditional pathway to elective office, it has its advantages, according to McKnight.”

• CABOT, Ark. — Bill Pay retired from his school bus driver position of more than 10 years in Cabot last month, but he never expected what would happen on his last day of work. On Dec. 20, he drove his final route, but when he drove into the parking garage one final time, a group of enthusiastic local parents and students surprised him with a special thank you gift of $750. “He calls every child by name every single day when they get on the bus,” said Debra Thrasher, a parent of one of Pay’s student riders. “And it’s just a little special touch that makes the kids feel like they’re important and they matter,” reported THV11.

Haverhill Public Schools, located near the Northeast corner of Massachusetts, is on the verge of losing its school bus provider this fall, reported WHAV...
Read more