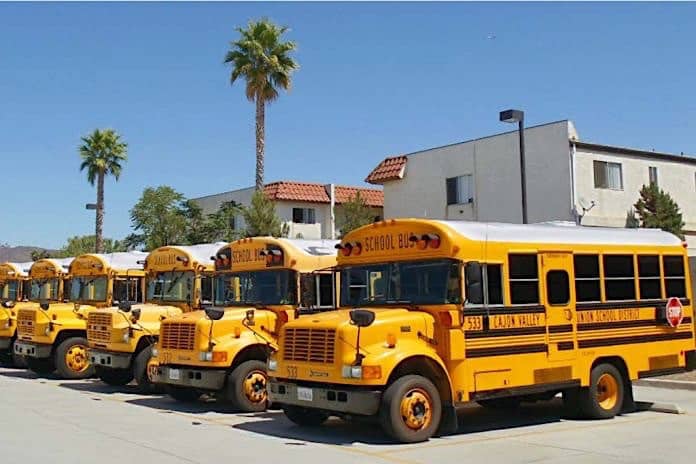 Despite success in the past year of increasing the durability of hydrogen fuel cells, a U.S. Department of Energy report released last month indicates that substantial challenges remain in terms of both cost and durability before it is ready for the commercial school bus market.

The report, “Fuel Cell School Buses: Report to Congress,” is in response to Section 743 of the Energy Policy Act of 2005 and describes the results of ongoing development of the fuel cell school bus.

While the DOE said it was not directly pursuing a fuel cell school bus project, it was releasing the information in efforts to further research and devlopment of the alt fuel . The report added that the saturation and validation of fuel cell systems may make the technology an attractive option for school buses, particularly for public health reasons. Water is the only tailpipe emission for fuel cells, and DOE said that the systems would offer a clean transportation option for school systems, particularly in urban areas where air pollution is a problem. Fuel economy of hydrogen is also reported to be twice as high as conventional diesel buses currently in service and approximately 12 percent more efficient than current gasoline hybrid electrics. Manufacturers claim that fuel cell buses may become competitive sooner rather than later when their lifecycle costs are compared to rising diesel fuel prices.

“Given these issues, school bus operators are increasingly receptive to new technologies, but their willingness to demonstrate and deploy advanced technologies and alternative fuels must be balanced with strict financial and operational considerations,” the report said, adding that the industry is especially sensitive to the cost and durability challenges.

Lack of availability is a major culprit. Small numbers of orders relegate current hydrogen fuel cell buses to being purpose-built rather than manufactured on the assembly line due. While the report states that vehicle manufacturers should eventually be capable of producing larger quantities once the technology matures and costs are reduced, manufacturers must first be able to purchase hybrid and fuel cell systems for installation on the manufacturing line. Current chassis manufacturers involved in fuel cell bus projects are: Ebus; Daimler; Gillig; Proterra; New Flyer; and Van Hool.

Hydrogen fuel cell demonstration programs currently in place for the transit industry through an FTA program indicate that reliability of hydrogen fuel cells — often measured as miles between road call (MBRC) — has also been found to be 10 times less than that of conventional technology, a range of between 900 and 1,600 miles for fuel cells compared to 10,000 miles for propulsion-related systems. First-generation fuel cell systems report durability ranges of 1,200 kilowatt hours, or approximately 36,000 miles, and vehicle ranges of 130 to 190 miles. To compete with internal combusion engines, fuel cells must reach 5,000 hours or 150,000 miles and vehicle ranges of 300 miles by 2015.

Other challenges include expected increases in maintenance costs for end users as bus warranties expire, concerns with handling fuel cells during refueling by transportation workers and the high relative cost of hydrogen. Based on the transit experience, hydrogen prices currently range from $8.90 to $18.80 per diesel gallon equivalent. As mandated by the DOE, prices must reach the $3 level by 2015 before the fuel cells will be considered viable alternatives.

The compressed CNG bus market follows a similar development path to hydrogen. Iinitial efforts focused on CNG transit buses, and school bus developers and users were able to benefit from key lessons learned before adopting CNG technology. But it won’t be as easy as simply using existing CNG infrastructure. The psi of both gases differ as do chemical composition, making storage and delivery problematic, the report concluded.