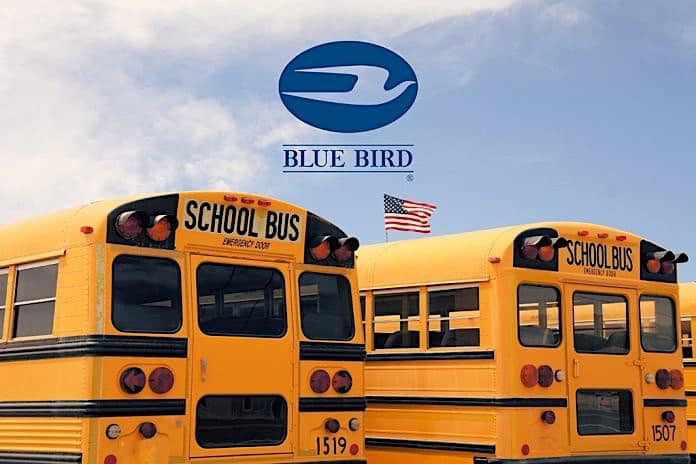 The U.S. Department of Energy announced last year that they would give $15 million to organizations to accelerate the adoption of advanced and alternative fuel vehicles. Blue Bird received the largest chunk of the money.

“As the leader in alternative fuel bus solutions, the addition of an electric school bus rounds out our portfolio,” said Blue Bird President and CEO Phil Horlock. “Thanks to this award … we will be able to pursue the development of this technology based on our many years of research.”

Celebrating its 90th anniversary, the Georgia-based Blue Bird hopes to implement V2G technology that will allow the bus to put electricity back into the grid, which could bring much-needed funds to school districts.

For Blue Bird, the electric-powered school bus is not unfamiliar territory.

“We were first to market with an electric school bus in 1994,” said Dennis Whitaker, vice president of product development at Blue Bird. “Since then, we have been closely monitoring this technology, and have found that recent battery management advances have made this project viable.”

Whitaker said that the new Blue Bird electric school bus should roll out in 2019.

According to Georgia Gov. Nathan Deal, the initiative will help in “the development of a low-cost electric school bus is an investment that could save state resources in the long-term.”

The award stipulates that the electric bus has to be an affordable solution for school districts.

U.S. Senator Johnny Isakson shared in Deal’s excitement, applauding the decision by the DOE to reward companies that continue to make “positive impacts.”

“Blue Bird has a solid reputation and the company has been an asset to Georgia’s economy,” he said.

“I am excited to see they are now able to produce even more solutions that positively impact the environment and future generations of bus riders,” he said.

TransPower President and CEO Michael Simon added that this electric bus solution could also create additional jobs throughout the country.

“Once these electric buses go into production, there is a huge potential for job growth,” he said. “Supplying electric drive components for say, 500 buses a year, would have the potential to create up to 250 new jobs in California.”

National Strategies Managing Director Kevin Matthews, whose firm developed the application, said this project “will take us far down the road to deploying and operating a zero emission school bus that is cost-effective for school districts across the United States.”

“We thank DOE for this award, and applaud Blue Bird’s leadership in this arena,” added Matthews, who will serve as project manager.