Bus Driver for First Student Gets Reflective Belts for her Students

A school bus driver for First Student, based in Helena, Montana, recently felt the need to make school bus stops safer on her route. She decided to act after at least 7 kids were killed at bus stops nationwide last fall, or while loading/unloading their school buses.

Katee Horner has only been driving for a few months, and quickly fell in love with the job and the children.

“This is the first year I have been a school bus driver. I didn’t really know if it was something I wanted to do when I first started, but I fell in love with it and all the kids on my school bus,” Horner said.

As Horner was thinking of ways to make the bus stop safer for the children she transports, she was reminded of the days she wore a reflective belt for various training exercises in the United States Army. In the army, the belts were referred to PT belts, physical training belts, and they were worn when running or conducting other activities, so that cars were able to see them.

“Montana is very dark in the winter. If I am wearing a reflective vest in my school bus yard while I am getting ready to go out on my bus run, those kids aren’t even five minutes away from me waiting to be picked up, also in the dark,” Horner said.

First Student Location Manager Bevann Hamill added that some students are picked up in rural areas, where there are no sidewalks or lights. Especially in the winter there, it can get very dark. Horner said that half the time kids are standing on a dirt road.

Horner made it a goal to get as many kids as she can on her route a reflective belt. She also spread the word around to parents, asking them to help out where they can. 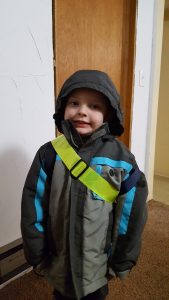 “It went from the kids on the busiest roads first, because they are the most at danger, and then I just went all around my entire bus route,” Horner said. “I am excited that so many parents like the idea. I also had other local businesses find out about it and decide it was a very good idea too. [They also] wanted to help me get all my kid’s reflective belts.”

Hamill said when Horner presented the idea to her, she wanted to expand it to other routes and students. The transportation manager for Helena Public Schools and Hamill split the cost and bought belts in bulk.

“Even if in early summer here, it is bright in the day. But the colors on your clothes blend into all the new colors—the greens and yellows, they are blending in,” Horner said. “But the reflective belt is still making a difference in the daylight time. And I have about 75 percent of my kids still wearing them. I also have a few kids that are close enough to walk home, and they wear them when they walk home from school too.”

Hamill added that Horner has even seen kids on their bikes riding around and wearing the belts. “Especially the younger kids, they really like them,” Hamill said. “She [Horner] has gotten really positive feedback from the kids and the families.”

Horner won second place for her idea in the nationwide safety category for First Student’s “Be First Awards.” Horner said she was honored to just be nominated, and even being chosen as a finalist was “super exciting.”

Horner was nominated by her peers and was selected as a finalist. Over 600 nominations were made in 7 different categories.

“I said, second place is good enough for me, as long as the word gets around that the safety of our kids is number 1,” Horner said. “And that we need to get our kids more visible to other people, especially in the rural areas. … To save a life, you can’t put a price on it. Yeah, the reflective belts, depending on what kind you get, might be anywhere from $4 to $10, but it’s nothing compared to a child’s life.”