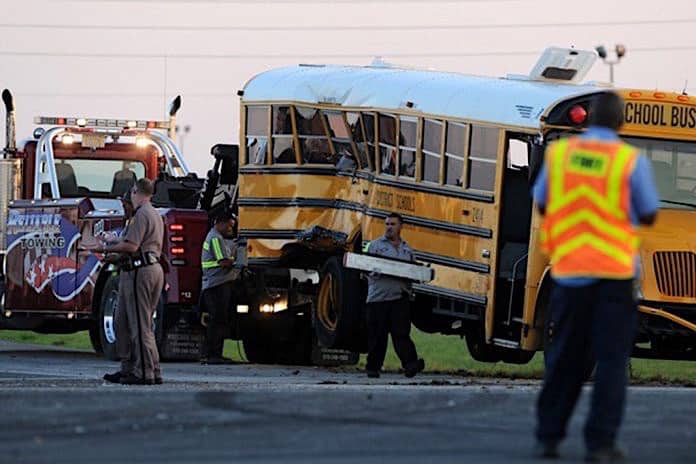 Earlier this month the family of Aaron Beauchamp widened their wrongful-death lawsuit against St. Lucie County School District in Florida to include four school bus industry manufacturers. Their 9-year-old son, Aaron, was killed when his school bus collided with a tractor-trailer in Port St. Lucie on March 26, 2012.

In addition to the school district, the defendants named in the suit include IC Bus of Arkansas, The C.E. White Co. (now owned by HSM Solutions), BESI Inc., IMMI Inc. and I-10 RV Inc. (a.k.a. Rivers Bus Sales Inc.), according to Lytal, Reiter, Smith, Ivey & Fronrath, the West Palm Beach law firm representing the Beauchamp family.

The first four companies were responsible for the design, manufacture and/or installation of the school bus seats and seat belts, said the firm, while the latter sold the school bus in question to the district. The lawsuit did not state the amount of damages being sought.

“As a matter of policy, we don’t comment on pending litigation,” a spokesman for Navistar, the parent company of IC Bus, told STN.

BESI, IMMI and HSM all told STN they were unaware of any pending litigation.

St. Lucie County school bus driver Albert Hazen was cited for careless driving in the 2012 accident that ended Beauchamp’s life and injured 16 other students. The Florida Highway Patrol crash report said Hazen was inattentive as he improperly turned left into the path of an oncoming semitrailer during his afternoon run. The bus spun 180 degrees clockwise and the truck overturned.

Though the victim was wearing a lap belt, its efficacy was called into question afterward. This accident and a similar bus crash in Chesterfield, N.J., a month later reignited the debate about whether seat belts should be required on school buses. The National Transportation Safety Board investigated both accidents and released its findings last July. One key finding was that students in both crashes had either worn their lap belts improperly or not at all. NTSB’s highway accident report states, “In the Port St. Lucie, Florida, crash, the combination of high forces, lack of upper body restraint, and loss of seating system integrity resulted in fatal injuries to one passenger.”

According to the family’s attorneys, Lance Ivey and Matthew Haynes, the lawsuit against IC Bus is a product liability case related to certain “defects and inadequacies” of school bus safety systems, particularly passenger seats. The attorneys claim the NTSB’s investigation confirms their findings regarding the seating system’s failure to protect children during a collision, arguing the bottom seat cushions flipped up on impact.

“It’s time to make these vehicles safer or get them off the road,” said Haynes.

In its 2013 report, the NTSB also recommended to several industry associations that they advise their members to consider three-point lap/shoulder belts “a safety benefit” when purchasing seat belt–equipped school buses. Since then NASDPTS has updated its position to support three-point systems on all school buses, yet NAPT and NSTA have called for more testing before they promote widespread adoption.

NASDPTS President Max Christensen cautioned that a number of facts about the Beauchamp lawsuit remain unknown so it is best to reserve judgment until the matter is settled.

“If indeed there is questionable seating system integrity, those issues will be settled, and fixed, and I believe our industry will be stronger as a result of finding this out,” said Christensen. “The bottom line in our industry is always the safety of the students, so by addressing any potential safety issues we also strengthen that bottom line, thus making the industry better and keeping our kids safer as a result.”