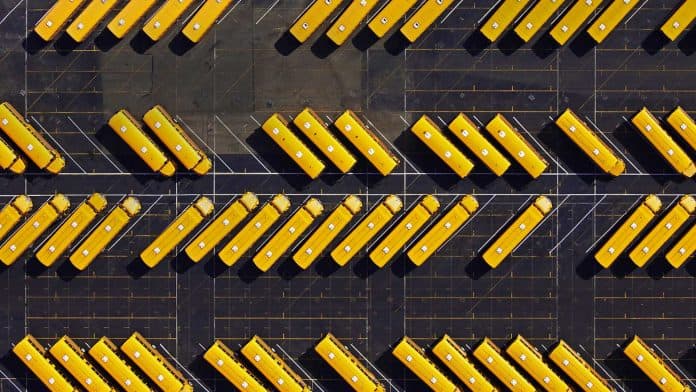 But transportation officials such as Katrina Falk, the transportation director for Shelby Eastern Schools in Shelbyville, Indiana, said operations functioning efficiently will be paying the price for those that aren’t, by the creation of transportation hubs.

“I don’t want to inherit somebody else’s problems and see this get out of control,” she commented of House Bill 1266, adding the law serves to “spread the wealth of these inefficiencies that have run rampant in some of these districts for years because they’ve never concentrated on what they could be doing to make their operations more efficient.”

Falk said she’s disappointed that the School Transportation Association of Indiana (STAI) and individual school districts were not consulted as the legislation was making its way through the state general assembly so that they could provide input regarding what they view as potential negative implications.

“I know we have poor-performing school districts where efficiency is lacking,” she noted. “Why can’t we take a more responsible approach to this and offer them tools, training, and resources through the state association and the Department of Education instead of punishing everybody and trying to meld all of these services together in an attempt to make things more efficient, which it’s not going to be.”

The original language in the bill indicated that the establishment of transportation and maintenance hubs would move from being an option to it being required, Falk noted.

“Our concern right now is because it’s been signed into law – even though a lot of the damaging verbiage was removed from it the last few times it passed through the Senate – it’s easier to put that language back into it as we move forward. It is still asking for the best geographical location for the hubs they’re wanting to establish.”

STAI vice president Matt Miles criticized the bill in a letter to members of the state’s Senate Education & Career Development Committee. His concerns consist of skipping evaluation or analysis of the current state of the governance oversight of school facilities and school bus transportation, he wrote, and also not showing evidence that too much money is spent on operations and not enough on the education fund.

“School corporations have less money to spend in the operations fund and debt service fund as a result of tax caps and circuit breaker losses totaling $306 million in 2020 and $2.59 billion since 2009,” shared Miles, who is also the director of transportation for the Metropolitan School District of Wayne Township. “Losses have been so significant for some school corporations that they have been in jeopardy of having sufficient funds to provide transportation.”

Falk contended that the establishment of transportation hubs will significantly increase operating costs and suggested operational funds would be better-spent financing efficiency studies to identify routes that can be combined, pared-back, or rerouted.

She pointed to her own district’s route optimization endeavors, which eliminated some routes as an example.

“We run 18 bus routes in our district. We don’t want to have bus routes overlapping when they don’t need to or because we’re trying to keep somebody busy,” she said. “If we’re able to accomplish what we did in our district with our cost savings and apply that basic foundation in some of our larger metropolitan districts, they would find this is a more reasonable approach.”

Falk said many view the legislation from a taxpayers’ standpoint in that combined operations save money.

“They don’t understand we have a different bell schedule, that we only have a single-tier routing. Let’s concentrate on what we can do right now to make things efficient and if we need the state to step in and establish more guidelines for an already heavily regulated industry, we can have an open conversation,” she said.

Falk shared that she believes the driving factor behind the legislation was a belief that creating transportation hubs would reduce the operating fund and funnel more money into the education fund.

“Some believe that we are drawing from the education fund for non-educational services such as transportation and building maintenance,” said Falk. “That’s not the case, at least [not] in our district.”

The legislation signed into law provides that no later than Oct. 1, the state’s department of education must issue a request for information to explore potential opportunities to improve the efficiency of non-instructional school services.

The deadline for submission of responses to the request for information may not be later than Feb. 1. By March 1, the department of education will prepare a report based on the responses.

Editor’s Note: School Transportation News reached out to bill author, Rep. Edward Clere, for comment but has not heard back at this writing.