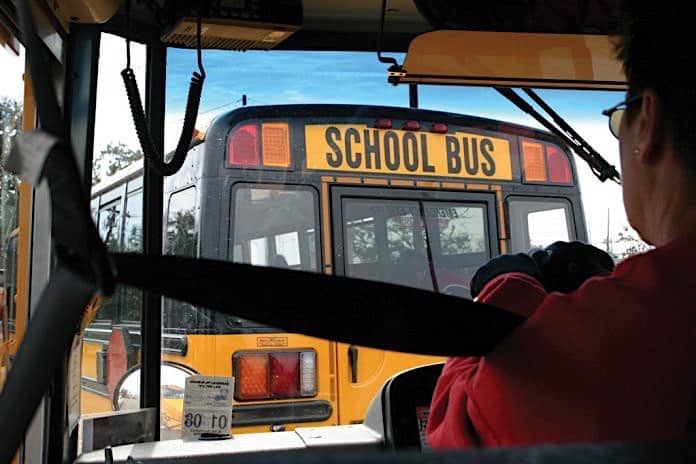 The growing problem of a school bus driver shortage threatens the transportation programs of many schools nationwide while also compromising student safety. Several news reports in recent weeks have shown videos of overcrowded school buses, from Texas to Virginia, which is a direct result of a lack of drivers to cover daily routes. Students are seen standing as well as sitting in the aisles and on each other’s laps.

Veteran student transportation chiefs acknowledge this ageold problem has become worse now that the national economy is improving, sparking more competition from other industries that call for a commercial driver’s license (CDL) and provide steady, fulltime employment with a higher wage.

Adding to the challenge, they say, are the pitfalls of the bus driver’s job, including part-time hours, low pay, lack of benefits, extensive and expensive training, mandatory testing and physical exam, and student discipline problems.

The solitary, stable job of driving a truck may look pretty good to school bus drivers. In western Texas, there is an increased demand for truck drivers due to the thriving oil fields as well as the opening of new distribution centers in Dallas.

Aaron Hobbs, executive director of transportation at Dallas County Schools, said he has noticed a direct correlation between the growth of the U.S. economy and decline in bus driver applicants during his 36 years in the industry.

“Over the years I’ve seen the pendulum swing to and fro, and when the economy is bad, it’s good for (student) transportation. No matter how many hours we have to offer, that’s the way it seems to be. When the economy is good, it’s hard finding drivers,” said Hobbs.

“The economy is so good in Dallas right now. There are a lot of distribution centers that are opening up, they pay decent a salary and it’s eight hours a day,” he continued. “And, unfortunately for us, you don’t have to deal with other’s people’s kids.”

“The reality is, for most districts, it’s a part-time job with extreme hours. People show up in the dark for the pre-trip (inspection) and they leave in the dark after the post-trip, and they’re not being paid 14 hours but five hours,” he explained. “They didn’t become a bus driver to get rich. We have to recognize that and make sure our district recognizes that.”

“Right now with the economy being so good on the gas side, a lot of drivers are choosing to go drive a tanker versus driving a school bus because they get paid more. It’s happening here in Texas pretty heavily, more so in the west part of the state,” said Montes, who joined Houston ISD a few months ago. “Everyone is struggling to get enough bus drivers.”

In May, HISD’s Transportation Department received a community service award for its recruiting efforts from the Near Northwest Management District. The Transportation Department has a recruiting team at each bus terminal that visits neighborhoods, businesses and churches to recruit bus drivers while partnering with community agencies. Current bus drivers can receive $100 for each successful candidate referral. New bus drivers earn $14.95 per hour and are guaranteed five hours per day. They receive 30 hours of paid training and are also eligible for benefits, including retirement and health insurance.

“We try to accommodate the people we hire as much as we can,” Montes added. “We give them all the training we can to help prepare them and make them feel good so we can keep them.”

Even with these incentives, Montes admits it is still a struggle to bring on enough drivers to handle 920 school bus routes. The number of routes keeps climbing, he said, as more people move into the area and as districts
consolidate (HISD took over North Forest ISD last year).

Meanwhile, Dallas County’s Transportation Department gives school bus driver applicants a $250 bonus after they are employed for 60 days and doubles that bonus for applicants who already have a CDL with the passenger and school bus endorsements.

Hobbs said he is hopeful about a newly filled human resources staff position that was created specifically to recruit new drivers. He also implemented a new travel stipend to entice bus drivers to leave well-staffed transportation centers for those in less desirable areas.

“One of our large centers seems to do really well because of its location and it can get drivers very easily, but another center in a more industrial area, any day they could be 30 drivers short,” continued Hobbs. “This program will help balance the numbers.”

He learned from focus groups that the number-one item on drivers’ wish list is more hours. So last year he responded by giving new duties to those with fewer hours in order to boost their pay.

“We try to use them for additional jobs at service centers. We put them on a wash crew or seat repair crew, and some are even data entry clerks. We have a stop-arm camera program, so we have drivers who view the videos to look for violations,” Hobbs said.

People are leaving bus driver and other school support positions in Minot, North Dakota, for new job opportunities arising from an oil boom, according to Barry Brooks, transportation director of Minot Public Schools. He recalled the oil boom hit in 2011, coinciding with a flood that damaged the town, including two schools. Since then, he said the cost of living there has skyrocketed, with monthly rents rising to $3,000 from only $500, for example.

“As the boom affects us, our student population is also going up,” Brooks said. “We’re seeing this statewide. Finding drivers before the boom was tough — but after the boom, it’s even tougher. And compounding that, you have to wait six weeks to get a driving test because of the oil industry (demand).”

He added that when he hires someone who doesn’t have a CDL but wants one, he can’t help wonder if he is training someone to drive in the oil field.

“That’s always in the back of my mind: Am I training a future oil worker?” he shared. “The contractor I use is running into the same problem.”

Large contractors have felt the squeeze as well. First Student Inc. in Rices Landing, Pennsylvania reportedly saw a decline in the number of applicants for bus driver jobs since the natural gas boom there. Dean Cochran, First Student’s location safety manager, told the Herald Standard that applications may be down because the wages they offer are “much lower” than what the gas industry pays truck drivers.

In September, First Student’s operation in Cincinnati, Ohio also found itself understaffed, which led to bus delays for many Cincinnati Public Schools students, according to news reports.

While Maurice Harris, director of corporate communications for FirstGroup America, acknowledged the contractor’s staffing challenges in Ohio and Pennsylvania, he emphasized that various factorscan influence driver recruitment in the school bus industry. For instance, in Cincinnati, First Student received many new routes just prior to school startup and were asked to balance them with charter schools’ schedules, while also recruiting to backfill higher summer turnover than in recent years.

“Each of these factors alone would have had minimal impact; however, the combination of these factors created an immediate need for additional staff on short notice,” he explained. “Within another First Student community, a surge of other job opportunities (Pennsylvania shale) in which a CDL is a requirement, combined  with several retirements and leaves of absence, created some staffing
challenges.”

To manage driver-staffing needs overall, Harris said First Student maintains an active applicant pipeline year-round and promotes company-wide best practices. “For example, we continually review and enhance our driver training programs to ensure that each driver feels confident and equipped to handle any situation that may arise,” he added.

Newport-Mesa’s Meslin also believes that providing regular, hands-on training is key to retaining good drivers. At the recent NAPT Summit, he presented a session titled “Examining the Relationship Between Workplace Culture and Driver Retention,” to share the secret of his success. Yes, his transportation department is fully staffed.

“We don’t train to the minimum; we do 23 hours a year, not 10. In our driver training, they play games, role-play and show their own videos to make it fun and informative,” said the transportation veteran. “We watch for patterns and customize training for what our drivers need. If people feel supported, they won’t leave unless the other opportunity is just so much better…

“Making them feel important is key to keeping people.”