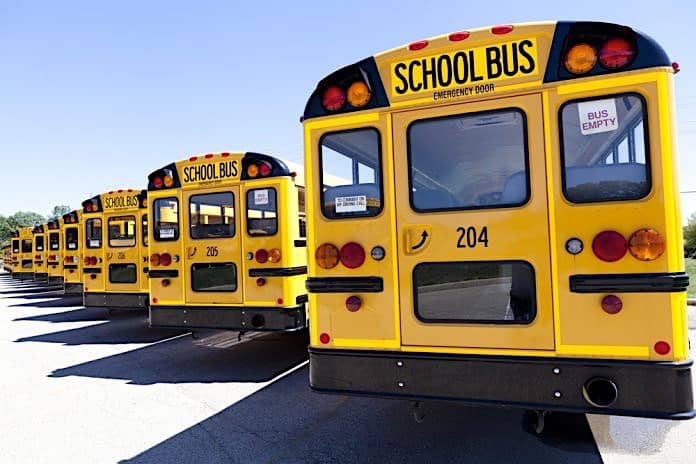 Barry Stock knows a thing or two about going to work for a foreign-held, mega transport company.

With the pending merger of Laidlaw into the fold of First Group of Aberdeen, Scotland, which is expected to triple the school bus operations at U.S.-based First Student, it’s apropos Stock takes the reigns of the National School Transportation Association next month as its president.

First of all, he is Canadian, big news in itself as his ascension to the position is an association first. He also lived through the Travelways purchase of his family’s first go-round in the private pupil transportation sector and its evolution into Laidlaw Education Services. Since 2002, he has worked primarily in the U.S. school bus business for National Express Corporation, another U.K. company that also owns Durham School Services, and which has up to this point been the third largest contractor in the North American market.

Now, as Stock assumes leadership of the U.S. school bus contractors association, First Student, a subsidiary of another U.K. behemoth, First Group, is waiting with baited breath to officially acquire all of Laidlaw, including its school bus business. He understands there might be some in the industry who are reticent of a foreign company owning a 40 percent share of U.S. school bus contractor market and about 15 percent of the total national fleet. But, he says he doesn’t anticipate anything to be nervous about, mainly because all contractors and, as a result, the industry as a whole would stand to also improve.

“I believe First will do an excellent job of integrating Laidlaw into the overall company,” he said recently in an exclusive interview. “When they have that success, it will show people that when a company purchases another company, smaller or larger than themselves, it is possible to have a successful implementation.”

Of course, there is the opportunity for First to increase its scale of business, but it also means significantly advancing its research and development capabilities. And it doesn’t hurt that Stock’s own interests in Durham benefit from the fact the company stands to see its position increase in the national school bus contractor pecking order.

“It’s going to force us as competitors to get even better than what we are,” he added, agreeing that First’s current development with Child Check Mate of the Theft Mate vehicle intrusion system is one example of the changing school bus landscape. “That’s a good thing for the industry. The better we get at fine tuning our services, the better we get at understanding what our employee requirements are and how to ensure that we’re giving them everything we can in terms of tools to get the job done right. It’s going to make it better to serve the children.

“I think that’s the bottom line. Let’s not lose focus of our customers.”

At this writing, with a final acquisition approval still pending from the U.S. Department of Justice and its Canadian counterpart, history figures to remember him as the one who dealt with the aftermath.

“Each of the NSTA presidents that I have worked with has a unique style and leadership qualities,” said Robin Leeds, NSTA’s industry specialist. “I think Barry’s strength lies in his thoughtful, deliberative approach to problems, and in his inclusive management style.”

Prepared for the Challenges Ahead

Stock was basically groomed from birth to enter the school bus business, but don’t think for one minute it came with a silver spoon. One could say he was groomed to get where he is, and it would be a quite accurate depiction, but it was not without much of his own passion and perseverance.

His father Jeff and uncle Jerry started Stock Brothers Bus Lines in 1958 and sold business to Travelways 10 years later. They continued to work for the Markham, Ontario-based company until 1979, when they added a third partner and started a new 25-bus operation, Stockway Transportation, with a mandate that no other family member would be allowed to join fold.

“That forced all of us, once we graduated from school, out into the real world,” Barry recalled.

But school bus yellow still coursed through his blood, and that of his close relatives. Cousin Brian went on to work for the Charterways school bus company, the Canadian owner of the old National School Bus Company in the United States. Meanwhile, Barry moved west to Alberta and joined Cardinal Coach Lines, which was later purchased by First Student.

All the while, the collective brain trust gained steam through hands-on experience. It began to all come together in 1984 when Barry and Brian formed Stock School Bus Service. With those wheels in motion, four years later, Barry and his brother Greg started Stock School Transport in Ontario. By 1992, Barry, Brian and Greg combined the two businesses with Stockway Transportation and the new company Stock Transportation was born.

Then, with National Express Group’s purchase of Stock Transportation and of Durham, Barry found himself as a senior executive of an London-based company that also had a reach into Spain. But it was in North America, and for the past eight years specifically the United States, where Stock has focused his efforts, as his cousin Brian handles most day-to-day activities north of the border.

First of all, the average Canadian school district is much larger than its average American counterpart. At Durham, for example, what it calls its customer service centers in Canada are twice the size of those in the states. Secondly, on average across all provinces, 78 percent of the school bus market is privatized in Canada, whereas contractors represent about a third of American school bus operations.The varied work experience has made Stock a leader to be reckoned with.

“I think the world of Barry; he’s a very talented guy, very bright, very hard working,” commented Steve Hey, the general manager of private company School Bus Inc., in South Dakota and the chair of NSTA’s strategic planning committee. “He’s been a real asset to our organization. I have every confidence he’ll do a great job as our president. More than that, he’s a first rate guy.”

“He’s got all the tools (to deal with the issues). He knows the problems we all have,” added John Corr, who himself was preparing to complete his own two-year term as NSTA president and return his undivided attention to his own company, The TransGroup, LLC.

And the transition won’t be without it’s challenges, as NSTA pushes on with its strategic goals, namely increasing school bus funding from Homeland Security and emissions reduction funds from DERA and CMAQ, furthering the initiatives of the American School Bus Council, not to mention continuing its successes against transit encroachment and, oh yes, increasing association membership through its specialized toolkit programs.

“Without an executive director, (being president has) been very demanding,” Corr added. “Thank goodness we have a good cast of people around us.” “I want to build on what Dale (Krapf) and now John has done for the last couple of years,” said Stock, who views his new role as that of a consensus builder. “I think John has done an outstanding job in furthering our initiatives (recently) in D.C., and there’s no question that there are a significant number of items that we have to keep moving forward.

“There are many elements in the industry that we are all on the same wavelength for. It is much more powerful for us to have one voice.”

Reprinted from the June 2007 issue of School Transportation News magazine. All rights reserved.