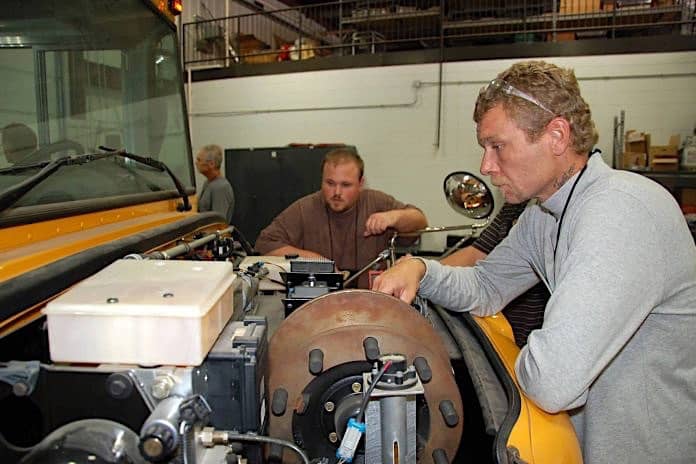 The sight of a grease-under-the-nails, rag-in-the-back-pocket, seasoned mechanic leafing through the stained and dog-eared pages of a parts catalog is an enduring image for anyone who has spent even the shortest amount of time in a bus garage.

While it’s one that could become a distant memory with the adoption of online ordering and parts management software, equipment suppliers want to make sure they continue to deliver information in the form customers prefer.

Technology is leaving its mark in a slow and seemingly unstoppable march that mirrors its adoption throughout society.

“The day of the grease board and ‘tracking bus No. 2’ on it are essentially gone,” said Scott Latimer, aftermarket parts manager for IC Bus.

But Latimer and others on the supplier side acknowledge that march isn’t over yet, thanks in large part to a number of Baby Boomers still in the picture.

“We have different generations—Millennials and Baby Boomers. We have to cover that multigenerational span and make it easy for everyone to order,” said Ken Zagroba, product support manager for IC Bus and Navistar’s integrated parts catalog and online parts sales.

“With Millennials, everything is online. You see them with their heads down, looking at their Smartphones and tablets. It’s the way the future is going. On the Baby Boomer side, many will order online, but they’ve built a relationship with their salesperson over many years and they still like that face-to-face contact.”

While still sensitive to the preferences of old-school mechanics and fleet managers, Daimler Trucks North America (DTNA), parent company of Thomas Built Buses, began to hasten the online transition more than a decade ago.

“Everything of ours is online. It’s just a sign of the times,” said Brian McCool, Thomas Built’s manager of parts marketing and specialty sales. “We have very little paper copy.”

But, he added, “A customer can still request one and we’ll make one if they want.”

McCool noted that his first college computer class required him to create keypunch cards fed into a room-sized main frame.

“Now, my son carries on four text conversations faster than I can speak,” he said. “It’s a natural progression that people have gotten more computer savvy as they go along. There are not very many people who don’t go on in the internet and look up parts.”

There are times, however, when busy customers will still call in a bus VIN to the parts department and explain what they need. “It’s easier for them,” McCool said.

He believes different customers also have different psychological motivators for the way they shop.

“They could be like me. If I’m looking for a part, I’d rather have it be me who made a mistake and not anyone else. For those people, we allow them to take more charge,” he said.

Jason Johnson, service equipment manager at the Horseheads Central School District in New York state and president of the New York Head Mechanics Association (NYHMA), describes his work force—like many across the nation—as a mixed bag with “older, middle and newer generations.”

In his facility, he said, “The (mechanics) with 20 or 30 years or experience —or more—tend to be the book people. It’s hard to change them into the new-style generation people, who go online to see what they need,” Johnson said. “Sometimes, people don’t want to go online or go to a picture. They want that direct eye contact and to have someone answer their questions face to face.”

The NYHMA also hosts an annual summer seminar where its members have an opportunity to meet with parts representatives. This year’s event will include classes on web-based inventory systems. Johnson is in the process of lining up presenters to demonstrate new systems to keep shops up to date with inventory management.

Despite the momentum toward the internet, suppliers continue to vary in their approaches with some still offering paper catalogs, others deliver almost everything online and still other relying more heavily on salespeople who make in-person visits.

“We work with a lot of businesses that still take all three approaches. We have a lot of sales reps come into our building,” said Johnson, who, after 16 years in the business, personally prefers those on-site calls. “I love people coming in and showing me a part. It means they want my business,” he added.

These days, Zagroba estimated 75 percent of IC Bus part orders from end users come online; 100 percent of dealer orders are electronic. He also agrees with Latimer that the ordering process is all about maintaining good relationships and understanding what the customers wants.

“Some want ownership. Some want boots on the ground, in the shop, shaking hands, face to face,” Latimer said.

Zagroba added, “We have that agility to handle both.”

Jeff Merten, Blue-Bird’s vice president of parts and service, said the Fort Valley, Georgia, manufacturer continues to offer many materials in printed form but “we are definitely seeing a move toward the online tools.”

“Blue Bird Vantage is the central online portal that our dealers and customers utilize.  This is a great one-stop online source for Blue Bird parts and service information.  Through this portal dealers and customers have access to parts manuals, service manuals, wiring diagrams, specific bus parts information based on bus body number and the ability to file warranty claims.”

The company recently launched an online interface in place through Blue Bird Vantage called Blue Bird Support Center. Dealers can submit inquiries via the system, which balances the personal relationship parts managers have with their dedicated customer service reps while leveraging online tools.

Merten noted that most customers order parts directly from Blue Bird’s dealers via telephone, fax or through their dealer’s outside parts salesperson but, he added, “We have found that customers still like the personal contact of a sales rep calling on them.”

McCool said a DTNA team is working to integrate the catalogs of its subsidiaries into a single format to make the online ordering process even simpler for dealers and end-use customers. The reason: Thomas Built Buses may include parts from other DTNA companies, such as Freightliner and Detroit Diesel.

He anticipates that process will be complete this year.

“It’s not a simple process. There’s a lot of information, but it is going really well,” he said. “Customers will be able to go to a one-stop shop and look up everything on one site. That’s what they’ve requested.”

“If you’re ordering an elbow or a U-bolt, online is a nice option to have. But there are so many buses with different engine, different catalytic converters trucks and so many other features, that it’s literally a very challenging for the person in their shop,” said national sales manager Rich Straw.

“We highly recommend that people call in. That’s how our business was built—by making the process as easy as possible I know every company is different but we have three guys in sales with more than 60 years of combined experience. if it was me trying to replace an exhaust system, I’d want to talk to someone who knows as much as they do and know what I would need to do the job.”

Latimer sees the industry moving toward online inventory management, too, especially as fleets have become more diverse over the years.

“That’s certainly the trend among more savvy folks. They are tracking costs per mile, parts life and a lot of other critical data,” he said. “There’s a lot of market intelligence at your fingertips now.”

McCool also touts DTNA’s ecommerce system where dealer inventory systems allow customers to see which parts are in stock—and at what parts distribution center—so they can better anticipate when a much-needed part will arrive.

“It’s going to be one of those things that requires a little training,” he said. “But a customer can stick in a VIN and look on another page (on a website) to see who has it and put it in stock.”

His system lets him know how long a part has been in service and when he’s running low on a particular part.

“When I came in, there was no parts program at all. An auditor or anyone else really had no idea what parts were where,” he said. “Now, with a couple clicks of a button, I can tell you where a part is and when it was put on that bus.”

He encourages fleet directors and service managers to “get out there and see the different parts programs.”

“There are so many of them, you could spend weeks looking at them,” Johnson said. “I love the system I use. I’m not knocking any other system, though. They can do so many things.”

McCool sees the writing on the wall. “People who started in the industry in the last 15 years never started with paper. They started with computers,” he said. “Ten or 15 years from now, this won’t even be in the conversation.”