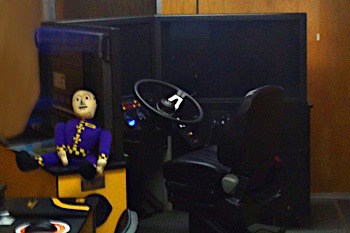 It has been two years since Education Service Center (ESC) Region VI in east Texas added a school bus driving simulator to its bus driver training program, and so far it has served nearly 2,000 bus drivers and saved the lives of at least two children.

Housed in a 38-foot mobile trailer, the simulator is transported to training sites such as school districts, where drivers receive truly hands-on training as part of their school bus driver certification. Benney Raley, ESC VI component director of safety education training, said he got the idea from high school driver’s education courses that utilize vehicle simulators. There are 20 ESCs in Texas that are required to deliver driver training to school districts statewide.

“It dawned on me: Hey, we’ll put a school bus simulator in there,” he recalled. “We saw that drivers needed more training, so we wrote a grant through our state highway department to do extra training. We work with drivers on the bus and in the classroom.

Region VI used both local funds and grant monies to purchase the $200,000 state-of-the-art school bus driving simulator from Doron Precision Systems. The simulator replicates the driving compartment of a typical bus that includes components found in a late-model school bus.

“It’s a bus cab, driver’s seat and steering wheel. When you start the engine, the seat vibrates just like it would with diesel, and there are high-definition monitors in front of you. It’s very realistic looking and feeling,” Raley explained. “We take it out to districts and do simulation training, and it’s been a big hit.” 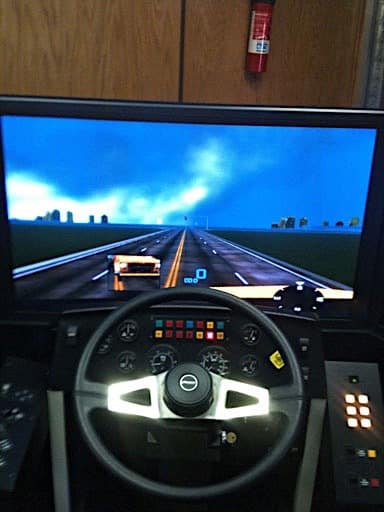 A school bus video game? No, a driver simulator to test on-the-road skills.

The simulation includes dozens of scenarios to achieve specific training objectives the instructor can evaluate. Drivers are confronted with other vehicles, pedestrians, bus stops, railroad crossings, narrow bridges, animals and weather conditions like rain, snow, fog and ice, along with vehicle malfunctions such as tire failure, low air pressure and an overheating engine. The fully interactive system allows students to repeatedly practice difficult maneuvers until mastered.

“You put them in these situations to teach them driving maneuvers. When you hit the curb, you feel it in the steering wheel…You use your loading and unloading lights, you open the door and a student is standing there,” Raley said. “We put our drivers, three at a time, into a variety of scenarios.”

But it was especially rewarding, he noted, when he learned that a specific driving maneuver taught one day actually saved someone’s life the next day.

“The day after we got out of training, a car ran into the back of the bus going 50 miles per hour. The day before, that scenario was in the simulator. When you stop, you reset your air brake,” said Raley. “That one simulation they went through with loading and unloading probably saved two lives.”

A school bus driver from that district, Ellen Pursley, wrote a letter of gratitude from the entire Corrigan-Camden Independent School District (ISD) for saving the lives of two of their own.

“The simulator is the reason that two of our kids survived a bus crash in our district. The bus driver knew exactly what to do to keep all of the kids safe after bus simulation training,” said Pursley.

Transportation Director Joe Dives from Magnolia ISD also wrote a letter of appreciation to Raley and his training staff.

“One of many fine examples of their great work is the information in the Bus Safety 101 curriculum and the bus simulator. Before I allowed my drivers to take the three-hour (simulator) course, my entire office staff was required to try it,” he said. “The overall experience, as well as the education taken from these three hours, was priceless.”

Raley said the simulator training is so effective that many insurance companies now purchase their own simulators because the hands-on training has proven to reduce accidents. That is also why fire and police departments often use job-specific simulators to train their new officers.

“We have one simulator, but we really need three to get the training to all the districts that need it. It just takes time — and money, too,” he added. “To my knowledge, this is the only one in the state of Texas.”