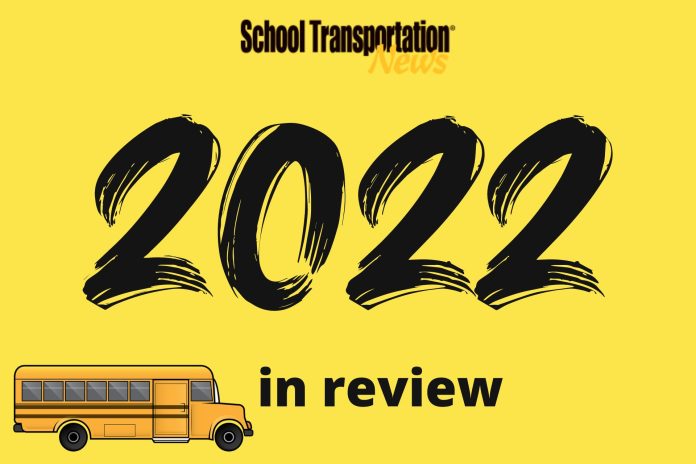 Articles relating to the school bus driver shortage and school bus crashes were among the most popular web articles consumed by readers during 2022.

However, three out of the 10 most-viewed articles reported on student injuries or negligence of bus drivers.

There were also positive news articles among the Top 10. For instance, a wire report that discussed students creating ideas to lessen the school bus driver shortage gained attention. Industry professionals are constantly looking for alternatives amid labor shortages to safely transport students to and from school.

The following countdown of news articles was compiled according to Google Analytics reports that track visitors. Let us know if you agree or not on the STN social media network.

New York City committed to going all-electric with its school buses by 2035. The first electric school buses hit the city’s streets and they pioneered a new model for transitioning their fleet. Instead of buying new buses, Logan Bus Company, one of dozens of contractors that provides transportation services for the city, is converting five older diesel buses to electric. These repowered school buses could be the first of an oncoming tidal wave of electric buses repowered diesel, gasoline or propane buses. For example, SEA Electric and Midwest Transit Equipment announced an effort to repower 10,000 buses over the next five years. If these companies succeed in converting all of these buses from diesel to electric, it would increase the number of electric school buses on the road today by a factor of 10.

School bus contractor Student Transportation of America worked with fire and police investigators in Bradford, New Hampshire, to determine the cause of a fire that broke out in a local terminal and seriously injured two employees. On March 3, the Bradford Fire/Rescue Department requested the assistance of fire agencies in surrounding towns to combat the five-alarm fire. The state’s Fire Marshal Office said the employees performed maintenance on a propane school bus the company operates for Kearsarge Regional School District when an explosion occurred at about 11 a.m. The fire marshal added that the size of the fire, lack of a nearby water supply, and limited emergency personnel hampered the ability to quickly put out the flames.

The Centers for Disease Control and Prevention (CDC) updated its COVID-19 transportation guidance stating that students no longer had to wear masks when riding U.S. school buses, a requirement that was put in place early in the pandemic. The CDC said school districts still have the discretion to require the coverings. The updated guidance replaced the CDC order that went into effect on Jan. 29, 2021, that required face masks to be worn by all people while on public transportation.

ProAir, LLC is voluntarily liquidating its air conditioning business after more than 40 years in operation. The supplier of HVAC systems to the school bus industry as well as to commercial and shuttle buses, RVs, luxury coaches, delivery vans, fire trucks, and ambulances filed for Chapter 7 protection on Nov. 16 with the federal bankruptcy court in Delaware, according to filings. A list of creditors was filed the next day seeking a summary of assets and liabilities by Nov. 30.

Students at a Chesapeake high school won $6,500 for tackling the problem of the current school bus driver shortage. Great Bridge High School students, led by teacher Paula Labbe, were named one of the two state winners in the Samsung Solve for Tomorrow contest. The students at Great Bridge worked to address how schools across the nation are faced with critical shortages of school bus drivers and created a system to help bus drivers construct personalized and efficient routes determined by the students they are transporting that day. If this project is selected as a national finalist in March, the students will win $50,000 and present their project to a panel of judges in the quest to be named national winners. That grand prize is $100,000.

A Thomaston-Upson County School District bus driver was pronounced dead following a school bus crash and two of the three students on board who were injured were transported to the hospital. The Georgia State Patrol identified the school bus driver as Sebastian Ciarca, 69. Officials say Ciarca crossed into the center line of a two-lane road and into the oncoming lane, hitting the utility truck. The school bus then drove off the road and crashed into trees. He reportedly died from injuries sustained in the crash.

A school bus driver for Flagler County Schools located in north of Daytona Beach, Florida, was released on a $500 bond after being arrested for driving with a blood-alcohol level four times above the legal limit. Mark M. McNeil, 60, was charged with driving under the influence with passengers under the age of 18, resisting arrest and child neglect. No students were injured during the incident, but the family of a female student passenger requested the child neglect charges be applied. There was an ongoing criminal investigation seeking to identify the other 39 students on the bus to determine if additional charges would be filed.

An 11-year-old student died after being run over by her school bus while she was attempting to catch it. Police in Parachute, Colorado, said Annaliese Backner was declared dead at the scene after tripping as she ran after her school bus and fell underneath the wheels as it was moving. The incident occurred around 7:30 a.m. near the bus stop. The death of the sixth grader at Grand Valley Middle School, known by friends and family as Anna, triggered state legislation that sought to install technology on school buses that alerts parents of students when buses are running late. The bill, however, failed to secure the necessary funding in the state budget.

Incorporating amber lights onto Canadian school buses can increase rider safety and decrease the number of motorists who fail to stop for students who are loading or unloading. The goal is for school buses to feature a new eight amber-red light warning system by the time they hit the road again for the new school year. The updated lighting requirements went into effect on July 1, requiring all buses manufactured on or after January 2005 to switch to the new system. However, bus companies received a grace period until Sept. 1 from the Ministry of Transportation.

The U.S. Department of Transportation and the U.S. Department of Education jointly announced that states may waive the engine compartment component of the pre-trip vehicle inspection skills testing requirement, also known as “under the hood,” for commercial driver’s license applicants seeking the school Bus (S) and Passenger endorsements (P) as well as the Intrastate only (K) restriction. The waiver is in response to COVID-19 pandemic and driver shortages. Education Secretary Miguel Cardona stated that the waiver aims to alleviate some of the labor shortages that schools are facing so that schools can remain fully open for in-person education. FMCSA Deputy Administrator Meera Joshi added that the waiver would temporarily give states the option to modify the school bus test. FMCSA later granted a two-year extension to the waiver.

Larry Minor, the associate administrator at the FMCSA, discussed upcoming proposed the upcoming rulemaking during the National Association of State Directors of Pupil Transportation Services conference in October. One of the proposed rules includes revising the commercial driver safety fitness procedures that were published in 2016. Another upcoming proposal is on Automatic Emergency Braking Systems, which is a joint rulemaking of the FMCSA and the National Highway Traffic Safety Administration (NHTSA). Rulemaking is also pending on Speed Limiters. Minor explained that the agency is now taking a carrier-based approach rather than the OEM approach used by NHTSA and FMVSA in the previous proposals. The agency is drafting a supplemental Notice of Proposed Rulemaking, which it anticipates being released in 2023.