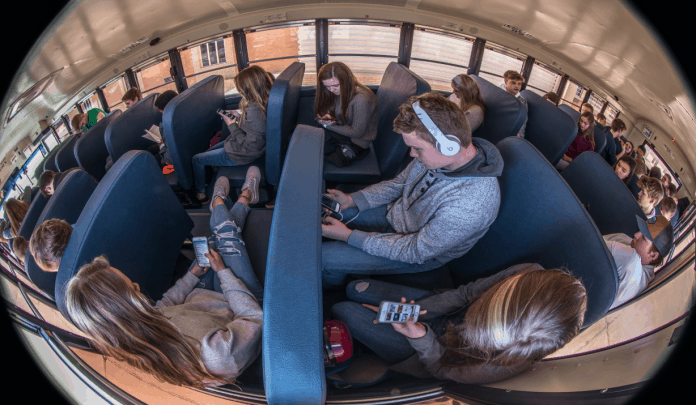 Video systems provider REI recently presented a webinar that took a brand-agnostic look at school bus surveillance and gave tips on what to look for throughout the purchasing process. Presenters advised completing thorough research, asking questions and conducting testing before settling on a bus camera system to use.

Lending his experience on the webinar was Charlie Ott, director of transportation at Fremont Unified School District in Fremont, California. The 25-year veteran of student transportation said he has up to nine cameras on some of his buses: Three on each side, one each at the front and back, and one looking out the front window. Even on a smaller bus, there could be up to five, depending on the route needs.

He has tested and used multiple camera systems on his school buses. Of the systems currently on the market, Ott said that most seem to be reliable and dependable. “The bigger issue is capturing what we need and having the quality of the video to see what’s going on,” he said. “Take a good look at technology and evaluate systems.”

Acknowledging the confusing nature of many technical terms involved in such discussions, Spencer Schiefelbein, director of business and channel development at REI, spent some time “lift(ing) the hood on surveillance.”

Ott said that common RFPs typically include DVRs (digital video recorders) that record at a high quality of 1080p and 30 frames/second per camera, on up to six channels of video. Hard drives are usually capable of storing a minimum of 30 days of video.

The term “1080p” refers to pixels on a screen, or how sharp the image is. Schiefelbein explained that 1080p on a smaller screen may work fine, but when bigger screens are in use, the image is distorted and looks blurry.

He then showed a slide demonstrating that even 1080p videos are not equal in terms of quality. One video may allow transportation staff to zoom in and read what’s on a student’s phone if needed, while another may be too blurry to show if a student is tearing up a bus seat.

Bit rate is the speed at which data is processed by the camera and DVR. Ott advised making sure the vendor under consideration is able to answer questions about the bit rate, to ensure that it is high enough to avoid poor quality video. In addition, a high-quality processor is needed to deal with the video coming in, Schiefelbein explained.

Multiple channels may also result in a video of lower quality, so the number of school bus cameras in use must be considered when deciding on the needed software.

Wide dynamic range, which refers to the images captured by the camera, is “very important,” Schiefelbein said. The video processing chip in the camera combines the images with different exposures into one image for the staff to view. Lower quality chips or lenses make a difference in the resulting video quality. Sony IMAX chips are reputed to be the best for the industry, he added.

Fisheye lenses allow transportation staff to see more of the bus interior. Schiefelbein advised asking for specifics on the height and width of the screen that is actually visible.

When inspecting products personally, such as at an STN EXPO trade show, Ott advised looking beyond the similar-looking boxes that are offered by many vendors. Schiefelbein encouraged asking questions about the specifications and engineering behind the product.

Are they using aircraft aluminum rather than steel? Are heat and evaporation concerns taken into consideration? Is vibration considered? The supplier should have a good knowledge of its product, so that the company can explain these elements.

Which one you use, said Schiefelbein, depends on your individual operation’s needs. Making the right choice “really comes down to understanding the technology and how it’s designed.” He recommended buyers ask what the supplier did to test the drive being considered, including with different terrains and heat conditions.

“If we could spend all the money in the world in school transportation, we might not be on this call, but we have a limited budget. To get the best we can for the amount of money we can spend, we are reliant on our distributors to be doing these things,” observed Ott.

Schiefelbein noted that suppliers should have the tools to help you pick the best system, based on your operation’s needs. For instance, REI offers an online calculator that accepts inputs of different school bus camera configurations—including a number of cameras, storage capacity, number of hours in use per day and more. It then estimates the average number of recording hours that the system would offer.

To maximize coverage of the bus interior, as well as storage, Schiefelbein recommended dual-stream recording. This captures multiple video streams, some at a higher quality and others at a lower quality. This then results in more recording time, or allows more than one video viewpoints. This can come in handy in getting to the bottom of incidents like bullying situations.

The frame rate is measured in frames per second, or fps. While a common misconception is that you must have a higher fps for acceptable video quality, Schiefelbein said that lower rates like 15 fps still achieve a “happy medium” between quality and maximizing storage space.

Ott confirmed this, saying that with his video set at 15 FPS, he gets “a lot more storage and the quality is just as good.”

Thinking About the Future

Ott cautioned that poor-quality installation sometimes negatively affects not only the video system, but sometimes damages the school bus itself. He proposed asking the supplier to install it on its own dime, to prove that the company is confident in how well its product works.

“Make sure you’re not buying something simply because of relationships,” Ott counseled. “Make sure that you are testing the product—that you’re actually putting it in one of your buses.”

“Make sure that manufacturer has answers,” Schiefelbein advised, “And if it doesn’t, or if it takes them three weeks to respond to you, maybe they’re not the right company to go with.”