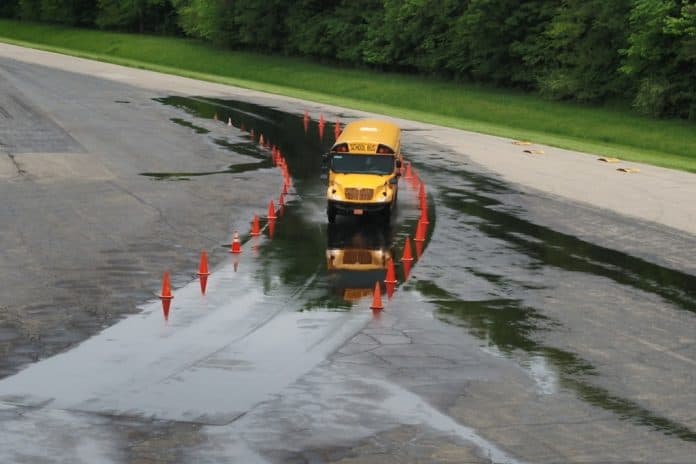 NBC national investigative correspondent Jeff Rossen met with IC Bus representatives at a test track for the segment, which aired Thursday morning. He said school bus safety, a personal issue most people with school-aged children, is especially personal for him, because his two daughters were involved in a school bus crash earlier this year. The crash resulted in no injuries, but Rossen said not all crashes are that lucky.

On-board computer systems developed by IC Bus and partner Bendix Commercial Vehicle Solutions stabilize the bus wheels and drivetrain in adverse road conditions and essentially senses danger and takes control of the bus automatically. With recent school bus crashes, resulting in many injuries and a death, this new technology is said to “save kid’s lives,” Rossen explained.

Viewers rode along with Rossen and Trish Reed, vice president and general manager of IC Bus, as a school bus navigated a wet roadway with and without the electronic stability control system activated and to test new automatic emergency braking. Both features were announced at the STN EXPO in Reno this summer.

The Today show provided views of the simulation from multiple cameras, as well as a drone. Held on a closed track, away from traffic, IC employees recreated the situations that school bus drivers could face and the video shows the difference between using the technology and not.

The other stimulation was to test the collision mitigation technology. To accomplish this, IC Bus parked a car in the middle of the track to simulate a traffic jam and instructed the bus driver to hit the gas.

The computer automatically applied the brakes and brought the bus to a complete stop nearly a full bus length in front of the parked car. This technology is being implemented to reduce the number of crashes that occur due to distractions or medical conditions occurring behind the wheel.

“Experts still say the school bus is the safest way to get your kids to and from school, this technology makes it even safer—obviously,” Rossen said at the conclusion of the segment.

IC Bus, according to the segment, is the country’s largest school bus maker and transports nearly two-thirds of U.S. children to school every day. The company said the new technology will eventually be standard in all new school buses built.