CDC Encourages Safety Precautions for a Safe Reopening of Schools 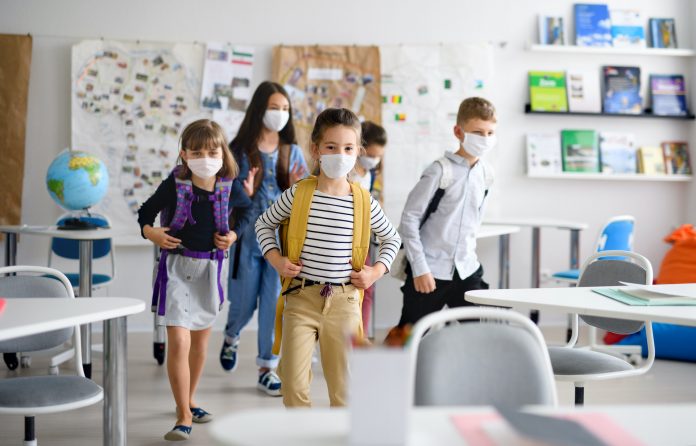 Ten months into the novel coronavirus pandemic and still some schools nationwide have yet to return to in-person learning, despite classrooms and district buildings not contributing to outbreaks. The Centers for Disease Control and Prevention (CDC) said on Tuesday that it’s time schools reopen.

An article published by the CDC on the Jama Network writes that research indicates minimal virus spread is present in schools, as long as adequate safety procedures are in place.

School shutdowns that began nationwide last March were originally anticipated to last only two weeks, maybe a month in some areas. But researchers Margaret Honein, Ph.D., Lisa Barrios, DRPH, and Dr. John Brooks write that by this past fall, a quarter of the 13,597 districts that provided school reopening plans remained fully online.

Another 51 percent were using a hybrid model of education, where students attend in-person classes for a couple of days a week and remain at home for online learning the remaining days. Meanwhile, only 17 percent were fully open for in-person instruction, though some districts included options for parents to opt-out.

The paper states that as positive COVID-19 cases continued to rise throughout 2020, rapid and widespread SARS-CoV-2 transmission was prevalent in long-term care facilities, correctional facilities, and high-density occupational settings, like meat and poultry processing plants. As schools started to plan for fall, many state departments of education published return to learn guidance. Yet the uncertainty of the risk of virus transmission in school settings and onboard the school bus were certainly present. The researchers did not specifically reference school transportation in the article.

The paper relays that as many schools have reopened for in-person instruction, there has been little evidence reported that schools contribute to the increased community spread of COVID-19. “A case-control study of exposures among children aged zero through 18 years with and without SARS-CoV-2 infection in Mississippi found that having attended gatherings and social functions outside the home as well as having had visitors in the home was associated with increased risk of infection; however, in-person school attendance during the 14 days prior to diagnosis was not,” the research study stated.

The research appears to contradict comments made by President Joe Biden during the presidential debates in October. As Education Week reported, he mocked former President Donald Trump’s assertions that schools were not super-spreader sites. But then-candidate Biden said schools needed more resources. Since taking the Oval Office, he has proposed doubling the federal relief funds available for reopening public schools. Talks on the American Rescue Plan have begun in Congress.

Meanwhile, the CDC article outlines several other examples in which in-person learning did not contribute to the community spread. For instance, schools in North Carolina and Wisconsin have reported minimal cases in schools. The European Centre for Disease Prevention and Control also reported a similar finding.

While one study reported large outbreaks in schools in Israel, the spread was attributed to crowded classrooms with no social distancing in place, face masks exemptions and one continuous air conditioning that recycled interior air in closed rooms during a heatwave. A South Korean study determined last summer that a super-spreader event occurred when an infected diner sat beneath an air conditioning vent in an indoor restaurant.

The research advised that in order to reopen schools safely, preventing the transmission in school settings and the community is paramount. It recommends closing all indoor dining at restaurants as well as continuing mitigation measures in schools, including universal facemask usage, increased physical distancing, and hybrid attendance models when needed to limit the total number of students and prevent crowding.

It also recommends increasing air ventilation in classrooms and expanding testing to identify and isolate asymptomatic infected individuals. Staff and students should also have the option to continue online education, particularly those with an increased risk of severe illness or death if infected with SARS-CoV-2.

While the classroom setting itself doesn’t indicate a high spread of COVID-19, some school-related activities have increased the risk, the researchers report. Close contact during high school athletic team practices and competition and large school gatherings associated with team sports increase the risk. The researchers stated that 51 percent of districts had students participating in school sports programs.

In conclusion, the CDC indicates that decisions made today can help ensure the safe operation of schools and provide critical services to children and adolescents in the U.S., though some of these decisions may be difficult. The paper recommends restricting indoor dining at restaurants and to postpone school-related activities that can increase the risk of in school transmission, including indoor sports practice and/or competition.

With the distribution of two vaccines under the Emergency Use Authorizations and more vaccine options anticipated, “There is much hope on the horizon for a safer environment for schools and school-related activities during the 2021-2021 school year,” the research paper says.

Meanwhile, Biden also signed an Executive Order on Jan. 21, “Supporting the Reopening and Continuing Operation of Schools & Early Childhood Education Providers.” As previously reported by STN, the order directs the U.S. Department of Education and U.S. Health and Human Services to collaboratively provide guidance on the safe reopening and operating of schools as well as developing a best practices clearinghouse for safer schools and campuses.

The National Association for Pupil Transportation reminded industry professionals via email on Tuesday, that the order does not indicate a requirement to open schools within the next 100 days. While it is Biden’s goal to have all schools open within 100 days, he does not have the authority to mandate it.

“There will be federal actions to encourage schools to open when appropriate but ultimately your state and local officials, particularly your school board and local administrators, will be making the many decisions about when and how to open your schools,” the NAPT stated.