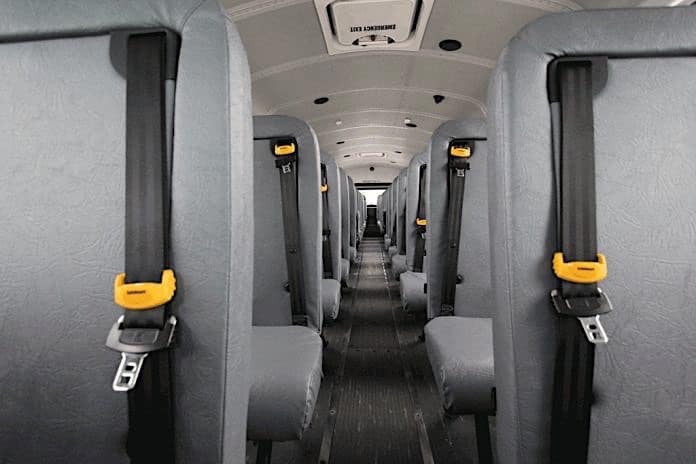 In a January 2003 letter to NHTSA on school bus passenger crash safety, NAPT asked the agency to study “safety systems” that “will definitively enhance the current passenger crash protection for all children that ride a school bus.” NHTSA did publish a final revised rule on FMVSS 222, “School Bus Passenger Seating and Crash Protection,” in October 2008, but stopped short of requiring lap-shoulder seat belts for large school buses. It did, however, require the three-point restraints for small Type-A school buses under 10,000 pounds GVWR, as those vehicles undergo crash forces that are most similar to those in passenger vehicles.

Michael Martin, NAPT’s executive director and CEO, clarified to School Transportation News on Friday, that the term safety systems, has and continues to include “any kind of seat belts.”

“… [W]e mean the same thing now that we meant 15 years ago, although we do support the installation of both ESC and ABS on school buses,” he added.

NTSB made a reiterative call to states for lap-shoulder seat belts as school bus design enhancements on Tuesday, when publishing its final investigative reports into the November 2016 fatal crashes in Baltimore and Chattanooga. But NTSB did not recommend compartmentalization enhancements to NHTSA. Instead, they asked NHTSA to require all new school buses to be equipped with collision avoidance systems and automatic emergency braking technologies. Martin said NAPT was disappointed NTSB failed to ask NHTSA to clarify confusion on the matter, as the agency has made past statements that lap-shoulder belt implementation could only save an average of two lives a year, and most recently, that all school buses should be equipped with the occupant restraints, which the current administration has since shied away from.

“Regardless of what NTSB has said to the states, we still want NHTSA to address the difference between what their former Administrator Mark Rosekind said and what the official public record states, to provide an effectiveness number for belts in buses (just like they do for cars and trucks and for Electronic Stability Control) and to advise everyone what effect lap/shoulder belts will have on emergency evacuation,’” he told STN. “We have been asking for these three things for a long time.’”

Martin also said earlier this week in the NAPT Dispatch that he addressed a recent letter to NTSB Chair Robert Sumwalt and encouraged him to follow through on a perspective shared by Dr. Kristin Poland, NTSB’s deputy director of the Office of Highway Safety, in the May issue of School Transportation News magazine. In her article for STN, Poland discussed lessons learned from a 2014 high-speed crash of an SUV and a school bus that was not equipped with lap-shoulder belts, that was transporting a high school baseball team. While none of the student-athletes suffered life-threatening injuries, several students later experienced concussion symptoms, some of which lasted for months, as a result of the crash impact.

“[Poland] notes, ‘While the school bus protected its occupants from life-threatening injuries in this severe high-speed crash, perhaps future school bus design should account for ‘minor’ injuries, like concussions, that can cause significant challenges not just for athletes but all student passengers.’” Martin wrote. “Poland’s article also says, ‘A better understanding of the risks associated with concussion injuries may enable a different approach to the discussion of school bus occupant protection.’”

Martin said that he is encouraged by Poland’s new interest in compartmentalization, which he added has likely been NHTSA’s most successful approach to passenger crash protection. NAPT said Martin also believes, as Poland does, that it “may enable a different,” and hopefully, a broader conversation about how to best protect children riding in school buses.

“For the last 15 years we have asked NHTSA to rethink the parameters of compartmentalization,” Martin said. “We are encouraged by Dr. Poland’s thinking and sincerely hope Chairman Sumwalt will lead NTSB in that direction.”

Former NTSB Chairman Christopher Hart has attended the NAPT Summit and the National Association of State Directors of Pupil Transportation Services annual conference for the past several years. He reiterated at the Nov. 2016 meeting that lap-shoulder belts are the most effective way to enhance school bus compartmentalization, or the protection afforded to students with high-backed and cushioned seats.

NTSB research into other fatal school bus crashes, as well as school bus crash tests performed by IMMI, the manufacturer of the SafeGuard brand of school bus seats and seat belts, have shown compartmentalization works best in frontal and rear impact crashes. However, students often are thrown from this seating compartment during side impacts and rollovers, thereby becoming human projectiles.

He explained that NHTSA has not supported mandated three-point seat belts, because the cost-benefit analysis doesn’t support their addition when a school bus accident is deemed “unsurvivable.”

“Congress could mandate it but I don’t see that happening,” Hart added.

However, as Martin pointed out, NTSB could still recommend to NHTSA to upgrade its compartmentalization standard. “If NTSB would simply make a recommendation to this effect to NHTSA, then the agency would at least have to consider it,” he added.

While NTSB did not direct lap-shoulder belt recommendations to NHTSA with its Baltimore and Chattanooga final report on Tuesday, it did urge the four states with current laws requiring two-point lap belts—Florida, Louisiana, New Jersey and New York—and the 42 states as well as D.C. and Puerto Rico that have no school bus seat belt laws in place, to upgrade to lap-shoulder belts. Such a move has been supported by NAPT, as well as the National School Transportation Association, dating back to NHTSA’s 2011 denial of a petition led by the Center for Auto Safety to mandate three-point seat belts in school buses. But NAPT has also called on NHTSA, as recently as 2016, to also address the “Danger Zone” around school buses, where more students on average are killed when loading and unloading, than on the bus in crashes.

California. was the first state to pass a law requiring lap-shoulder belts on all school buses—both large and small—in 2004 and 2005, respectively. Texas followed with a law in 2010, but similar to Louisiana, it required funding from the state legislature be appropriated to force school district compliance. Texas did pass and enact a new law last year requiring a public school meeting on implementing lap-shoulder restraints and disclosure if funding is not available to proceed.

Likewise, Arkansas. passed a law last year requiring a special levy be added to local ballots if 10 percent of school board constituents signed a petition seeking lap-shoulder belts on buses. And Nev. passed a law requiring the three-point seat belts on all newly purchased school buses as of July 1, 2019.

In Tennessee, where lap-shoulder belts have been a particular hot issue since the Nov. 21, 2016 Chattanooga school bus crash that killed six students, the state legislature this spring passed a budget amendment from Gov. Bill Haslam to make $3 million available over the next fiscal year to assist school districts in implementing the occupant restraints. A spokesman for the Tennessee Department of Education told STN on Thursday that the it will contact school districts by this summer to gauge interest in participating in the grant program. At that point, the Department of Education will finalize the requirements and seek official submissions later this year, he added.