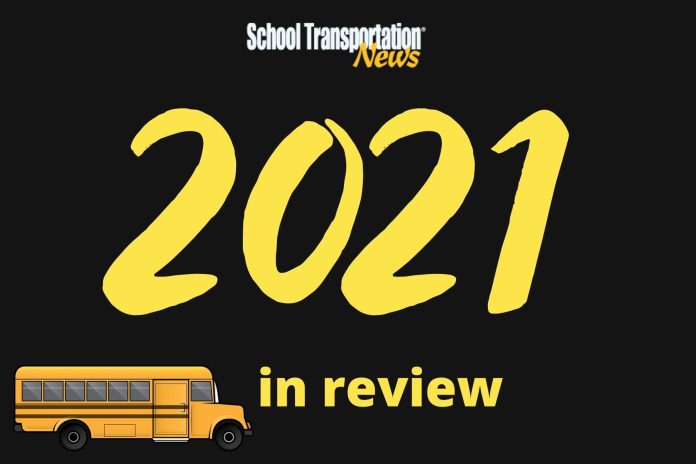 As the editors at School Transportation News look back at events that occurred in 2021, articles relating to driver shortages and school bus safety were among the most popular STN magazine articles.

However, this year three out of the top 10 magazine articles reported on the importance and advancements of electric buses, a topic that certainly flourished this year, especially since the federal government dedicated an unprecedented amount of funding toward the purchase of no and low emission vehicles.

We rounded out the year by recognizing Garage Stars (August), Technology Super Users (September), Rising Superstars (October) and of course STN’s Transportation Director of the Year (November.) If you haven’t already, take some time to read up on these outstanding and upcoming individuals.

Driver shortages continue nationwide and school bus crashes occur due to a myriad of reasons. Professionals continue to look for alternatives like electric school buses, and increased pay while continuing to promote school bus safety.

We are thankful for the hard-working professionals that dedicated their time and appreciation to this industry.

The following news articles are ranked in order of popularity, and indicate the date of publishing and reader’s views, according to Google Analytics reports.

Despite school buses remaining parked for a majority of the 2020-2021 school year nationwide, the unsung heroes in the shop still woke up every morning to ensure the school buses were in working order, to prepare for when they did return to the road. The Garage Stars, which recognized 10 maintenance professionals included Stephanie Foster, who is in her eighth year in pupil transportation as the shop assistant at Pell City Schools in Alabama. She is the second woman in the state to obtain her school bus mechanic certification.

In this article First Student announced its partnership with NextEra Energy in order to provide electric buses that are beneficial for both students and the environment. NextEra Energy is the largest renewable energy company in the world. It has the capability for deployment of electric fleets, complementing First Student well since the company is experts in student transportation. By coming together, they can bring the best of both worlds, operation, safety and maintenance along with renewable energy.

Throughout the middle of the pandemic many school districts did not need as many drivers to transport students to and from school since classes were mostly remote or hybrid, resulting in some districts or companies laying off their workforce. However, as in-person learning began again many districts were faced with a larger driver shortage than they already had before the pandemic started. Drivers quit their job or retired amid vaccination requirements, unequal pay, and many other reasons.

7. It’s Not Only About the Pay. Published February.

When it comes to transportation operations, mechanics are often the key that holds school bus operations together. In this article, one mechanic that wished to remain anonymous confided in STN that despite his $27 hourly pay, he is being paid the same or less than a district janitorial staff. That fact does not sit still with him. While he explained his direct supervisor values his position and equitably shares the garage responsibilities, the mechanic feels that his school district would eliminate his position first in response to widescale budget cuts.

In this article STN received an overlook of basic staff necessities when planning new facilities, that could cause operations to miss the bus. One topic that was mostly emphasized was the importance of access to restrooms, as many times staff members are older. The article also discussed how important the workplace is in terms of staff having the necessary space to work without the need to cram all together in a small office. Transportation director Michael McClure advocated in the article for creating comforts for staff and shares the difference these comforts can make in staff morale.

With a new presidential administration in place and the COVID-19 pandemic continuing to rage with multiple variants, school districts are facing many decisions and changes. This article focuses on some of the changes that will be made, such as updating one’s fleet of school buses. Some school districts are considering several key factors when purchasing a new bus, mainly maintenance needs and cost of diesel engines. Meanwhile, electric buses certainly have gained attention, as President Joe Biden has signaled his interest in electrifying school buses nationwide. School districts reticent to embrace electric often cite the upfront cost, which can be three times that of a comparable diesel bus. Manufacturers are also increasingly recommending that school districts buy new purpose-built electric buses rather than existing vehicles.

Schools continue to be challenged by disinfecting buses and facilities as they learn from the use of chemicals and discover new ventilation technologies. Amid the global pandemic and sometimes contentious public debate, some schools are re-opening, while at this writing other districts defaulted to remote and hybrid learning models. Transportation staff continues to clean and disinfect bus surfaces, with some challenges arising, while fleet directors are considering air purification technologies as funds become available.

3. The Path to Success. Published October.

This article introduces STN Rising Star Rick Walterscheid, who has been on a lifelong path to serve his local community through school transportation. He often shares stories of his past and career path with colleagues to build camaraderie and motivate them to achieve their personal best. As senior director of transportation and special projects for Texas School District he helped with the purchase of 280 new diesel school buses, built a state-of-the art transportation facility, implemented new technology and hired and retained a 320- person staff, including 200 full-time drivers. Read about him and the other nine Rising Stars in October.

School districts expand the use case of Wi-Fi hotspots on school buses, even as 5G ushers in the promise of even greater connectivity. As virtual learning commenced the 2020-2021 school year in Santa Ana, California, after the COVID-19 pandemic, dozens of calls each week complaining of difficulties with virtual learning occurred. More specifically, over 50 percent of the calls were about poor wireless connectivity, which is essential to holding remote classes. Local contractor JFK Transportation responded by sending bus drivers in school vans, equipped with 5G Wi-Fi hotspots into the community. This is an example of only one district who utilized the capabilities of Wi-Fi hotspots on school buses to help bridge the digital divide.

Alternative fuel and energy buses are gaining popularity among private contractors, with propane retaining the strong position even as electrification development ramps up. As the case for electric school buses continues to be developed, propane has emerged as the clear alternative fuel of choice among private contractors in their campaign to reduce their collective carbon footprint on the world’s environmental future.