After doing their research and hearing first-hand accounts of the effectiveness of propane as a school bus fuel, two transportation directors shared during a recent webinar how they implemented the fuel to great success in their district fleets.

Currently, there are 20,000 propane-powered school buses on the road in the U.S. All three major bus manufacturers – Blue Bird, IC Bus, and Thomas Built Buses – offer this school bus option. The cost of propane has also been consistently lower than diesel or gasoline, thanks in part to federal rebates and incentives.

Whaley stated that most districts start with one small fueling station, although the infrastructure is “extremely scalable.” Propane is also highly accessible. When the efforts required to create electric energy are considered, propane is cleaner than that power source as well, he added.

“I really believe in the savings and the value of the product,” Lake said.

The process, he said, starts with doing research and gathering information from student transporters who are already running propane buses. After looking at the data, he determined that propane was the best way for his district to get students to and from school as safely and efficiently as possible.

When purchasing propane buses, Lake shared that he highlights the savings and health benefits to help convince the district administration, the school board and community members to purchase more propane buses. During the early phases of adoption, he even had to correct misconceptions – fueled, he said, by depictions in Hollywood movies – that propane fuel tanks might explode.

Lake was also aided by Blue Bird and ROUSH CleanTech, who together produce the Blue Bird Vision fueled by propane autogas. 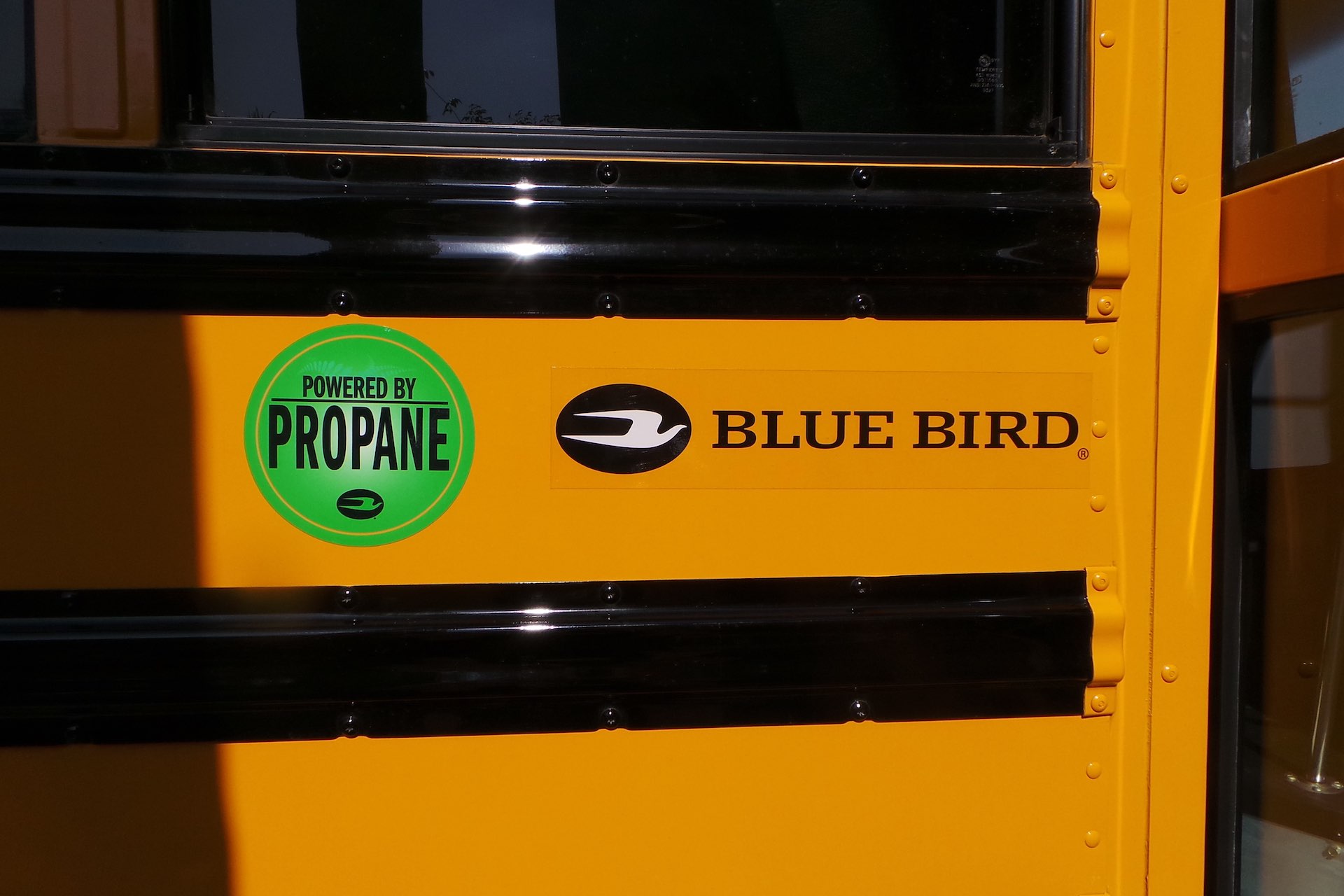 The infrastructure was not a complicated project for Southwest Allen County Schools, either. Lake worked with his local propane supplier to create a mutually beneficial solution. Grants come and go depending on the politics, so the district is trying to move away from relying on them, Lake said. He recommended using grants to start the process if needed, but he added that propane autogas is fairly easy to implement because of fewer infrastructure costs than with CNG or electric.

His bus garage appreciates the propane buses, too, Lake said, because the mechanics compared their propane buses with their diesel buses and found the former easier to work with. Propane buses also require less maintenance.

Lake said his drivers appreciated the quieter engines and the handling of the new propane vehicles. In Indiana’s cold weather, propane does not require the warm-up time that diesel buses do, a feature that the drivers also enjoy, he added. While propane fueling takes a little longer, he said, any drawbacks are minor compared to the benefits.

Sam Ham recently came out of retirement to serve as interim senior executive director of transportation for Cobb County School District, the second-largest school district in the state of Georgia.

He noted that transportation departments often run diesel buses because that’s what they’ve always done and that’s the fuel bus drivers and mechanics are used to. But he urges directors to think outside the box.

He related that he wasn’t convinced on the idea of propane buses when he first heard about its resurgence during a 2015 Council of the Great City Schools workshop. But he said he came around when users from around the U.S. sang the fuel’s praises after the presentation.

“I was just astounded at what I heard,” Ham recalled.

Fulton County Schools located south of Atlanta, where he was working at the time, was an almost exclusive diesel fleet of 934 buses. Ham did his research and worked with AmeriGas to install fueling infrastructure. The first year of his journey at Fulton County, he was able to purchase 90 propane buses, the largest such purchase in Georgia. The positive media coverage made district administration happy and Ham’s life easier, he explained.

Soon after, the district was faced with a budget crunch but searched for federal and state grants, such as the Diesel Emissions Reduction Act (DERA), to use. This way, Fulton County was able to purchase more propane buses.

He reported savings of $3,000 per bus. The insightful way that Ham and his team leveraged grants freed up money and allowed his district to raise school bus driver salaries, effectively combating the driver shortage plaguing 90 percent of districts across the country. Fulton County Schools offered $20 an hour, the highest driver salary in Georgia in 2019, which filled all of the department’s vacancies.

“Propane is just the gift that keeps on giving,” Ham commented.

Webinar attendees asked questions about the cost of propane compared to diesel. Ham stated that diesel gave more miles per gallon, but propane cost him less per gallon. Lake added that the savings in maintenance costs and labor, as well as the environmental responsibility and student health benefits, should not be overlooked.

“But when you look at what it takes to fuel those buses to travel those same miles, that cost per mile reduction is the bottom line,” Whaley at PERC stressed.

Meanwhile, Lake said he equipped his buses with the largest propane tanks available, and his drivers still have been able to complete a round trip of five hours without having to refuel.