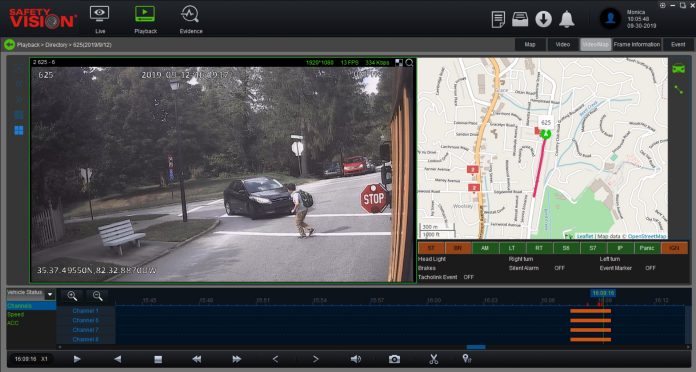 Frank Bowden, an account executive with video company Safety Vision, explained in a June 9 webinar that transportation directors should learn the nuances of state and local rules, as that may be more than some local lawyers may know.

Rodney Hardy, director of transportation for Surry County Schools in North Carolina, agreed that an understanding of state laws is essential. For example, his state requires three exterior camera views.

“If we could put a bubble around the bus, that’s what we would do, but unfortunately we can’t,” Hardy said. “So, bus cameras [are] actually one of our tools to mitigate or eliminate stop arm violations.”

In his experience it works, he added, since in his 15 years on the job he has yet to see a repeat offender.

Bowden reviewed the laws in several states, which are similar to each other. Still, there can be important differences. Some require law enforcement to review video evidence, while others only mandate that vehicles have a rear license plate, which can hamper video enforcement. Not all states require traffic traveling in the opposite direction of a school bus to stop.

Safety Vision takes a “best-in-class” approach, so its camera offerings capture good resolution images across three lanes of traffic. Bowden explained that most applications require three cameras. For larger highways with four or more lanes, an additional camera may be needed. Proper camera placement allows clear views, he added, so cameras should be mounted on the front, side and rear of the bus. Safety Vision’s Foresight Pro software, for example, also offers zoom and frame-by-frame view.

The cameras aren’t just recording images, they’re also collecting essential metadata and safely compressing all the evidence. This then needs to be retrieved for follow-up. Clint Bryer, Safety Vision’s director of sales and pupil transportation, explained that districts can customize how long video is saved.

Hardy highly recommended cameras with Wi-Fi upload capabilities, as he said they save the time and hassle of going to retrieve a hard drive from a school.

Expediting data retrieval is a focus of Safety Vision. Manual markers may be added, such as a driver pushing a panic button to mark an incidence of student behavior. Illegal passing incidents are automatically flagged with “Stop Arm Pass” indicators. Transportation staff can then make a data file to save the incident online. These evidence records are searchable but guarded and log every viewer, Bowden further explained.

The next step is to share the illegal passing incident with law enforcement. Safety Vision’s transparent data shows that the proper chain of command has been followed, a feature that Hardy said he appreciates. The evidence can be easily exported into a printable report.

Safety is a community issue, Bowden commented. Signs may be necessary, he added, to engage the community and remind the general public that it’s unlawful to pass stopped buses. These signs are especially helpful on hairpin turns, which could be frequent trouble spots, Hardy shared.

Additionally, stop-arm cameras can help transportation directors verify that their school bus drivers are following all the rules. For example, the camera on the back of the bus can verify whether the stop-arm and flashing lights were correctly deployed during a student pick-up or drop-off.

The cameras record all stops, even if the stop-arm isn’t out. This is useful for school bus driver training purposes. However, Hardy related that some stop-arm violations captured on camera could not be forwarded to law enforcement because the bus had not yet stopped moving.

The data can also be used to improve operations. If a bus stop sees a lot of passing violations, consider moving it, Bowden suggested.

Bryer added that the cameras also capture multiple angles of other incidents such as collisions. He and Bowden recounted times when Safety Vision stop-arm cameras recorded such incidents and provided the school district with the proof to back up the school bus driver’s account. Hardy further explained that stop-arm video has helped resolve incidents in which the school bus wasn’t even involved.

In the 10 years Safety Vision has worked with Surrey County Schools, there have been changes in how illegal passing is prosecuted.

“Having video on a school bus is critical for the enforcement piece here in North Carolina,” Hardy declared.

Cameras won’t solve all your problems, however. Training is key, and Hardy said he is “more than happy” with the training that Safety Vision has provided.

With new district budgets expected soon, Safety Vision said it offers flexible ways to implement new safety technology onto buses. Even if the initial purchase includes a smaller number of camera channels, Bryer recommended purchasing a system that can accommodate four to eight cameras, so that expansion is possible.

Do your homework, see the product if possible, and develop relationships with vendors, Hardy advised. Don’t just accept the lowest bid, but the one that also meets district specs.