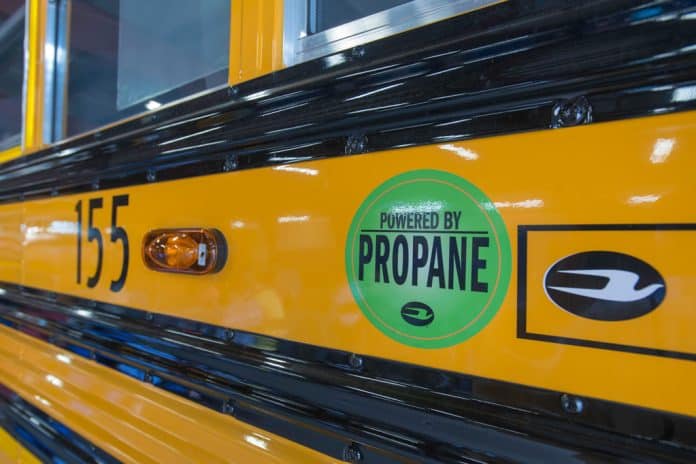 As the federal Clean School Bus Program makes separate $2.5 billion pots of money available over five years for zero- and low-emissions buses, respectively, proponents of propane school buses are encouraging their colleagues to use the funding for a tried-and-true solution.

Propane advocates say that alternative fuel delivers public health and environmental benefits like – if not quite as robust as – electric, but at a much lower cost and with less infrastructure and training investment needed.

“Unprecedented is such an understatement when we talk about the funding for school districts that this Infrastructure Act is creating to replace diesel buses,” said Stephen Whaley, director of autogas business development for the Propane Education and Research Council. He noted that the new funding dwarfs that for alternative fuel buses made available by the 2008 American Recovery and Reinvestment Act, which itself did much to promote propane vehicles.

He noted that in the decade since propane school buses hit the market, there are now about 22,000 on the nation’s roads. Given the approximate cost of a propane bus, the unprecedented federal funding could provide up to 10,000 more propane-fueled school buses a year for the next five years. “It’s mind-boggling,” he said.

Propane buses make up almost one-third of the fleet at Newport News Public Schools in Virginia. The district has 104 propane buses, with 21 more scheduled for delivery soon, said Transportation Director Shay Coates. He added that the district received its first propane buses five years ago, and he hopes to transition the entire fleet to propane as soon as possible.

“We love them, I haven’t ordered anything else since,” Coates said. “With the diesel we get a lot of check-engine lights, fluid changes, oil changes. And for our community, we live in a very urban dense area with a lot of traffic, so this is contributing to making things better in our city.”

He added that propane buses are also “much easier to work on for our mechanics – they really took to it quickly. For the drivers, it’s a quiet drive. Kids don’t have to scream over the sound of the diesel engine, and it gives the driver a little peace of mind, being able to hear things around them,” he continued.

Meanwhile, Kayne Smith, the director of transportation at Cypress-Fairbanks Independent School District near Houston, has the largest propane fleet in Texas with 336 propane buses, about one-quarter of the total fleet. Another 80 propane buses have been ordered thanks in part to a state grant, and Smith added he is likely to tap federal Clean School Bus funds for future purchases.

“There’s always skepticism when you change over from something everyone has been so accustomed to,” said Smith, who was School Transportation News 2021 Director of the Year. “But through education and having the drivers involved, letting them know this is a clean, safe proven fuel source, the drivers have really come to love the bus, just how smooth, quiet and clean they are.”

There are multiple fueling options for propane buses, Whaley explained. Vendors can deliver propane by tanker truck for direct fueling of buses, or vendors can deliver fuel to temporary and transportable or larger and permanent above-ground tanks on school facility grounds.

When districts adopt propane buses, they often begin with small tanks transported around facilities on skids. As the fleet grows, they typically add on-site stationary propane tanks, often ranging in size from 1,000 gallons to 18,000 gallons.

“A starter kit stationary tank, a small private station, might be $40,000 in equipment that will fill up 10 buses every day, no problem,” said Whaley. “When you go to 20 buses, you don’t have to buy anything new. You just put an extra storage tank behind it. If you get more buses, you get larger tanks, but the dispensers are exactly the same.”

Coates’ district has an 18,000-gallon tank that he described “looks like a missile.” He and other directors often lease the tanks from fuel vendors, relieving them of the obligation to dispose of the tanks when they are outdated. Fuel vendors often provide tanks and delivery free or at low cost as part of a fuel contract.

“Fuel marketers love coming by with their bobtail and filling up buses for folks to try it out because they want to provide the infrastructure and fuel,” said Whaley. “I don’t know of many school districts that actually pay for their infrastructure. The people who sell propane, want to give [infrastructure] to you so they can put their fuel in it.”

At this report there were more than 2,600 public propane fueling stations nationwide, Whaley noted, which can help when buses are traveling far afield.

Amy Rosa, transportation director at Wa-Nee Community Schools in northern Indiana, has 11 Blue Bird buses with ROUSH propane autogas systems. Four more are on the way and another four are being built. The district’s fuel provider installed the fueling tank and Wa-Nee was responsible for the concrete slab and electric and internet connection.

Like many tanks, Rosa said the district’s is digitally wired to let the provider know when fuel is low. She estimates that the propane buses provide a fuel savings of about 30 percent when compared to diesel. Plus, she added that electric buses consume extra electricity quickly to heat up or cool down during extreme temperatures, and propane buses don’t have this problem.

“In northern Indiana, it’s pretty cold. Our drivers are really happy with how well the buses start and how quickly they get warm,” she said. “This has been an incredible transition for us.”

John Aymil, the transportation director of Randolph Township School District in New Jersey, has 32 propane buses and is planning to convert the whole fleet to propane. Federal funds may be especially helpful since New Jersey doesn’t use Volkswagen settlement funds for propane school buses.

“The propane buses are quieter than a diesel or gas bus,” Aymil noted. “They don’t need to be warmed up in cold weather and New Jersey does not check emissions [on the buses] because they burn so clean. The drivers enjoy not having to smell the diesel fumes.”

Propane buses are not as expensive as electric, either, and are easier for districts to afford with or without grant funding, especially considering the fuel and maintenance savings compared to diesel over time. Meanwhile, the Clean School Bus Program means significant funds will be available for the next five years, not to mention grants also potentially available from states’ Volkswagen settlement programs, Diesel Emissions Reduction Act rebates, and other state and federal clean fuel and emissions reduction programs.

“I’m always preaching to the districts in our region,” Coates said about the benefits of propane, noting that while his district has Virginia’s largest propane fleet, at least two other nearby districts also have propane buses. “There’s so much money out there for electric, but there’s also a lot of money out there for propane and a lot of it isn’t used. There is room for people to get in there and get funds for their propane buses.”

Whaley emphasized that propane will remain a cost-effective solution after the Clean School Bus Program concludes in fiscal year 2026. Whaley said with propane buses costing about one-sixth the total amount of electric buses, he sees it as a better option for transitioning diesel fleets.

“On the environmental justice side, we can displace 96 percent of the local toxic tailpipe emissions for the smallest amount of incremental cost,” he said. “It’s all about how many diesel buses can I displace. It has to be a solution that can work without funding after [the Clean School Bus Program] is done.”