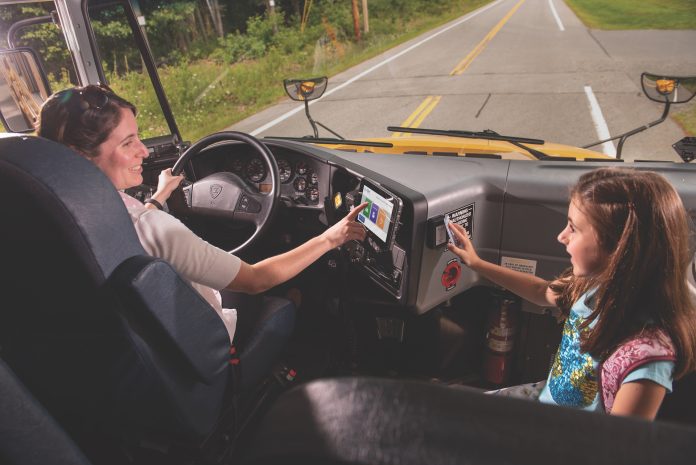 What was thought to be the start of a trend toward standardizing factory installations of tablets on school buses may instead remain an aftermarket option. That’s because some technology providers are concerned that such a move could challenge their efforts to maintain their individual identities while trying to take some weight off the shoulders of their school district and contractor bus company clients.

Tablets or mobile data terminals, technology that is traditionally supplied to OEMs by third party technology companies, which march to the innovative beat of their own drums as they hone a competitive edge over the field, can perform several functions depending upon their programming. The tablets can be used by drivers to clock in and out, perform pre- and post-trip inspections, receive turn-by-turn route navigation, confirm and track student riders, perform GPS functions, coordinate telematics information, and allow parents to track the school bus through a special app. MDTs also include Android phones and laptops that can be mounted or hand-held.

IC Bus, a division of Navistar, is thought to be the frontrunner in exploring the viability of installing its own tablets at the factory. While the company has announced little information officially, it hinted in recent years that this would be a possibility as the OEM attempts to bring more integrated safety and efficiency tools to bus drivers, namely displaying routing and turn-by-turn directions, student tracking/RFID, communications, even video DVR. IC Bus launched its tablet-based OnCommand Connection Electronic Driver Vehicle Inspection Report (eDVIR) in 2018. The eDVIR, which promises more efficiency than paper-based and digital vehicle inspection solutions, enables school bus operators to digitally capture and share pre- and post-trip and child check inspections, speeding up the inspection process which enables faster repairs.

The motivation for OEMs installing tablets at the factory is customer driven. “We work with top bus solution providers to install customer-specific tablets,” said Sean Slyman, director of connected services for Navistar. “For example, Zonar systems help the driver by verifying that the driver went to each of the pre- and post-trip inspection points on the bus by touching the tablet to Radio Frequency ID tags. The tablet will send a report to the specified hub once the tablet has been docked. Many national accounts order this.”

A Tyler Technologies representative declined comment but noted that the company’s Drive tablet is also an IC Bus option.

Kevin Mest, senior vice president for passenger services for Zonar Systems, said installing technology at the factory is something that is being evaluated by all the bus manufacturers.

Mest explained that there has been an interest in installing tablets or tablet mounts to accommodate the growing use of the technology over the past couple of years. But as OEMs reviewed the engineering required, it became apparent that there were some inherent challenges.

“What tablet are you trying to support?” Mest began. “The mounting kit needs to support the size and weight requirements of the tablet. Unfortunately, there is a wide variety of tablets being used that continues to change, so how do you accommodate all makes? In addition, engineering a solution can take one to two years and the devices themselves continue to evolve and change. Lastly, many users have allowed drivers to use a mobile phone with appropriate restrictions, so they are moving away from a dedicated tablet.”

Industry consultant Derek Graham works with routing developer Edulog, and has spoken and written extensively on the pros and cons of tablet installation. Graham said that even though some of the same functions can be accomplished with an Android phone, he has noticed an increase in the deployment of tablets. But they were not necessarily installed by the OEMs.

“Definitely the use of tablets has been increasing. I am not seeing this trend from the OEMs but there is a definite trend among school districts,” Graham said. “It’s a lot more common that school districts would install it themselves or have it installed by a dealer and not at the OEM level. My speculation is that they won’t make it standard because not all school districts will have a use for it even though it is becoming more commonplace as the technology develops.”

Graham suggested that open architecture is the key to a successful effort to standardize the tablets, but even that should not be taken for granted. “We do a lot of work with stop-arm cameras, and it seems that you should be able to attach any camera head to the existing wiring,” he observed. “But that was not the case. There is still a lot of individuality among the technology solutions.”

Meanwhile, Bill Westerman, vice president of product management for CalAmp, said the challenge with tablets is the Android operating system updates much more frequently during the life span of a typical school bus.

“School buses have a long life span of about 15 years and technology updates every three to five years,” Westerman explained. “You’ve got an issue where technology on a school bus would become obsolete because the bus will last so long, unless you have some way to ensure they could update the operating systems.”

Westerman agreed that OEMs installing tablets would expedite the process and ease support, if they could overcome the challenges. “The bigger issue is as operating systems evolve over time, can the hardware support those operating systems? Will they be able to support and maintain the infrastructure given that school buses have a long life and technology changes faster?” he asked.

Westerman noted that while the theoretical advantage is simplified installation at the factory and not via a third-party, aftermarket basis, many school districts buy buses from more than one manufacturer, and they likely will have different vintages of a bus from the same manufacturer. “There still might be a situation where schools will have to invest in aftermarket tablets in the short and medium terms,” Westerman suggested.

Jean Souliere, CEO and founder of video camera and stop-arm enforcement firm BusPatrol, said OEMs installing the tablets would increase parental peace of mind. That would be a boon to student transportation.

“OEM tablet installations would be of higher quality than what is possible with any third-party, aftermarket installation,” Souliere began. “Docking stations for tablets, regardless of quality, still feel at least ergonomically like something that was ‘put there.’ The asset management considerations associated with these ‘docked’ therefore removable tablets is also something that pupil transportation professionals have to deal with, thousands of buses mean thousands of tablets to track, charge, assign, maintain, etc.”

“This would also accelerate the adoption of these applications by lowering the capital investment requirements that the hardware currently imposes on school districts,” he concluded. “This infrastructure platform would also allow tighter integration to student manifest applications which would enable more accurate parent apps, improving ridership visibility and overall safety.”

Zonar’s Mest added that in addition to addressing the mounting kit, another consideration is knowing and engineering where to mount it. “Unfortunately, this again varies by state, city and community on where a tablet can be mounted, in order to minimize driver distraction and also not to obscure the driver’s vision outside the vehicle,” he explained.

Mest added that to aid end users, most OEMs are doing a pre-wire to power the tablet that is installed post-factory.

Despite the considerations, Mest said it would be advantageous to school districts to have all technology installed by OEMs to save time, money and the aggravation. Westerman at CalAmp agreed.

“The desire the have these devices, whether a tablet mount or any technology installed at the factory is strong because performing this work post-production is time-consuming and expensive, compounded by the limited time to complete it, usually over the summer months,” he described. “For example, a school district could be tasked with installing a tablet mount, external and internal cameras, and a host of other technologies.”

Graham has included in his presentations about MDTs that if not properly placed, a driver can be distracted by the screen while the bus is moving or when students are loading and unloading.

Souliere said he favors anything that will expedite the process of keeping kids safe and called for cooperation in the industry to make sure the applications are compatible, adding that the tablet is a tool that can help accelerate the modernization of school buses.

“The modernization of the school bus is far overdue. For an industry to evolve it must change the way it defines value,” Souliere proposed. “[W]e believe that the more bus manufacturers contribute to the industry through the physical features available on their buses, like tablets, the more effectively and rapidly innovators like us can make the world a safer place for our children through the simplified adoption of our applications.”

Editor’s Note: As reprinted in the October 2021 issue of School Transportation News.