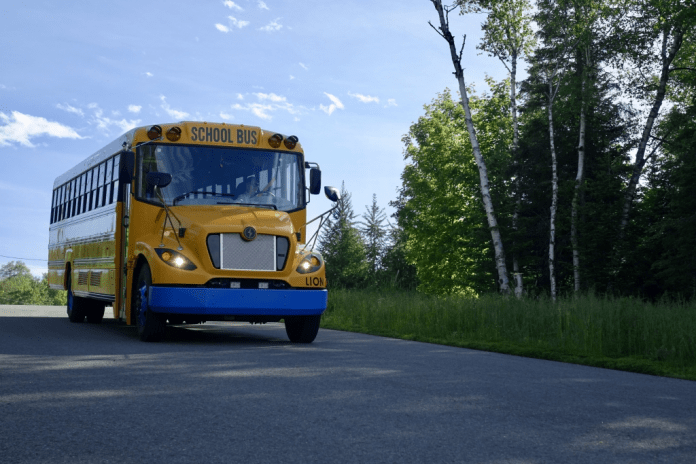 Nate Baguion, VP of sales for Lion Electric Company, talked about the updated features on all Lion Electric school buses, including a speaker that plays a song to warn kids the bus is arriving.

“Yeah, that’s one of the things. These aren’t loud, big, dirty, diesel buses. They’re quiet, they’re electric. So, when a bus pulls up to a stop, the kids won’t necessarily hear it. What we needed to do was put in a speaker so that it would play a song to let the kids know the bus was approaching, to keep them safe,” Baguion said in the segment.

Other features are that the buses run completely electric, meaning they do not have a tailpipe or exhaust fumes.

“This is a reality. This isn’t an experiment, or a pilot, or a concept,” Baguion said. The buses “are out taking kids to school in Sacramento every day. Sacramento is leading the country in the deployment of electric school buses.”

The segment on Good Day Sacramento said that Twin Rivers, a school district in Del Paso Heights, California, has the largest fleet of electric school buses.

The second segment which aired in the next hour, showed viewers the inside of the bus and how to charge the bus.

Charging the bus does take several hours, but can be carried out in more flexible times, either between routes or at night.

On a single charge, Baguion said the bus will go 155 miles, which covers a daily school bus route. Due to the fact that the bus does not run off of diesel fuels, you can plug it in and leave it charging, without having to constantly be standing there.

Another portion of the TV segment mentioned the blue bumper on electric school buses. California is working on a project to make all-electric buses with blue bumpers, so first responders know exactly what type of bus it is, if it were to be involved in a crash.

The last portion of the second segment looked under the hood. Instead of seeing an engine, the viewers saw wires, batteries and a charger.

“It’s a very simple efficient machine,” Baguion said. “And as you noticed earlier in the show, it’s quiet.”