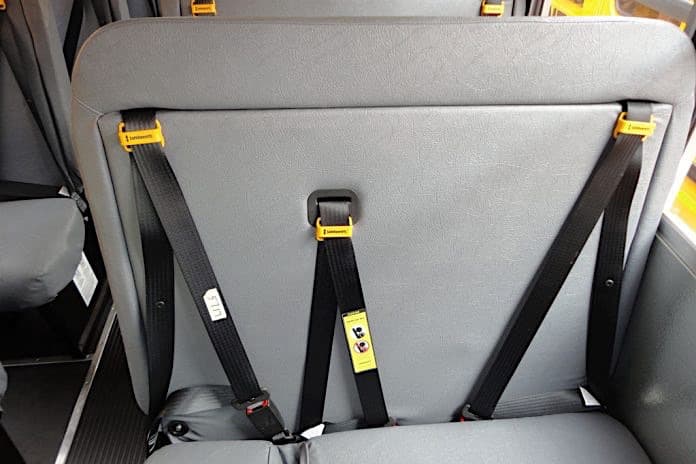 INDIANAPOLIS — For the past 18 months, transportation directors nationwide were consumed by COVID-19 and new safety strategies. A session at STN EXPO Indy reiterated the importance of lap/shoulder seatbelts on school buses.

The session on Sunday moderated by industry consultant Derek Graham, a former state director of student transportation for the North Carolina Department of Public Instruction and a past-president of the National Association of State Directors of Pupil Transportation Services, showed video footage from inside school buses equipped with and without lap/shoulder belts and discussed the additional benefits besides crash protection of the restraints. Graham outlined the results of a study published by the National Highway Traffic Safety Administration in January that he said received little attention due to the rising interest in COVID-19.

Graham noted that the study found most drivers reported the same or less stress with the safety restraints, and the importance of required use policy and student and driver training.

Matt Miles, the director of transportation for Metropolitan School District of Lawrence Township in Indianapolis, admitted that amid COVID-19 training on the restraints has not been a priority during the pandemic. “Not everything can be the most important thing all the time,” Miles noted, adding that instead, his department has focused on contact tracing and seating charts.

But he added that transportation leaders should be wary of growing complacent about seatbelt training. He shared that the timing of the conference session was apt as it reiterated to him the importance of the belts.

The district started installing lap/shoulder seatbelts about six years ago, and one-third of the district’s 200 buses have the technology.

Meanwhile, LaShone Mosley, director of transportation for Des Moines Public Schools in Iowa, said she sent a survey to her drivers following the installation of lap/shoulder belts in her district. She admitted that the district started installing the belts before she was at Des Moines, and she was not a fan of the safety technology, but her drivers were.

She found that drivers said the belts save lives, reduce injuries and improve student behavior. Due to student behavior improving she had happier drivers, which results in driver retention. Previously, Mosley lost drivers due to poor student behavior and no repercussion to the students while onboard the school bus.

Mosley noted that she was more concerned with students exiting the bus in a fire than she was about side-impact crashes, which stemmed her initial disdain of the belts. Plus, she said, school buses are the safest form of transportation for students. It wasn’t until a July 2019 demonstration during the Iowa Pupil Transportation Association summer conference, when a school bus was involved in a mock crash with dummies inside, that she changed her mind.

Now, she doesn’t feel comfortable with school buses going out on the road without lap/shoulder belts. While the cost for an entire bus to be equipped with the belts was about an additional $7,500, she said she would rather order one less bus per year than order a bus without the safety restraints. Iowa became the latest state to mandate lap/shoulder belts on all new buses purchased after October 2019.

Despite more widespread adoption, those in the audience with the lap/shoulder belts agreed with Mosley and Miles that enforcing student usage during athletic events is one of their greatest challenges. Miles said many of his coaches and athletes don’t use the restraints, despite their use being required and drivers instructing everyone on board to buckle up.

Mosley took it one step further. She now requires all local athletic directors to sign an agreement that coaches will follow the seatbelt policy. She said if her drivers notice that coaches and/or students are not following the policy, drivers will pull the bus over in a safe area and won’t proceed driving until everyone complies. If they’re late to the event, she said, that’s on the coaches and athletes.