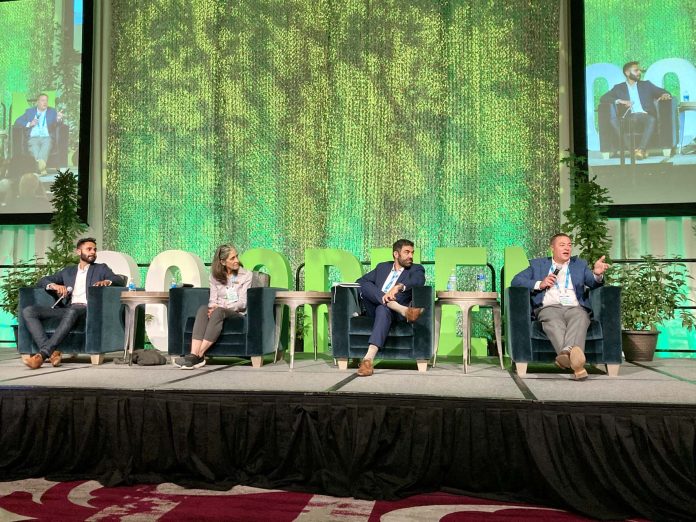 Arash Saidi, power engineering manager for the Los Angeles Department of Water and Power, recommended that transportation leaders start talking to their local utility early and include future plans in those discussions so the most accurate strategies can be designed. “There should be nothing left to ambiguity,” he advised.

This helps align timelines, so things are ready to go and the electric school bus (ESB) doesn’t just arrive and start drawing a large amount of unplanned power. It also reveals potential problems such as finding out a charger can’t be placed where originally planned.

“At the end of the day, [electrification is] the right thing to do, but it takes a lot of time and planning,” noted Nick Voisard, senior director of electric vehicles for North America at National Express, parent company of U.S. school bus contractor Durham School Services.

While a large fleet of ESBs can place significant demand on a power grid, school fleets are uniquely flexible in that they can work with the grid and make it work for them, McIntyre added.

Voisard and Susan Mudd, attorney and senior policy advocate for the Environmental Law & Policy Center, agreed that conversations should be had with utilities so mutually beneficial agreements can be reached.

Since the electric grid is so deregulated, supply and demand result in power being more expensive when everyone wants to charge in the morning and afternoon, and cheaper in the middle of the night, McIntyre said. Charge management companies like Highland enable school districts to purchase power at the lower rates.

Gagan Dhillon, co-founder of Synop, which provides smart charging for electric fleets and co-sponsored the Sunday session, spoke to the “now what” feeling that can kick in when transportation leaders have acquired ESBs and built the infrastructure, but may not know as much about the grid, charging rates, when to charge so money is saved, and other considerations.

“There [are] tools out there to take that off you and let you run the fleet you need to run,” he said. “It’s this whole game of optimizing your fleet charging or working with partners who have turnkey solutions for managing that.”

Saidi said that the data that school district fleets can send back to utilities is valuable, providing them visibility and better, smoother service.

Having visibility between both the fleet operators and the utility helps identify and solve problems quicker so uptime is increased, Voisard noted.

Mudd recommended ascertaining what a district’s unique interests are in electric school buses, such as what objections or questions the school board has or what clean vehicle goals the city has. “Think about the local and state context,” she said.

This is even more significant since electrification is being encouraged and even mandated at the state level, McIntyre said. Thinking that such compliance dates are far away belies the years that it could take to set up and jumpstart an ESB operation, he cautioned.

In states that aren’t as electrification friendly as California, Mudd said school districts and bus companies can push the process along, so funding is more readily available.

Utilities agree that reduced GHG emissions are good, so they’ll be eager to help, Saidi confirmed. While laws are quick and inflexible options, money is slower to follow so it is important to start conversations and partnerships early, he said.

He and Mudd underscored the goals of prioritizing funding to improve air quality for disadvantaged communities, stating that the “why” is crucial to getting things to proceed like the district wants.

While the EPA Clean School Bus Program’s $5 billion is a big, shiny number right now, McIntyre noted that most of the longer-term funding will likely come from state, local and utility programs. Therefore, it’s important to underscore the wholistic impact of electric school buses and their overall benefits on communities and citizens so the results can be achieved even if such extravagant funding is not available, he cautioned.

An attendee pointed out that transportation directors who are too preoccupied with driver shortages to delve into the details of electrification can avoid potential pitfalls and costly mistakes by involving a charge management company like Highland or Synop. McIntyre agreed that such companies are eager to be a resource for school district fleets looking at electrification.

An attendee in the audience expressed concern over ESBs sending energy back to the grid and potentially not having enough for the route the following school day. Dhillon noted that V2G is still a nascent technology but between the utility and the charge management company, it will be ensured that an operation’s electric buses are fully charged for the next day. Saidi added that optimization is the goal, which only gets better the more data is gathered.

Voisard reminded attendees that diesel buses have parts stolen or suffer from mechanical failures, too. Battery reservoirs and backups are available to avoid disasters with ESBs, he added.