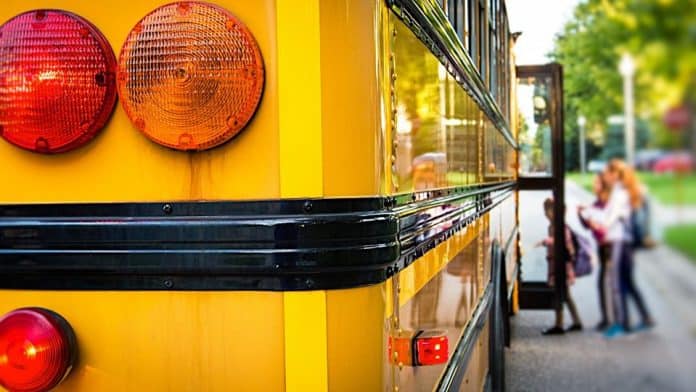 On Thursday, a 7-year-old was critically injured after being struck by a driver while attempting to board his school bus in Saint Paul, Minnesota. The school bus was reportedly stopped with its stop arm deployed. As of this writing, the boy remains in critical condition.

The incident occurred two days after Bethany Schubert, a member of the Minnesota School Bus Operators Association (MSBOA) executive committee, recounted recent testimony before the Senate transportation committee regarding a recently introduced bill that advocates for funding to create a public media campaign about the dangers the illegal passing. Both MSBOA and the Minnesota Association for Pupil Transportation shared information with legislators.

“It is really unfortunate that even though all of this media was out this week, about this being an issue, that these stop-arm violations are happening, that our children are getting hurt. It still happened two days later,” Schubert, who is also the vice president of Trobec’s Bus Service, told School Transportation News on Friday.

Last year, Schubert said a bill was introduced to equip school buses with stop-arms cameras but failed. This time, she said, the associations are taking a new approach but on a smaller scale.

House Bill 1010 and Senate Bill 1050 call for $50,000 in funding during the fiscal year 2020 to be appropriated from the general fund to the commissioner of public safety for an education and awareness campaign on motor vehicles passing school buses, according to the bill text. The bills were introduced on Feb. 11.

“During that meeting, [on Tuesday] there were senators that were brought to tears while watching the videos of these stop-arm violations and the close calls that we are experiencing on a daily basis here in Minnesota,” Schubert explained. “We have a big problem in Minnesota. It’s estimated we have 150,000 to 250,000 stop-arm violations every year, and we just really need that to stop before somebody gets killed.”

In the meantime, state officials were also drawing attention to the national driver shortage, which is affecting school districts statewide. Gov. Tim Walz declared Wednesday as School Bus Driver Appreciation Day across the state, with one of the goals being to highlight the school bus drivers that safely transport more than 760,000 students to and from school each day.

“That was one of the reasons that the MSBOA came up with School Bus Driver Appreciation Day, not only thank our employees but to create some media attention about the job that bus drivers do, and how rewarding it could be,” Schubert explained.

Schubert added that she hopes the day sparks interest in the general public and prompts job seekers to consider making school bus driving a career, a retirement option or part-time work.

“When we set out to do this four years ago, that was the intention, and it just turned into something that is so much more,” she explained. “Because being able to recognize our employees on a day that is just dedicated to them is really special. My heart feels so full at the end of the day because I know we made a difference, and what we did really mattered to our employees.”

Schubert said that all the companies serve the Saint Cloud Minnesota community, and while some might consider them to be competitors, they all get along for the better of the district. She said the event was hosted at the North Central Bus and Equipment dealership.

The team showed up the night before to decorate the building and set up for the waffle breakfast provided to all school bus drivers, assistants, mechanics, office staff, school board members and superintendents.

“This is the fourth year in a row that we have done it, and it’s nice to get all of our drivers together,” Schubert said. “They can create that commodity together among the different companies, and it is a fun day where we can celebrate all the hard work they do throughout the year.”

Schubert shared that Trobec’s Bus Service is short three to four drivers currently. But other districts and companies in the state are experiencing a greater shortage.

Thomas Burr, the transportation director at Saint Paul Public Schools, said on Tuesday that he is currently short 75 to 100 drivers. Burr said his team gets by day-to-day with the help of dispatchers, managers and trainers. But they continue to struggle with operating field trips routes.

He added that from September through December, the district added three new yellow bus vendors through emergency means. The district is currently utilizing seven vendors and use a number of additional outside vendors for field trips.

Bemidji Area Schools in Northern Minnesota is also experiencing a shortage of drivers.  Kala Henkensiefken, the district’s transportation special education manager, said that this past month she is short about six drivers on any given day. Up until last month, she added the district was doing “pretty good.”

However, she said due to drivers calling in sick and personal days off, she has had to rely on office staff and technicians to help drive.

Bemidji Area Schools also took part in celebrating her drivers on Wednesday with a waffle breakfast, a yogurt parfait bar and donuts from the local bakery. She said the breakfast items were donated from the schools. Every driver also walked away with a coffee mug.

“With the driver shortage that is out there, I think it’s even that much more important to let them know that we really do appreciate you,” Henkensiefken explained.

She said Bemidji has been celebrating its drivers for the past three years, but the state is going on its fourth year of recognizing the day. This year, many of the district school campuses got involved and students made cards for the drivers as well as providing gift cards.

“It was really a day about recognizing our drivers and showing our appreciation,” Henkensiefken explained. “They are the people out there all over the community, picking up our children, but we tend to forget about them sometimes and how important they are. They are an important piece of getting our students to school and getting our students back home.”