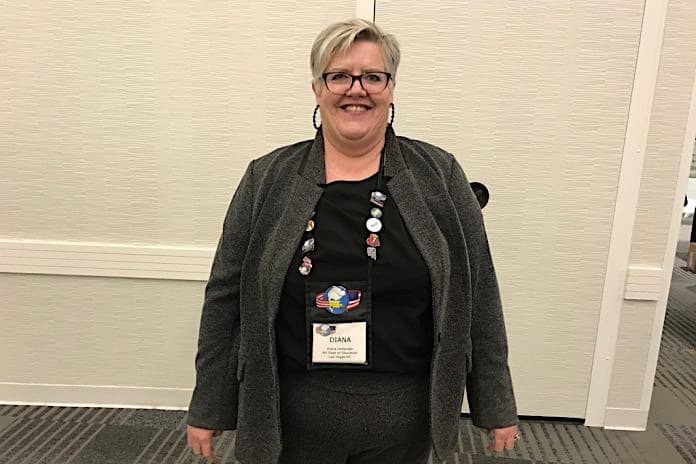 Diana Hollander, the director of pupil transportation at the Nevada Department of Education, is set to retire after 25 years. She reflected this week with School Transportation News on future plans for both herself and the industry, and she discussed some of the biggest perception shifts she has witnessed during her career.

The past-president of the National Association of State Directors of Pupil Transportation Services (NASDPTS) celebrates her last official day with the department on Friday. But her final days on the job will actually be spent in Lake Tahoe, Nevada attending the 2019 Bicycle and Pedestrian Summit, presented by the Nevada Department of Transportation and Eastern Sierra Trails Coalition.

New three and half-mile walk and bike paths were recently built in Tahoe. The Tahoe East Shore Trail spans from Tunnel Creek Café in Incline Village to Sand Harbor in Lake Tahoe Nevada State Park. It opens to the public on Friday.

Hollander serves on the Nevada Bicycle and Pedestrian board as well as the Nevada Executive Committee on Traffic Safety. On Wednesday, she was honored as 2019 Board Member of the Year.

Despite her retirement, she said she still hopes to remain involved in the industry in some way. In fact, she said she will be serving on a Child Safety Advisory Board with transportation network company HopSkipDrive.

“I have been blessed to have a job I have loved for the past 25 years,” Hollander said. “Not many people can say that. And I have met lifelong friends, so I am hoping there will still be a niche for me.”

She said it’s not always plausible or possible for every child to be transported in a school bus, even though the mode boasts the highest safety record. For example, Hollander noted that because children who are homeless and live in foster care tend to move around a lot, the school bus isn’t always accessible.

HopSkipDrive will be contracting with the Child and Family Services for Homeless and Foster Children who attend Clark County School District in Las Vegas.

“The number one goal is to get kids to school, no matter what,” Hollander said. “They have to get to school.”

Besides future industry endeavors, Hollander will also be taking time to focus on her personal goals once she retires. This includes getting more exercise, cooking more and personal rather than work travel. She also said she is going to grow a home garden that at least offers tomatoes.

“Which is hysterical, but I am going to do it,” Hollander said. “And do more things that I don’t normally do because I am always working or because I am too tired.”

Once Hollander retires, the Nevada state director position will be relocating to the state capital in Carson City from Las Vegas. While Hollander said she doesn’t know who will serve as the next Nevada state director, she shared advice for that person. She reminded that the new hire must take their time and learn the laws and regulations.

“I did not know anything about school buses, I didn’t even ride a school bus when I was a child,” Hollander said. “I knew nothing when I started, and that was quite the curve, and when you are working with people who have been doing it for a while, you have to know your stuff.”

She said other challenges are uniting school districts across the state and stakeholders to come to a mutual agreement on issues that might be a best practice but not necessarily a regulation. Hollander added that when she first started, she surrounded herself with industry veterans who she could lean on and who she could learn from. Her advice to the new state director is to listen, learn and ask questions.

A Shift in the Great Debate

Meanwhile, Hollander shared the two biggest industry shifts that she witnessed throughout her career. One of them was regarding lap/shoulder seatbelts in school buses.

“The biggest shift ever in the history of school transportation is the shift to promoting and supporting, like NASDPTS did, lap/shoulder belts,” Hollander said.

Hollander added that the three associations, NASDPTS, NAPT and NSTA try to make their positions together, however, in this instance, NASDPTS felt it needed to break away and make a change in their position on lap/shoulder seatbelts.

A year after NASDPTS announced its position, the National Highway Traffic Safety Administration (NHTSA) announced that “every child on every school bus needs a three-point seatbelt.”

However, NHTSA has refrained from publishing a federal requirement for lap/shoulder seatbelts in large school buses, instead opting to leave the decision to states and local jurisdictions. Three-point seatbelts were required for Type A school buses in 2008.

In 2016, the National Safety Council joined in the appeal for the inclusion of safety restraints for child passengers.

However, at that time the NAPT and NSTA expressed concern that students might not correctly wear the belts and that the restraints could impede evacuation in the event of an emergency. The associations questioned how mandating lap/shoulder belts could impact the industry economically and wanted data to support the safest environment for children on the school bus.

Currently, the NAPT and NSTA said they don’t oppose seatbelts, but they added that the financial impact of purchasing school buses equipped with the occupant restraint systems or retrofitting existing buses to have them could result in fewer children able to ride in the yellow vehicles due to school district budget cuts, and they said seatbelts could impede emergency evacuations.

“Back in the day, people would want to fistfight you,” Hollander said. “That’s how passionate, and how ingrained that lack of support for lap/shoulder belts in school buses was. I mean, I was like ‘holy cow,’ because I never believed it, and I took a lot of heat from my belief that they were wrong. And so that shift has been historical.”

Executive Director of NASDPTS Charlie Hood said at the 51st NASDPTS annual conference last month that the association is planning on further strengthening its position paper on lap/shoulder seatbelts. Currently, NASDPTS supports the installation and use of lap/shoulder belts in the school bus, but it stops short of advocating that the installation and/or use be required.

Another change Hollander mentioned is the shift in attitude from, “We have the best safety record’” to “How can we be better?” She said now conversations are not solely based around fatalities but injuries as well. Hollander said that the industry as a whole seems more open to change in technologies, even though it could increase the price of the bus.

However, going forward, Hollander anticipates autonomous vehicles and more parent transparency. Hollander noted that currently, the industry doesn’t do a great job in promoting the school bus and the safety of it. She added the industry needs to be more transparent and service-oriented to parents.

Hollander said a major misconception is she doesn’t believe parents think the school bus is safe, especially without lap/shoulder seatbelts and amid concerns about on-board bullying.

“How do we change that, where parents demand more services, where parents go to the [school] board and say, we want our kids in a school bus,” Hollander said. “But parents don’t understand. So, for me, we have done a crappy job of educating the public and our parents on the benefits of school buses. And that kids are 70 times more likely to get to school [safely] than in your own vehicle. Parents don’t know that.”

She added that lap/shoulder seatbelts could be the first step in shifting parental perceptions.

Going forward, she said education and information need to be more accessible to parents to keep school bus services from becoming obsolete. This is accomplished, she added, by the industry doing a better job of promoting the benefits of the yellow school bus.

In terms of autonomous vehicles, Hollander still foresees a human driver or operator playing a large role in terms of student behavior management. She said the vehicle, however, will operate automatically, similar to the auto-pilot function on commercial airplanes.

“We could severely reduce crashes or eliminate them,” Hollander said. “My vision is zero-zero injuries and zero fatalities. That’s my vision.”

As Hollander heads towards retirement, she noted that she will miss the people most of all. She said people in school transportation really care about what they do it, that it’s not for the glory or the money. And while she hopes to stay close with the people in the industry, she said it’s time that the younger generation take over.

“It’s so much fun, I love the trade shows, the people, lots of hugs, friends that I hope I’ll see even though I won’t be around,” Hollander said. “But it’s out with the old and in with the new. There is a younger group of people coming in, and we need to move aside and make way for them, for them to find their ways. Just like we did.”