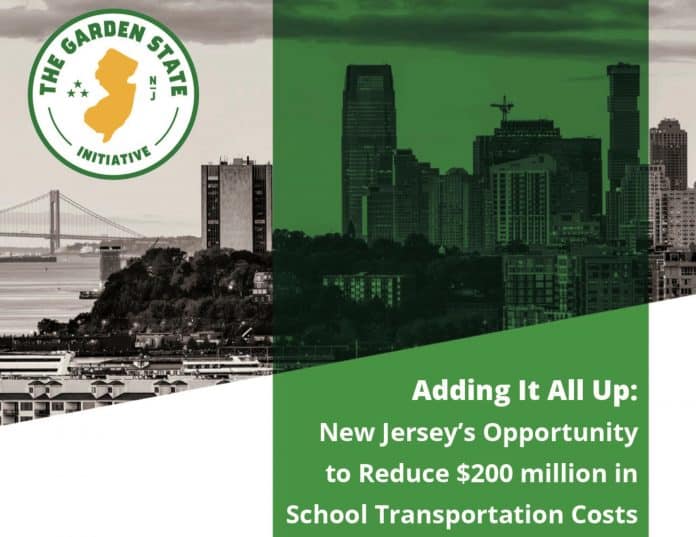 A provocative new study claims New Jersey could cut $200 million in its annual school transportation costs. “The percentage of special needs students proved to be the strongest predictor” of costs per student, the study found.

Improvements are possible, according to the 9,500-word Garden State Initiative study released this week, by implementing several programs that have been used successfully by other states. Among these are staggering bell times, standardizing ride times, packaging bids with tier routes, combining school calendars, and implementing joint municipal-school district procurement.

The Garden State Initiative is a 501(c)3 nonprofit organization that promotes new investment, innovation, more jobs and economic opportunities in New Jersey. The study was the second in a five-part series on how the New Jersey state government can operate more efficiently and cost-effectively.

The authors said they attempted to accurately assess if substantial budget cuts or better efficiencies can be made in New Jersey’s annual transportation budget, in order to slash the transportation costs per student. The study concluded that routing policies are not remarkably different among the several states that were examined.

The study reviewed disparities across districts, and possible technology solutions that its Garden State Initiative suggests could reduce the current taxpayer burden. It also discussed key policies in several states that New Jersey could emulate in its attempts to reduce spending, especially Washington and North Carolina.

New Jersey school districts or private bus companies contract with transport nearly 750,000 students daily at an annual cost of $1.2 billion, the report found. While there was a wide range of per-pupil transportation costs, the study arrived at an average of $1,508 per bus rider, with the middle 50 percent of school districts spending between $1,160 and $3,361 per student.

But over three-dozen districts spend over $10,000 per student, with many of these variations linked to transporting students with disabilities.

The authors said the analysis shows that there is far more variation among districts that share socioeconomic characteristics, than between each socioeconomically distinct group. For example, the study found that poorer, urban districts are generally not overspending “remarkably more” than wealthier suburban districts.

The report found that if every district were able to make meaningful improvement relative to where they’re starting from, they could save almost $200 million on transportation costs. “But, if every school district just spent at the expected amount predicted by their fundamental characteristics, taxpayers would save $146 million.”

Student Transportation Trends Across the States

The proportion of students transported to school (nationwide) reached its height in the 1980s, when approximately six out of every 10 students were transported at public expense. This figure has slowly fallen to just under 55 percent in 2007-08 (the last year for which data was available). Federal data projects that per-pupil costs in constant 2016 dollars rose until this time but flat-lined thereafter.

Some states have achieved benefits through consolidation and leveraging economies of scale. The authors wrote that a natural example of this can be found in Maryland, where school districts collectively spent $672.5 million to transport 623,204 students.

The study found that this ridership translates to a cost of $1,079 per pupil, or $429 less per student than in New Jersey. The study determined that Prince George’s County School District outside of Washington, D.C., exhibited the highest per-pupil cost in Maryland, at $1,492 per student, roughly equivalent to the average New Jersey district.

North Carolina districts, meanwhile, collectively spent $613 million to transport over 753,000 pupils during the 2017-2018 school year, which the study authors said is equivalent to $814 per student, or just 54 percent of the per-pupil cost in New Jersey. The median North Carolina district spent $876 per student, while only two districts spent more than the New Jersey state per-pupil cost.

With 768,953 students provided transportation or aid in lieu of transportation services, this equates to approximately $1,508 per pupil transported, or about 9 percent of the statewide median per student budgetary spend.

“If all districts spending more than (our) model were to make policy and operational changes to meet predicted spending levels, the statewide savings would be $147 million. However, no one model is perfect,” said the Garden State Initiative study. “Naturally, smaller savings are realized by districts with (a) larger share of special needs and nonpublic students transported.”

The study made several recommendations:

The authors said other recommendations by the New Jersey Department of Education are operational in nature, including:

Looking at a Montgomery County, Maryland, as an Example

Montgomery County Public Schools’ Department of Transportation has over 1,700 employees and over 1,300 buses with a $109 million budget. The county received $43 million in transportation aid revenue from the state.

The data shows that over 20 percent of transported students [in] low socioeconomic school districts, are special education and special needs students. [That rate is] far higher than [in] wealthier districts.